On June 4, I attended a talk and book signing by Dr. Michael Kudish for his new book, Where Did the Tracks Go in the Catskills?  It's the fourth volume in his series called Mountain Railroads of New York State (available from Purple Mountain Press).  As Mike emphasized in his talk, the focus of his series on railroads is on the geography, not the detailed history of the railroads themselves.  His series covers railroads that were built and those that were only partially built and never completed.  One of those uncompleted railroads was the Delaware Railroad Company - the strongest attempt to bring the trains into Bovina.

I've reported on the Delaware Railroad Company, created in 1898, in several blog entries.  I reported on Mike's work to identify where the rail bed was located in entries on May 12 and November 8, 2009 and April 26, 2010.  This past March, I did a four part series about the railroad.

Just this month, Tom Hilson shared with me a recently unearthed cache of materials in his family papers related to the railroad.  The materials included the prospectus for the Delaware Railroad Company.  He also has lists of subscribers for buying the right of way and lists of stockholders (which I will share these in future blog entries).  Here's the text of the prospectus.  Note that the prospectus calls the railroad the Delaware Valley Railroad, though that is not the name that was in the incorporation papers.

Delaware Valley Railroad Prospectus
The proposed DELAWARE VALLEY RAILROAD is to be built from the village of Delhi, the county seat of Delaware County, N.Y., from the terminal for the Delhi branch of the New York, Ontario & Western Railroad, to the villages of Andes and Bovina Centre, a total distance of 15 miles.
The consent of the property owners along the line has all be secured, permitting the construction of the railway along the highway, or the so called Delhi and Middletown turnpike.
The villages of Andes and Bovina Centre have no outlet to a railroad, the nearest being 12 miles over a long and steep hill to the Ulster & Delaware Railroad, at Arkville, or 12 miles to the New York, Ontario & Western Railroad, at Delhi, over this proposed route.
The people for at least 7 miles beyond Andes will haul freight to and from the proposed railroad at Andes.  To reach Bovina Centre, a branch will be run intersecting the main line, reaching people for at least 7 miles beyond Bovina Centre who will haul freight to and from this terminus, making the length of territory covered by this railroad over 30 miles.
The territory to be covered by this railroad is as fertile as any in the State of New York, and a noted dairying section.  The milk and freight traffic on this proposed railroad will be a large and profitable one, and the company will at once obtain a large business from this item of freight alone.
The proposed railroad follows the Little Delaware, a branch of the Delaware river, and the grades encountered are comparatively easy, costing less than $3,000 per mile in the construction of the road bed.
We are positive that a personal examination of the route will prove conclusively the correctness of this statement, and the prospective earnings hereto attached, and would invite examination as to the correctness of our statements.
This statement does not include the villages of New Kingston, Margaretville, Arena, Union Grove, and Shavertown, all of which are within a distance of ten miles from the road. 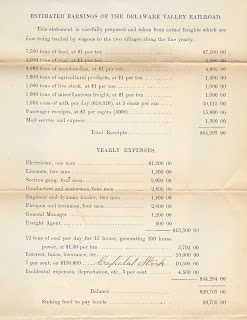 The second page of the prospectus provided information on the cost of the railroad.  An image of that page is above.
I will provide a list of people who bought stock and subscribers to the right of way in future blog entries. Many thanks to Tom for sharing this with me and allowing me to share it with you.
Posted by Bovina Historian at 8:00 AM