Stories from Bovina's Cemeteries - "An Infant of Robert and Hannah Scott"

Back in the 1910s and 1920s, when David Fletcher Hoy was working on family history, he made a concerted effort to identify all burials in Bovina, including private cemeteries.  He found on what was then the Wallace Smith place one small lone grave that he thought read "Dau Infant of Robert and Hannah Scott."  In the 1970s, Ed Davidson, David Hoy's great-nephew, located the stone again.  On their annual visit to Bovina this year, Ed and his brother Dick continued their work to document all burials, including noting the GPS coordinates!  So Ed wanted to get back to this grave to record the latitude and longitude.  On Monday, September 24, we made a trek on what is now property owned by Peter Schjeldahl and Brooke Alderson to locate this stone.  Brooke gave me directions, but Ed recalled it being closer to the river.  After no success by the river, we decided to follow Brooke's directions up the bank a bit.  We got to a point where she said that if we got there, we would be going too far.  Dick and I turned back but Ed felt we hadn't quite reached where we would have overshot the grave and sure enough, he found it. 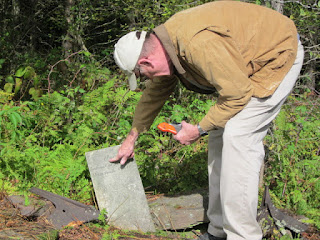 After some discussion, and sharing it with a gravestone group on Facebook, we've determined that this says 'An Infant of Robert & Hannah Scott."  When David Hoy saw it, he misread the 'An' as 'Dau.'

What do we know about this infant?  Very very little.  The property where this grave is located was leased from Janet Livingston Montgomery in 1815.  Robert Scott was born in Peebleshire, Scotland in 1780.  His wife, Hannah Turnbull, was born in Scotland in 1779.  They had eight children, including this infant.  I suspect that this child may have been stillborn.  The fact that the stone doesn't say son or daughter could mean the child was too early term for the sex to be determined.  Of course, it could also be that 'infant' was easier to carve than 'daughter.'  We'll never really know.  Another bit of information we do not know is when the child died and was buried here.  David Hoy suggested the child died around 1800, but given that Robert Scott was not leasing this farm until 1815, it seems more likely that it happened after that date.  The last child of Robert and Hannah, their daughter Elizabeth, was born they year they took the lease on the farm.  I think it's possible that the child was born after 1816.  Hannah died in 1839.  The Scott family had the farm until after Robert's death in 1852.  Robert and Hannah are buried in the old Associate Presbyterian Church cemetery.

Many thanks to the current property owners, Brooke and Peter, for allowing us to visit this grave.  And thanks to them also for ensuring that the grave is protected with a small stone wall.  And yet another thank you to Ed and Dick Davidson for all of their hard work documenting Bovina burials.  Their latest efforts have included putting gravestone photos and information on 'Find-A-Grave.'  The link is at: http://www.findagrave.com/cgi-bin/fg.cgi?page=csr&CScn=Bovina&CScntry=4&CSst=36&CScnty=0

The October 5, 1934 issue of the Catskill Mountain News contained this little tidbit about one of the Gerry Family of Lake Delaware:


On September 27, thanks to Andy Wos, I found out why Angelica spent autumn at her home.  Angelica, the daughter of Elbridge T. Gerry and Louisa Livingston Gerry, is remembered as the builder of St. James Episcopal Church.  Not long after the church was built, she built her home, Ancrum, named for a town in Scotland from which her ancestors hailed.  Angelica died in 1960 at the age of 89.  In 1963, the family demolished the house because of the taxes.  I remember seeing from Route 28 the house being dismantled.  With the growth of trees, you can no longer see the site from 28. 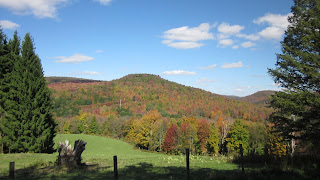 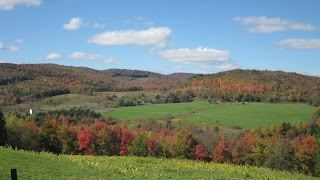 Angelica's brother, Robert, also built a home on the estate.  Aknusti was built in 1913 and had a number of famous visitors, including Franklin and Eleanor Roosevelt.  The house suffered a serious fire in 1953.  Some of the fire damage still is evident.  Here's the view from the front terrace. 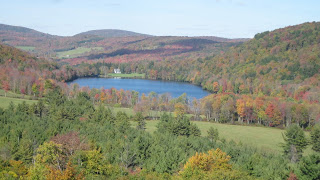 Robert died at Aknusti in 1957, the same day that his brother, Rhode Island Senator Peter Gerry, died in Providence.  Robert is buried in Lake Delaware, as are Peter and Angelica.

I will be doing future blog entries on the Gerry family and their connections to Bovina.
Posted by Bovina Historian at 9:09 PM No comments: