Stories from Bovina's Cemeteries - Where is William Thomson

The single most common first and last name is William Thomson.  There are 10 different William Thomsons buried in Bovina. They are not all related to each other, though some are.  Here are photos of some of the William Thomson monmuments, courtesy of Ed and Dick Davidson. 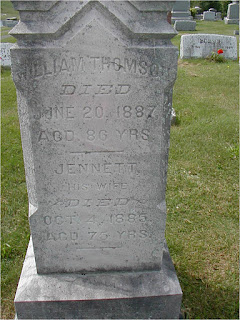 This is the oldest William Thomson buried in Bovina.  Born in Scotland in 1801, he was the son of Andrew Thomson and Margaret Blythe.  He and his wife, Jennett Hamilton, had six children, including a son, William B.  The son was born in 1843 and died in 1929.  He also is buried in the Bovina Cemetery, but for some reason, no stone exists for the gave. 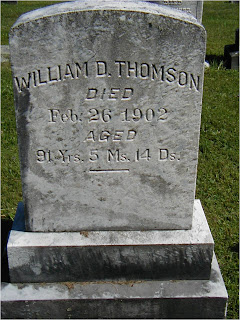 There is some confusion in the records concerning this William Thomson, though most have the Thomson without the 'p.'  The son of David and Jennette, he and his wife Agnes had four children.  One of them was William Henry Thomson, whose stone is below. 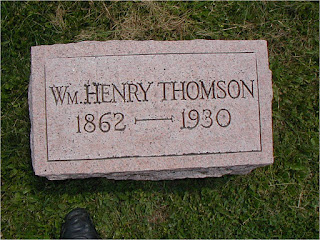 William's brother David Lowe Thomson named one of his son's for his brother.  William David Thomson lived to be almost as old as his uncle, dying in 1958 at the age of 90.  He too is buried in Bovina. 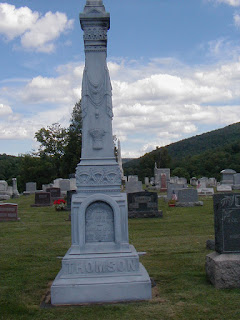 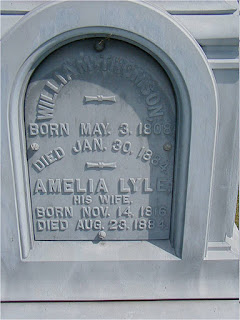 This William Thomson was the son of Andrew Thomson and Elizabeth Rutherford.  He was born in Delaware County, but his wife was born in Scotland.  They died within a few months of each other in 1884.  William and his wife Amelia had four children, including two sons, Andrew Dixon Thomson and David Lyle Thomson.  The Thomson brothers both died in January 1890.  Note that William and Amelia's monument is made of zinc. 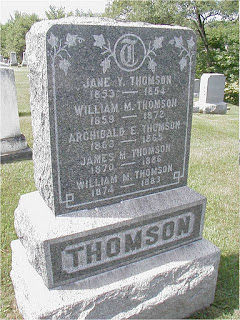 These two William M. Thomsons on this one stone (along with the other names on the stone) were the children of Walter E. Thomson and Jane Murray.  The first William died in 1872 at the age of 13.  Jane had another son after his death and, as was common in the 19th century, they named the newborn son after the son they lost.  This second William was only 9 when he died in 1883.  There are three other children of Walter and Jane on this stone, all dying before reaching maturity.  Walter and Jane had twelve children, but it appears that only 3, a son and two daughters, made it to adulthood. 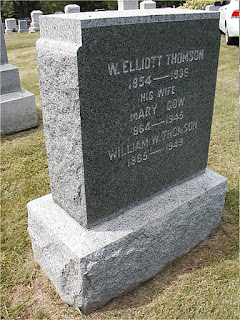 This stone is that of one of the 3 surviving children of Walter Thomson, W. Elliott Thomson.  Note that he named one of his sons William W. Thomson.  The son is buried here with his parents. 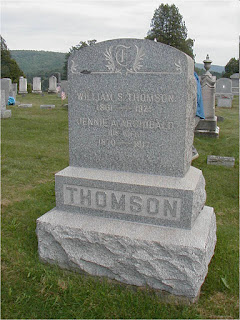 William S. Thomson was the son of Andrew Thomson and Margaret Isabella Scott.  Married to Jennie Alice Archibald in 1890 in Bovina, they had three children.  This William is a grandson of the 'first' William mentioned at the opening of this blog.

In reviewing records about these various Williams, I sometimes noted Thomson spelled as Thompson.  In the Bovina Cemetery, however, all the monuments for the Williams I found consistently use Thomson.  There is one grave without a stone, however, for a William Lyle Thompson.  The son of Rev.  Marvin Thompson and his wife, Leona Thomson.  Yes, both of William's parents were Thompsons, but with different spellings.  His parent's headstone clearly shows the different spellings in the Thomson/Thompson last name.  His mother's grandparents happen to be the William and Amelia Thomson mentioned earlier.  And though William has no headstone, there is one for his brother, Robert, and it has the Thompson spelling.
Posted by Bovina Historian at 6:52 AM No comments:

With help from the Town of Bovina and the Bovina Historical Society, I am working to reinstall Bovina's World War II Honor Roll (see my blog entry for June 3, 2011 concerning this Honor Roll).  I also need some help from you.

There are 94 names on the roll.  Through my own knowledge and through the use of Ancestry.com and other sources, I've been able to get enough information on about 2/3 of the names on the list, including birth and death dates.  In the  process, I have identified three people on the roll that are still with us - Ed Davidson, now living in California, Gordon Rabeler, who is in Rockland County, NY, and Stanley 'Stub' Hewitt, who lives in Lake Delaware.

Below are 32 names for which I need some clarification of information I have found or for whom I have no information at all.  I have included birth and death years when I have found those.  For some people, I did find information on Ancestry.com, but because the name is relatively common, I'm not sure in all instances if I have the right one.  I also included text that came from an issue of the 1946 Walton Reporter that provided information on soldiers from Delaware County.  If there is no information, that means I could not find their names - at least in the section marked 'Delhi Draft District.'

So, if you know this person or know someone who does know him (or in one instance here, her), please let me know.  I'm also going to be trying to get photographs of everyone on the roll - preferably in uniform - so if you have photos or know someone who does, I'd appreciate that too.  Drop me a line at bovinahistorian@gmail.com or put any information you wish to share in the comments field at the end of this blog.  Thanks folks.  Any assistance will be greatly appreciated.

Alexander Gill was born in Bovina in January 1839, the son of James and Mary Gill.  He enlisted in September 1862 in the 144th NY Volunteers as a corporal.  He was a sergeant at his discharge on July 12, 1865.  Alexander married Agnes Radeker in Downsville.  He moved to Montrose, Pennsylvania, working as a carpenter.  He died in March 1899 in Pennsylvania.

William T. Gillie was born in Bovina in Apirl 1844.  He enlisted in August 1862 in the 144th NY Volunteers, Company E and was paid $100 for doing so.  He died of typhoid fever at a hospital in Washington, DC on August 6, 1863 and was buried near the hospital.  He was only 19 years old.  There is a memorial stone for William Gillie in the Bovina Cemetery.

Thomas Gordon was born in Scotland and was a resident of Delhi when he served in the war.  He was in the 79th NY Infantry, enlisting September 7, 1864.  He was discharged May 30, 1865.  Thomas was married twice, first to Mary J. Oliver, who died in 1897, and then to Mary R. Scott, who survived him.  He taught in Bovina schools for many years and was noted for his excellent penmanship, which was useful in the years he was Bovina's Town Clerk.  Thomas was active in the local veterans organization, the Grand Army of the Republic (GAR).  Gordon was Town Clerk when he died unexpectedly in April 1921.  His daughter Margaret was a noted Social Studies teacher at Delaware Academy.

Francis Gowanlock was born in March 1843 in Bovina.  He enlisted in August 1962 in the 144th NY Volunteers and was mustered out in June 1865, returning to Bovina.  Gowanlock worked as a stone mason and in 1874, married Jane Liddle.  In the 1890 special census, he reported that he suffered from fever and ague as a result of his service in the war.  He also noted that he was shot in the leg.  Gowanlock died New Year's Day, 1918 and is buried in Bovina.

George W. Graham was born in Bovina in 1845.  He enlisted in August 1862 in the 144th NY Volunteers as a private and was paid a bounty of $100 for doing so.  Promoted to 2nd lieutenant, Graham later had to resign because of ill health in September 1864.  He left Delaware County sometime after the war and settled in West Virginia, where he married Sophia Bilson in Harper's Ferry.  Later, he married Jennie E. Marshall as his second wife in Woodstock, VA.  In the 1900 census, he was a life insurance agent and on the 1910 census, he said he was an attorney.  George died in 1916 and is buried in the Bolivar Cemetery in Jefferson County, WV, outside of Harpers Ferry.
Posted by Bovina Historian at 11:00 AM 3 comments:

"Why Is The Lady Happy?" - Bovina Historical Society's Afternoon at the Museum

This Saturday (May 12), the Bovina Historical Society will host a reception/exhibit at the Bovina Community Hall from 4 to 6 pm to display over 100 artifacts from the recesses of Russell's Store.  The eclectic mix of items includes baking products, clothing, shoes, and advertising pieces.  Parson's Smut-Off, Best English Monarch Brand Bath Brick, Dr. Claris' Fever Medicine, Saturn Bias Velveteen Skirt Binding, Putnam Dyes-Tints, and Socony Auto Spring Oil are just some of the products that will be on display.  Some things from the Russell family also well be on display, including Isabell Russell's wedding dress and her mother's steamer trunk.  The exhibit also will include a couple of artifacts from previous owners of the store.

Some samples from the exhibit: 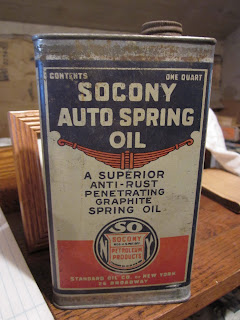 And here's a photograph dating from probably the 1930s of Cecil inside his store. To the right toward the back of the store is a large coffee grinder that can still be seen at Russell's.

And Why Is The Lady Happy? Come to the Bovina Community Hall on Saturday, May 12 from 4-6 pm and find out - and to support the Bovina Historical Society in its mission to preserve and present the history of the town.  Donations will be much appreciated.
Posted by Bovina Historian at 9:01 AM 2 comments: