During my initial skim of the census records, one thing that struck me is in this census, unlike the 1860 one, there are people that I recall from my childhood and young adulthood. Some of them included:
Both of my paternal grandparents also are in the census:
Other names I remember from my youth include Cecil and Isabell Russell, Bill Burns, Les Hoy, Leroy Worden (another neighbor from my childhood), Helen Gladstone (Mrs. Robert Hall), Henry Monroe, and Margaret Gordon, who was my social studies teacher in 7th grade.

There will be more coming about this census once I get the data into a database so I can do some analysis. How many of the 912 people in Bovina were going to school? How many were employed? And at what occupation? Were family sizes bigger or smaller compared to 1860?

So watch this space for further developments.
Posted by Bovina Historian at 11:00 AM No comments:

The 3Rs in Bovina - The Numbers

This is an entry that first saw the light of day as an article in the Bovina Community Newsletter, produced by the Bovina UP Church, in 2006. It ties to some of the census information I've been providing lately, so this seemed like a good time to share this.

In 1820, the year Bovina was founded, one third of the town's population of over 1200 was made up of children aged five to fifteen. A little over half of these children actually attended school in one of the town's five school districts that year.

By the 1850s, Bovina had thirteen districts. Some of these districts were joint districts, overlapping with Delhi, Andes or Middletown. The number of school-aged children was close to 600.

After the 1860s, as the town's population dropped, so did the number of school children. In 1878, 282 out of the 360 school-aged children in Bovina were being taught in the town. By 1909, ten of Bovina's eleven school districts were still operating their schoolhouses, but the number of children attending was down to 180 students.

In 1936, Bovina was down to nine districts, with two of these contracting their children out to other schools. Bovina had 127 children attending school through the 8th grade that year. Part of the reduction in school districts was caused by the creation of central school districts in Andes, Delhi, South Kortright and Margaretville. At the end of the 1930s, only seven districts were still in existence in Bovina.

The last school to operate in Bovina was Bovina District Number 4, which is now the public library. That school closed after the completion of school in June 1961. (I missed attending school here by one year - I started school in the fall of 1961 in Delhi.)

If you want to see some pictures of Bovina's one-room schools, go to my Flickr page. And if you have pictures you would like to share, please let me know. And stayed tuned for future blog entries about Bovina schools.
Posted by Bovina Historian at 8:06 PM No comments:

On Sunday Bovina lost another one of its long time familiar faces with the death of Jack Hilson (his obituary is in the Daily Star at http://www.legacy.com/thedailystar/Obituaries.asp?Page=LifeStory&PersonID=139551588). Jack was a life long Bovina resident and a descendant of one of Bovina's oldest families. I remember Jack as the proprietor of Hilson's Store and Hilson's Feedstore, along with his brother Alex. 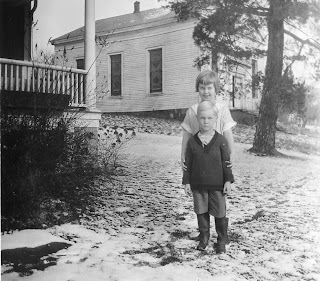 I also remember Jack as a great source on Bovina town history. Jack recalled that as a youngster, he had roller skated in the old Bovina Methodist church building, which was next to his boyhood home. This information helped me narrow down when the building was demolished - I finally found a newspaper article about the demolition in April 1926. Here's a picture of Jack and his older sister Louise in front of the church, probably not long before the church was torn down.

When I started working on this entry, I checked out a brief biography of Jack's great grandfather, the first John Hilson, sometimes known as 'Old Jock.' This biography comes from the 1895 Biographical Review of Delaware County. I include it here partly because of the number of similarities between Jack and his great grandfather. Jack's ancestor was a farmer and a merchant, like Jack, and was actively involved in the community, also like Jack. They both were members of the Bovina United Presbyterian Church - Jack had recently been honored for his 76 years of membership.

"JOHN HILSON, one of the most successful businessmen of Bovina Centre, was born in Scotland on May 25, 1827, the son of Alexander and Elizabeth (Nesbit) Hilson. ... John lived at home with his parents until his twenty-third year, being educated in Scotland, and learning the plasterer's trade of his father. In 1850, at the age of twenty-three, he came to America landing in New York after a pleasant voyage of only thirty days in a sailing ship. He came directly to Delaware County, and settled in Bovina, where he followed his trade for more than four years. In 1855, the year after his marriage, Mr. Hilson bought a farm of a hundred acres, where he started a dairy, having fifteen cows to commence with, and increasing the number to twenty-five during his seventeen years of farming. He has owned three different farms in Bovina, and now has a splendid one of two hundred and six acres, besides his residence in Bovina Centre.

"In 1845 he married Hannah S. Hamilton, a daughter of Robert Hamilton, one of Bovina's hardy pioneers. He started a large general store in 1867; and, before retiring from business, in 1889, to return to Scotland for a summer's visit, he had built up a very good trade. Since his return Mr. Hilson has speculated somewhat in butter, but has engaged in no active work, leaving his son Alexander to take charge of the store, in partnership with Mr. Blair. Alexander Hilson, born in 1855, is the only child of his parents. He was married in 1880 to Isabell Archibald; and they have two children, John [Jack's dad] and Jane Hilson, born in 1881 and 1885 [I have 1888 and 1891 respectively as the birthdays of John and Jane].

"John Hilson has a large circle of friends, he and his wife being members of the United Presbyterian church, wherein he has held the position of Trustee for a number of years. He has also been town clerk for ten years, and Superintendent of the Poor three years, and now holds the office of Notary Public. The Hilsons have always been identified with the interests of the town, and are esteemed by all who know them.

"Well has it been said by a poetic philosopher of our own day, Dr. J. G. Holland: -- 'God gives every bird its food, but he does not throw it into the nest. He does not unearth the good that the earth contains; but he puts it in our way, and gives us the means of getting it ourselves.'"

I think this quote equally refers to Jack. Jack was always working, whether as a farmer, merchant, a veteran of World War II or a conscientious citizen of his community. Jack did not let a stroke slow him down very much. He found the means to keep working. I used to see him tooling around town using a large three wheeled bicycle to run errands at the post office and store. And he continued to mow the front lawn of the church. He had the old Scottish toughness of his ancestors. They would have been proud of him.
Posted by Bovina Historian at 5:51 AM No comments: