On September 6 from 10 til 5, Bovina Farm Day will take place up Crescent Valley at Sunflower Farm. Their website is http://sunflowerfarmofbovina.com/index.html. I have been asked to set up a display about farming in Bovina (one more thing on my plate) and hope to set up a scanner and computer and scan pictures people bring of Bovina farms. A great opportunity to celebrate what made Bovina Bovina.

I'll be doing some further entries on Bovina farms on this blog during the next couple of months, so stay tuned.
Posted by Bovina Historian at 8:14 PM 3 comments:

This weekend's almost non-stop rain once again made me think of weather in Bovina's history. During World War I, Bovina had at least two significant weather events.

In late October, the November 2, 1917 issue of the Delaware Express, reported "Pink Street Stream on Rampage - Drives out the Robsons." The article went on to report that "In and about Bovina Center the flood was the worst in forty years...and the Pink Street steam and Coulter Brook did considerable damage, especially the former.

"Harry Robson, who lives in W.A. Hoy's tenant house near the bridge by the Strangeway store, noticed about 4 A.M. that the water was lapping up to the windows of his abode and alarmed his neighbors who rang the firebell and came to the rescue with a milk wagon. The family thus made their exit by the way of the back door, but the water did not invade their home as was feared, and the furniture was not damaged.

"The foot bridge at the Strangeway store was washed away; Tracy Sherman's wood pile was moved out into the state road. Gideon Miller's blacksmith was flooded, many cellars were full of water, roads were badly washed and fences all along the Pink Street stream were destroyed..."

The following summer, Bovina had a record hail storm. The Delaware Express reported in its July 26 issue that on "Friday evening, July 19, at the end of a perfect day of haymaking Bovina, but especially Bovina Center, suffered one of the most furious hailstorms that she has ever had."

The Express went on to report that "Mountain clouds, as black as coal, drove haymakers scurrying into their barns. These clouds had a special grudge at the folks in the Center and poured upon them a most punishing fusilade of hailstones as big as hickory nuts. The ground was covered white with hail several inches deep, making the earth look covered with snow. Some piles of hail that had run off the roofs of the houses were eighteen inches deep. The hail was gathered up by the shovelfulls by the villgers and used for ice cream. The Red Cross members gathered large quantities and made ice cream for their festival on Saturday night. But on the other hand the hail did much damage to the gardens. It riddled everything. It cut up the corn especially, and made most of the gardens look like 'no man's land.'"

This weekend's (and this month's) rain certainly made the haying a challenge - and the lawns lush. But no major flooding, fortunately.
Posted by Bovina Historian at 9:23 PM No comments:

While researching in the 1889 Delaware Republican Newspaper, I found this item in the August 31, issue: "The Farmers' picnic at Bovina on Wednesday of this week was well attended a most enjoyable time was had. Addresses were made by Rev. Dr. Moore, of Margaretville, and Mr. A.B. Gilchrist, of Meredith, and the Delhi Cornet Band furnished enlivening music."

My first evidence of a Bovina town picnic in the 19th century. And I expect it won't be the last....

The Bovina Town-wide Lawn Sale/Parade/Picnic for 2009 will be July 18. Hope you all can come!
Posted by Bovina Historian at 10:39 PM No comments:

Last Saturday (June 6) I attended a meeting at the Bovina Community Hall to discuss the future of Russell's Store. The Bovina Historical Society has received a planning grant through the MARK Project Inc. MARK is a not-for-profit, tax-exempt rural development company that unites efforts and secures resources to build and revitalize communities in and around the Margaretville area.

The Bovina Historical Society became the owners of Russell's Store in 2000 after the death of Marjorie Russell. It has been a challenge to maintain the store but many people in Bovina agree that the it is an important component of life in the town. After a brief hiatus, the store is open again under the proprietorship of Bea Sonhi.

One of the main attractions of the store is its long history. There has been a store on the spot almost since the founding of Bovina. In the 19th centur 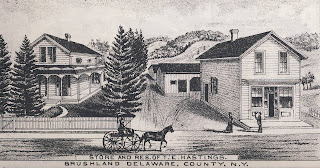 y, the first owner was James Cowan, who purchased the property in 1823. He sold it in 1846 to Robert Murray. Ten years later, T.E. Hastings became the proprietor (the picture above dates from about 1880, when Hastings owned the store). Mr. Hastings had the store until 1893 when Andrew Doig purchased it. On New Year's Day, 1919, Cecil Russell became owner and proprietor. The store would stay in the Russell family for 81 years until the death of Cecil's daughter Marjorie.

Cecil ran the store alongside his wife, Isabel and later his daughter. The Russells kept the store open six days a week, only closing on Sunday and on a few holidays a year. During most of the time the Russells had the store, dairy farmers were their main customer base. Cecil allowed farmers to buy their groceries on credit. Farmers paid up once a month when they got their monthly milk check.

The main labor for Russells came from the family, but they hired after school and summer help too. I was one of those privileged to work at Russells. Starting in 1968, I worked there off and on for a decade, working after school, a couple of summers in college and for several months after I graduated college. I started by 'putting away the freight' once or twice a week. This was essentially hauling upstairs to storage boxes of canned goods so they would be where they wouldn't freeze. I didn't exactly love hauling all that stuff up the stairs, but I imagine it was good exercise. I do recall very fondly the arrival of the brown sugar. Russells sold it in bulk, weighing it out in paper bags as requested. It would come in a 50 pound sack that Cecil would open then have me dump into a large barrel in the back room. Every time I finished dumping the bag, Cecil would ask 'Have a sample?' I always accepted the offer!

One of the interesting activities that I got to do two or three times was the annual inventory. Cecil kept everything, so I found myself inventorying shoes, hats and tools that had to date from when he first opened the store. I was particularly attracted to a couple of the old style hats and bought three of them. And he charged the original price on the hats, something like $2. People used to say that you could find anything at Russells. I can attest to that.

Marjorie kept on running the store after the death of her father in 1982 and her mother in 1985. Ill health forced her to quit working in the store in 1997 and she died the first day of the new century on January 1, 2000.

Marjorie bequeathed the store to the Bovina Historical Society so that one of Bovina's oldest places of business would be around for future generations. The society could have decided to make it a static museum, but instead determined to keep the store open as an active place of business. Doing so increases its value and should help ensure that it stays around as a store for many years to come. So when you're in Bovina, be sure to stop by, wish Bea good luck and make your purchases. You'll be glad you did.
Posted by Bovina Historian at 10:33 AM 1 comment:

I'm working on the next and probably last step for now in using Web 2.0 to promote Bovina's history - I've created a group in Yahoo so I can keep people apprised via mass e-mails when I update the blog or the Bovina NY History page on Flickr. In the next day or so, you may get a message from Yahoo asking if you want to accept my invitation. Feel free to ignore or decline the invitation. I will not use it to clutter your mailboxes - it's simply a way to alert you to updates on the Bovina history blog and Flickr page. And if you don't get a message from me and wish to receive these alerts, please let me know at rlafever[@]nycap.rr.com [Note: I've put the brackets around the @ in my e-mail to help prevent spammers from harvesting it, so you'll need to remove them before sending me a message.]
Posted by Bovina Historian at 9:53 PM No comments:

Finally, a bit late, but as I promised, I've started uploading images from my historian files onto Flickr in a group called Bovina (NY) History. The link is at http://www.flickr.com/groups/1109140@N20/. I've started with images of Bovina's one-room schools and some of their classes. Bear with me as I get used to all of this. You should have no problem seeing the pictures and I'm hoping you can add any comments. Let me know at my e-mail if you are having problems getting to the pictures or adding comments: rlafever[@]nycap.rr.com

Enjoy the pictures.
Posted by Bovina Historian at 9:10 PM 5 comments: