Bovina's "little school" held its last class 50 years ago this month.  The trustees of district number four, the last common school district in Bovina to operate a school, had made a decision at their May 2, 1961 meeting, to start sending all of their students to central school districts in Delhi, Andes or South Kortright after the 1960/61 school year.  That district, and a few others in Bovina, continued to contract to send their students to other schools.  In June 1967, all of the remaining Bovina school districts were dissolved by order of the State Education Department (as were all common school districts in the state that no longer operated schools).  Trustees of district number four sold their building to the town of Bovina in June 1967, just before the district was dissolved.  The town, in turn, and sold it to the Bovina Library Association in 1969.  It continues to serve as the town library.

On Saturday, July 9, at 11 am, I will unveil an exhibit about Bovina schools at the Bovina library, where the town's last school room was located.  I'm hoping some of the children from that last class will come and share their memories of the 'little school' and Mrs. Jardine.  [NOTE:  This is a change of date - we had scheduled for June 25, but it's graduation day in area schools and didn't want to conflict with that.]

Here are pictures from the June 2, 1961 issue of the Walton Reporter.  My thanks to Terry Rogers at the Walton Historical Society for making this copy for me.  It is much appreciated. 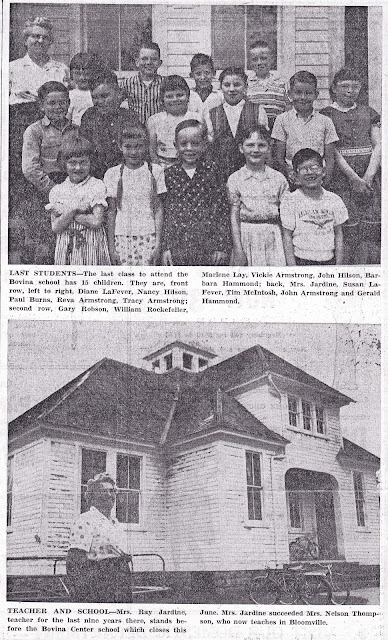