The compilation of the daily postings on the Town of Bovina Historian Facebook page:
139 years ago today, on May 1, 1882, 13-year-old Jane Isabell Boggs died. She was the daughter of Thomas R. Boggs and Jane Archibald.
Sixty-three years ago today, the May 2, 1958 Daily Star carried an article about one of the last one-room schools in Bovina, the Maynard School. Go to the Bovina NY History Blog at https://bovinanyhistory.blogspot.com/2016/06/scholars-in-century-old-schoolhouse.html to see the article.
134 years ago today, the May 3, 1887 Stamford Mirror in its Bovina column had this item: "Alex Hilson has bought D.C. [Champ] Worden's farm of 55 acres, at $2800 [This is the former Hilson farm by the Bovina creamery]. D.C. Worden has bought Ira J. Worden's place, containing 34 acres at $1900 [This was somewhere on Pink Street]. Ira has rented Mrs. Ellen Boyd's house and lot in Bovina Centre and proposes to run a livery business." Ellen’s house was located about where Tom and Betty Hilson’s house is located. The original house burned in 1916. Ira Worden was the father of Champ Worden. Ellen was Champ's sister-in-law.
Sixty-eight years ago today, on May 4, 1953, the Bovina Library reported on a number of books given to its collection. This is the report as published in the Catskill Mountain News on May 15. 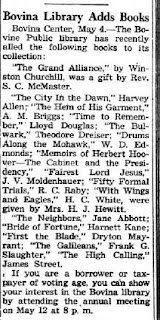 Sixty-six years ago today, the Bovina column in the May 5, 1955 Stamford Mirror-Recorder included this item: "Marshall Thomson resigned his position in the Bovina Creamery on May 1. Marvin Archibald is now employed in the creamery here."
135 years ago today, the May 6, 1886 issue of the Andes Recorder in its Bovina column reported that "Thomas H. Johnson has added to his extensive machinery a new loom of an improved pattern, which is probably the best one in the county.  He and his sons are capable of doing a large amount of work with the machinery at their command. They not only make all kinds of woolen cloth, but grind feed, saw lumber, etc." This would have been for Johnson's Woolen Mill, which was located near the Mountain Brook area.
108 years ago today, the May 7, 1913 Delaware Gazette had this item concerning a possible railroad coming to Bovina yet again: "The recent visit to Andes of R. B. Williams and Jos. Jermyn of Scranton, has made people in that vicinity wonder if Jermyn & Williams are still interested in the extension of the Andes branch [of the railroad] to Bovina and possibly to Delhi. Surveyor Howland informed us a few years ago that when the branch was built it was the intention of the company to extend it to Bovina, and that was why the road went into Andes village at such a high grade, in order to strike the road bed of the defunct Andes & Delhi R. R."
Ninety-five years ago today, on May 8, 1926, the town clerk certified that a resolution was adopted authorizing the issuance of a Certificate of Indebtness to allow for the purchase of a stone raking machine. 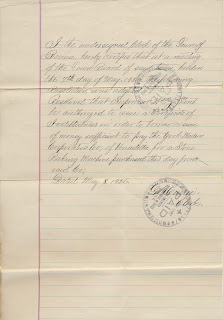 119 years ago today, the Bovina column in the May 9, 1902 Andes Recorder reported that "Three butcher carts now come round with meat – Perry Shaw, of Bloomville, William McDivitt, of Andes, and Ward Coulter, of this place."
Twenty-six years ago today, the Bovina column of the May 10, 1995 Walton Reporter included this: "Plan to attend the Bovina Emergency Squad open house to celebrate 20 years of service to the community at the fire hall on May 21, from 2-4 pm. Cake and punch will be served. There will be exhibits of current equipment and information on plans for the future."
141 years ago today, the Stamford Mirror's Bovina column for May 11, 1880 reported that "Mrs. David Miller Sr., is seriously ill." This was the former Isabella Turnbull, the second wife of David Miller (1795-1883). She survived this illness, dying in May 1883.
Eighty-one years ago today, on May 12, 1940, as later reported in the Delaware Republican's Bovina column reported that "Mr. and Mrs. Sylvan LaFever of Florida were here and attended Church." This likely was Sylvan's last visit to Bovina for a month later on June 10, he died in Patterson, New Jersey. Sylvan was my great grandfather.
Seventy-eight years ago today, the May 13, 1943, the Bovina column of the Delaware Republican carried this item: "Mr. and Mrs. Edwin Ormiston and sons John and Mark were with his mother and brother and sisters Marjorie, Lois Davidson and Ruth Monroe and their families on Mother's Day."
132 years ago today, the May 14, 1889 Stamford Mirror reported in its Bovina column that "The family of John W. Bramley has been quarantined the past week, but Mr. B. thought this was 'free America,' and went to Delhi regardless of the Board of Health. There is some talk of enforcing the law."
145 years ago today, on May 15, 1876, Isaac Atkin died. His death was later reported in the Delaware Gazette under the title "Sudden Death in Bovina." The paper noted that "Atkins, after working on his farm…until near night, started to go for the cows, and was shortly after found by his son, dead in the road." Isaac was a lifelong resident of Bovina.
Fifty-six years ago today, on May 16, 1965, Lib Blair passed away. Born Elizabeth Jannette Miller in 1867, she was the daughter of John Thomas Miller and Nancy Armstrong. She was two years old when her mother died. A year later, her father remarried to Eleanor Thompson. Lib married John W. Blair in 1889 - he died in 1945. She had two children, son Millard and daughter Helen. Lib was 97 when she died. Her daughter Helen would exceed her mother's age by a decade, dying at 107 in 1997.
131 years ago today, the Bovina column of the May 17, 1890 Delaware Republican reported that "Our milliners have returned from the city with a large stock of head-gear, and now they are busy day and night rigging out the ladies with that mysterious ornament which adorns their top-knots. If a woman's bonnet is not a thing of beauty, it is a mysterious thing."
Sixty years ago today, the May 18, 1961 Bovina column in the Delaware Republican Express included this item: "At the local contest for beauty queen at Dairyland Festival, there were eight contestants. The winner was Reneta Rabeler, daughter of Mr. and Mrs. Alex Rabeler jr. She is a student of South Kortright Central School."
Seventy-one years ago today, the Catskill Mountain News for May 19, 1950 had a front page article about the welcome given to the new pastor of the Bovina U.P. Church, Stanley McMaster and his family, under the title "New Pastor Presented With Pantry Shelves Full of Food." The article went on to describe the program presented in the church basement: "Program numbers included several Negro spirituals sung by pupils of the school directed Mrs. Frank McPherson, a piano solo by Miss Norma Burns, an instrumental number by Richard Roberts and James Hoy, a reading by Ronald Walley. The Hillbillies, Norris Boggs, William Davis, John Sulzer and Ernest Segar, played and sang. Rev. Charles McClung of Oneonta gave a welcome from Delaware Presbytery. The double quartet, accompanied by Mrs. Richard Crosley on the piano, sang two numbers. "The room was decorated with bouquets of daffodils and at one end were pantry shelves filled to overflowing with cans of fruit, vegetables and many other articles for the parsonage pantry. A clever presentation speech with the Mother Hubbard theme was given by Mrs. Eugene Vandenbord. Rev. McMaster responded by expressing their appreciation for the gifts and for all that had been done to make their arrival here a pleasant one."
136 years ago today, the May 20, 1885 Delaware Gazette carried this notice for the construction of a new school house at Lake Delaware.

Ten years ago today, on May 21, 2011, Marge and Cliff Burgin celebrated their 50th Wedding Anniversary at the Bovina Community Hall. 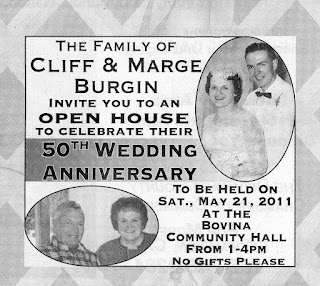 125 years ago today, the Bovina column in the May 22, 1896 Andes Recorder reported that "Slight showers have brightened up vegetation this week, but much more rain is still needed."
Sixty-eight years ago today, the May 23, 1953 Stamford Mirror-Recorder had several items in its Bovina column. Headlined "Vacation Trip has Mishap for Jane Hilson," the column went on to report that "Jane Hilson broke her arm while on a vacation trip through the southern states." The column also included two items about Floyd Aitkens: "Mr. and Mrs. Floyd Aitkens and sons, Billy and Alan, were in Binghamton on Monday for a check-up on Billy's arm." The column later reported that "Floyd Aitkens attended the New York State Bowling Tournament at Rochester on Saturday."
Eighty-six years ago today, the May 24, 1935 Delaware Express reported that "Dr. Whitcomb Dies in Egypt." The articled noted that "Dr. Norris B. Whitcomb, 47, a beloved physician who was formerly located in Bovina Center and for the past sixteen years a medical missionary at Assuit, Egypt, died last week, death, according to report being due to blood poisoning." He was survived by his mother, sister, wife and two children.
Eighty-two years ago today, the May 25, 1939 issue of the Delaware Republican published this photograph by R.R. DeGelleke of Jack Hilson in his High School shop class. 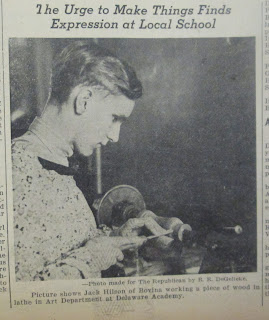