The Burns' Farm in Pictures

Back in the early 1990s, Agnes Burns donated a set of glass plate negatives to the Delaware County Historical Association. The images likely were taken by her grandfather, Alexander Burns or her grandmother, Nancy Miller Burns. It's possible her father, John also took these. None of the images are dated, but a couple of clues point to the first decade of the 20th century.

Most of the images were taken on the Burns family farm at the end of Crescent Valley Road and now the home of Mike and Heidi Gogins. Alex was the third generation Burns to have the farm. His grandfather, Moses Burns, was the first settler on the farm, coming at the start of the 19th century. Moses died young. He was 31 when he killed while helping to build a house in Bovina. The farm went to his son John, who, unlike his father, lived to a ripe old age, dying in 1896 at the age of 89.

Some of these images have been shared before in other venues. One of the best known is this shot of Alex and Nancy's daughter, Aggie, feeding various fowl: 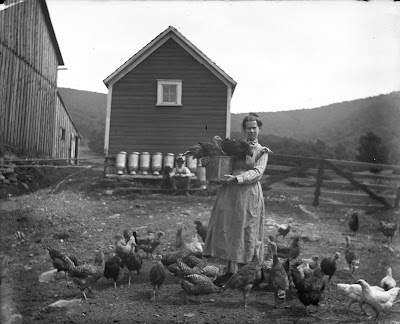 I've also likely shared before images of my grandfather, Benson LaFever, and his brother Clarence on their grandfather's farm. They spent time with Alex and Nancy in 1908/09 after the death of their mother, Ella Burns LaFever. 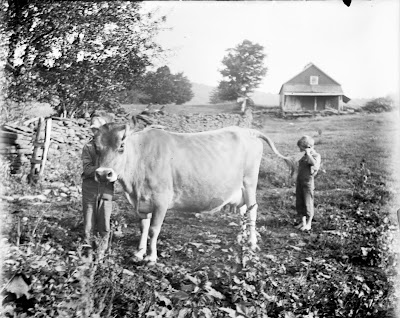 The collection includes several interesting farming images, including a steam tractor.
The Burns continued to use more traditional methods however, including this horse drawn reaper. That's Alex to the left and his son John sitting on the reaper.
The images included some scenic shots of the farm and Crescent Valley. 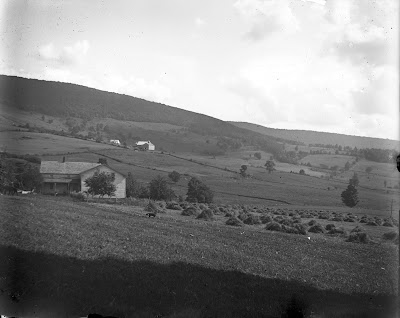