Today we'll be dedicating a historic marker at the Maynard School on Bovina Road. So it seems to be a good time to share this news article from the May 2, 1958 Oneonta Star. Thanks to Amy Bathen, daughter-in-law of the late Artie Bathen, for sharing this clip. The upper photo shows the building and if you look closely, teacher Ed Schneider is in the doorway. The lower picture shows the students in the classroom with their teacher. In case you have problems reading the caption, I've transcribed it here:

"Scholars in the more than century old one-room schoolhouse in District One, Town of Bovina, better known as the Maynard District, located five miles north of the Village of Bovina. It is reported to be one of the very limited number of one-room schoolhouses in the State. Front row: (L-R) George Easley, Linnell Trimbell, Byron Trimbell (he was listed in the article as Myron!), Karl Waterman, Clare Easley; second row; (L-R) Edward Schneider, teacher; Dawn Hobbie, James Bathen, Artie (Spike) Bathen, John Tinyes. Not present is Dorothy Bolduc. (Star Staff Photos by Harper). 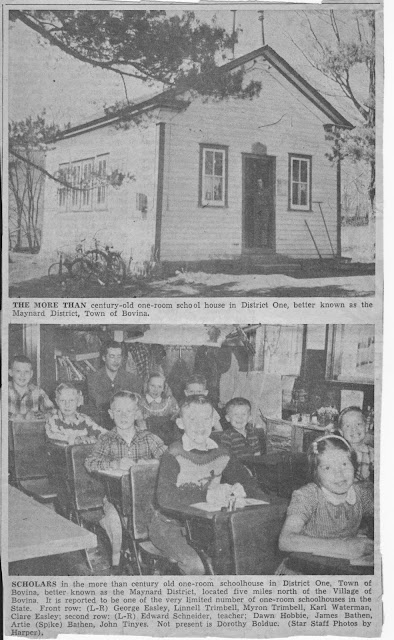 The school closed a bit over a year after this picture was taken in June 1959. Amazingly, Ed Schneider still is with us at the age of 102, living in a nursing home in Oneonta.
Posted by Bovina Historian at 8:00 AM