This Day in Bovina for February 2021 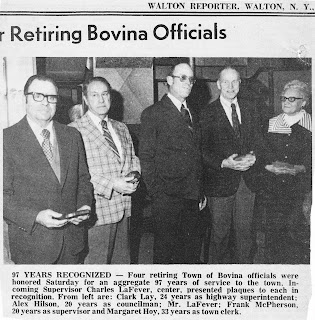 100 years ago today, the February 2, 1921 issue of the Delaware Republican carried this item: “The blacksmith shop owned by Mrs. Logan, in Bovina Center, was destroyed by fire on Wednesday morning about 1 o'clock. Loss about $500, besides about $300 on stock owned by the lessee. There was a hot but successful contest by the bucket brigade to save Mrs. L's barn, which stood within a dozen feet of the burned shop. Several persons had their faces severely scorched. The place is fortunate in having its buildings generally separated, as in case of fire its facilities, except buckets and running streams, are very limited. But they always seem to use the means at hand with promptitude, judgment and resolution. The insurance on the shop, we learn, had recently expired; but the liberal people of the town have already subscribed over $300 to assist in rebuilding the property.”

Seventy-seven years ago today, the Bovina column in the February 3, 1944 Delaware Republican-Express reported that "Mr. and Mrs. John W. Blair observed their fifty-fifth wedding anniversary last Sabbath. They are both in good health and able to be about. Their daughter, Mrs. Marshall Thomson, is with them at present." John would die in August of the following year. His wife, the former Lib Miller, would survive him by almost 20 years, dying in May 1965 at the age of 98.

Thirty-five years ago today, the Bovina column of the February 4, 1986 Delaware County Times carried this item: 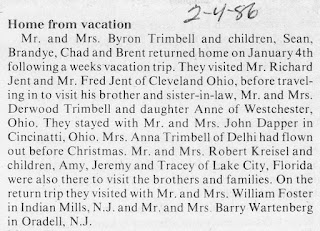 137 years ago today, the Bovina column of the February 5, 1884 Stamford Mirror carried this item: "The pupils of the Brushland district school, are preparing for an exhibition to be given at the close of the winter term."

Seventy-nine years ago today, on February 6, 1942, Jennette Ellen Hoy Archibald died. Born in 1859, she was the daughter of John R. and Isabella [Miller] Hoy. She also was the sister of David F. Hoy. She lived most of her life in Bovina. In 1915, she married a widower, Sloan Archibald. She was in turn widowed at his death in 1928.

125 years ago today, on February 7, 1896, Alexander Storie died at his home in Bovina at the age of 83. The Delaware Republican noted that "he was one of the staunch, judicious and reliable men of [Bovina], for a number of years its supervisor, whose judgment was seldom at fault and who always had the courage of his convictions and the nerve to carry them into effect, if possible. A venerable land mark and pioneer, warm friend and excellent and thrifty citizen is removed by his decease." This is his portrait from Munsell's History of Delaware County. 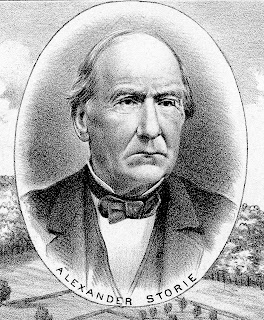 Sixty-nine years ago today, the February 8, 1951 Catskill Mountain News reported in its Bovina column noted that "Howard Currie of Delhi has commenced a job on our church. He will do a good bit of remodeling, add cloak and rest rooms and change the doors leading into the auditorium. There will be other changes." The same column reported the arrival from Italy of Mrs. Frances Bomanico, the "sister of John Bellino," who was visiting her brother and trying to learn English. It was noted that "She finds it difficult."

162 years ago today, on February 9, 1859, this document was filed with the town clerk from the town's commissioners of highway petitioning voters in the town to raise an additional $750 in highway monies to cover the cost of creating a new road "from Bovina to the Town line leading to New Kingston." 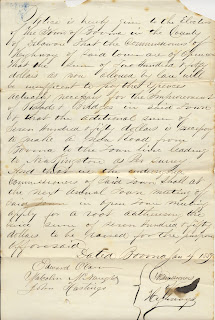 141 years ago today, the February 10, 1880 Bovina column in the Stamford Mirror, reported that "After an illness of about fourteen weeks, Mrs. McDonald, widow of the late Henry McDonald, died at her residence near Brushland, on the morning of [February 3], aged 83." Born in Scotland in 1797, the former Margaret Donald married Henry before coming to the US in the 1830s. Henry had died about five weeks earlier. She had six children, who survived her. She is buried in the Bovina cemetery. The house in which she died is now my house.

142 years ago today, the Stamford Mirror in its February 11, 1879 issue, reported under the headline "Fire in Bovina" that "The house of Mr. Charles H. Bramley in Bovina was burned on Tuesday night last week. The family were away making an evening visit and arrived just in time to see the house fall in ruins. No insurance. Mr. Bramley and family will have the sympathy and pecuniary assistance of his townsmen and many friends." This Charles likely was the son of Henry Bramley and  had a farm on Bramley Mountain. Because of the fire, Bramley sold his herd of 21 cows and other animals, as well as farming implements on February 28.

132 years ago, on February 12, 1889, the Stamford Mirror reported that "Bovina people want a new U.P. church, just like the one recently dedicated at South Kortright. They are going to solicit about $3,500 and fix up the old church with new-fashioned notions. Let them go ahead." The renovations were carried out in the church that fall, making it look very much like it does today.

136 years ago today, on February 13, 1885, this bill was submitted by T.F. McIntosh of the Delaware Republican for printing 200 quarantine notices for the Town of Bovina. The notices were for the diphtheria epidemic that hit Bovina Center in late 1884 and early 1885. More about the 1884/85 diphtheria outbreak in Bovina is at https://bovinanyhistory.blogspot.com/2015/02/business-in-brushland-has-been-at.html 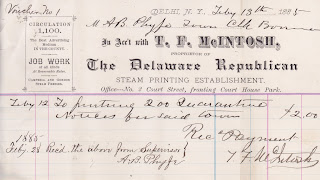 138 years ago today, the February 14, 1883 Delaware Gazette reported that: "Rev. J.B. Lee, of Bovina, has received a $100 check from Hon. E.T. Gerry, to be used for the benefit of the 'Young People's Christian Association.' On a former occasion Mr. Gerry presented the Association with $50 worth of books for their library."

Seventy years ago today, the Bovina column of the February 15, 1951 issue of the Delaware Republican-Express included the following: "The Bovina Home Bureau unit is holding a 'Winter Fair' Feb. 2 in the Bovina Community Hall at 8 pm. There will be a fish pond, snack bar, sweet shop and fancy work shop, as well as a variety of games. Come and visit with your neighbors and have an evening of fun. There is no admission charge; save your money until you get inside."

135 years ago today, the February 16, 1886 issue of the Stamford Mirror in its Bovina column reported that "The household goods of John Shanks, wagon maker, late of New Kingston, arrived in Brushland on Thursday, the 11th inst., and he will occupy the rooms, and carry on the business, in the shop lately occupied by J. Dietrich."

110 years ago today, the Bovina column of the Andes Recorder reported in its February 17, 1911 issue that "C.J. Marks, who for two years has been the buttermaker at the Center creamery and was hired for this year, has thrown up the job and hired to make the butter at the up-town creamery. He will move to the house near the creamery."

Eighty years ago today, on February 18, 1941, as later reported in the Delaware Express, "Mrs. William J. Archibald and Miss Emily Archibald received medical advice in New York….They and Henry Monroe made the trip with the Rev. Harvey H. McClellan. Mr. Monroe visited an uncle in the Bronx."

Ninety-one years ago today, the Bovina column of the February 19, 1930 Delaware Republican reported that "Lancelot Thompson was taken ill last Wednesday night and Dr. Sarle was with him for three hours. He is better at this time." Thomson survived this 'attack' but died a few months later in June at the age of 81.

131 years ago today, the February 20, 1890 issue of the Hobart Independent reported the following: "Bovina farmers have hired help for the coming season at $25 per month for men and $4 a week for girls, in some cases. Bovina farmers can stand this if anybody can, but the price is quite out of proportion to the price of farm products."

185 years ago today, on February 21, 1836, Elizabeth Jane Fuller was born in Bovina, the first born child of Richard and Ann Fuller. She died at the age of 21 in 1857 and is buried in the Nichols cemetery on Cape Horn Road.

134 years ago today, the Bovina column in the February 22, 1887 Stamford Mirror reported that "The R.P. Church is being re-kalsomined [whitewashed] and repaired. A social for the benefit for the church was held at the house of David J. Miller, on the night of the 16th, and about $18 was raised." This church stood about where the Bovina fire hall and the playground are located. It was taken down in 1943.

Twenty-seven years ago today, the Bovina column of the February 23, 1994 Walton Reporter reported that "The Bovina Library is sponsoring a craft and hobby night on Feb. 23 from 7:30-9 pm at the library. The program will be displays and demonstrations of crafts and hobbies. Janet Stewart will provide musical entertainment. Refreshments will be served. Call Hugh Lee if you have crafts or hobbies you wish to share."

171 years ago today, on February 24, 1850, Matilda Loughran Phyfe died at the age of 23. She was the daughter of Alexander Loughran and Sara Maria Card. She married John Phyfe in Roxbury in May 1847. She likely died in childbirth, giving birth to her daughter Sarah. John would marry twice more, and was widowed each time, dying in 1901.

Sixty-one years ago today, on February 25, 1960, the Bovina column of the Delaware Republican-Express reported that "The LaFever Brothers have tapped their sugar maples, ready for the first sap run."

106 years ago today, the February 26, 1915 issue of the Catskill Mountain News carried an article under the headline "Stops Slander Suit." "The slander suit, in which $25,000 damages were asked of Rev. James B. Lee, pastor of St. Paul's Presbyterian church in Philadelphia, by Charles W. Wilkins, has been withdrawn, the plaintiff having reached the conclusion that he could not sustain his case. This suit is of local interest from the fact that Mr. Lee was born in Bovina and spent his boyhood there. He is a son of the late Rev. Dr. J. B. Lee, who was for many years pastor of the Bovina Centre United Presbyterian church. The plaintiff in this action, Mr. Wilkins, who was an elder and also treasurer of St. Paul's church, was charged by the pastor with having misappropriated church money, and then having embezzled money belonging to a trust fund." Rev. Lee's father, J.B. Lee, was involved in a slander suit back in 1870. More about this suit may be found in the Bovina NY History Blog from March 2013: https://bovinanyhistory.blogspot.com/2013/03/kennedy-vs-lee-part-i-libel-of-slander.html

127 years ago today, on February 27, 1894, Shirley Ada Miller was born, the daughter of John and Bertha Miller. She grew up on Pink Street on the family farm (the farm that later became Suits-Us Farm). She later became a dental hygienist and passed away in 1973 in Walton.