Some New Old Pictures of Bovina

I've been reviewing some recently acquired images and want to share some of them with you.

Tom Davidson recently sent me an envelop of pictures from his late father, Ed Davidson. Included were two images of Bovina Center that I have not seen before. Unfortunately, they are not dated, but likely come from the early 20th century.

Two more interesting pictures hail from Lake Delaware. The Delaware County Historical Association, where I'm the archivist, has a collection of glass plate negatives taken by Edna Georgia Benedict of East Meredith in the early 20th century. It was a bit of a surprise to find two images of the construction of Aknusti, the home built by Robert Gerry. The photos are dated 1913. 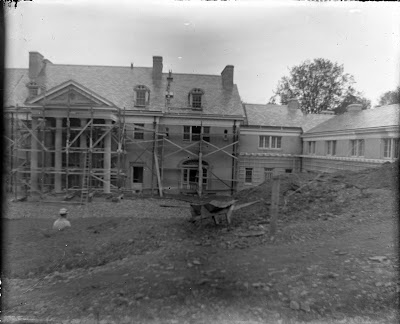 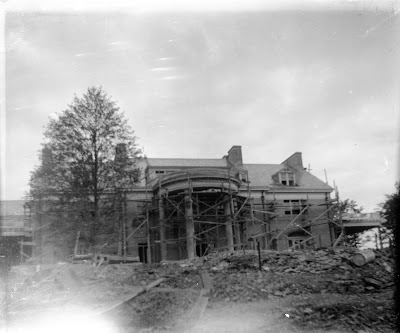 The house was a summer home for Robert and his family until February 1953 when a fire badly damaged it. Here are two postcard views of the house in its heyday. 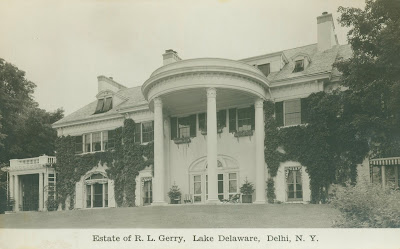 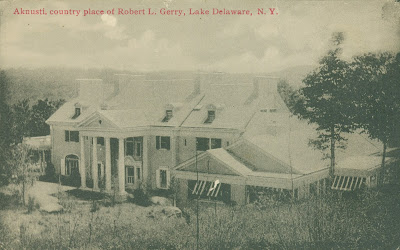 The final image I recently uncovered came from images from the Monroe Family. Henry Monroe's sister was Martena Monroe Kellam. Her daughter gave images to former County Historian Pat Grimes. The current county historian turned them over to me. This image was labeled on the back "Raising barn upper Coulter Brook, Bovina NY....Next to my grandfather Coulter's farm." I figured out that this barn likely was built by Charles Tuttle in May 1894. The farm went through several owners, including William Doig, Fernando Hunt, Frank Eraczek, Walfred (Wally) Hansen, James Henderson and Eric Saubart. The barn is now gone but I think it was still standing in the 1980s.