The Burns and the Boggs' Celebrate their Golden Wedding Anniversaries (1921)

100 years ago this month, in February 1921, two Bovina couples celebrated their Golden Wedding Anniversaries one day apart. On February 15, Alex and Nancy (Miller) Burns celebrated at their home (now the home of Michael and Heidi Goggins on Crescent Valley Road) with about 100 attending to enjoy a dinner and music. The couple received a number of gifts, including a gold watch to the bride and several gold coins. The next day, William and Alice Boggs planned a quiet family party that turned into a party of 125, including Alex and Nancy, fresh from their celebration the day before. Also attending were William’s brother Thomas and his wife, the former Jane Archibald, who were married 55 years and Gib and Mary Jane (Banker) Miller, married 52 years. 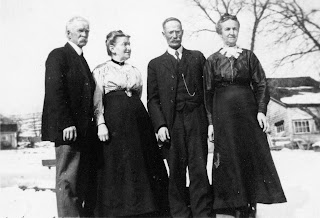 An article appeared in an unidentified magazine (likely a publication from the Presbyterian Church) about these two couples and others in Bovina who had been married over 50 years.

Alex and Nancy had four children, three of whom grew to adulthood. Agnes Bell Burns, born in 1872, was married to Dave Draffen. Widowed in 1942, she died in 1964, the last of Alex and Nancy’s children (and the eldest). Their daughter Ella (Ellen Miller Burns), born in 1874, was married to Sylvan LaFever in 1897. She had two sons and a daughter (who died at the age of 2) before she died from a miscarriage or stillbirth in 1908. Ella is the ancestor of the LaFevers in Bovina. Alex and Nancy had a son, John Sinclair Burns in 1888. He was married in 1913 to Elizabeth Jane Carnright. They had two daughters, Mary and Agnes.

William and Alice Boggs would celebrate two more anniversaries before Alice’s death in June 1923. William died just over 10 years later in 1933. Alex and Nancy would go on to celebrate their 60th wedding anniversary in 1931. Nancy died three months later in May 1931. Alexander survived his wife by over eight years, dying in October 1939 at the age of 90.