This is a slightly revised version of the talk I gave on August 1, 2020 at the inaugural ball game at the new Creamery Field, created by the Livestock Foundation. Thank you to John ‘Chico’ Finn and Wendy Buerge for inviting me to say a few words. I’ve added a couple of items that I did not include in my talk in the interest of brevity.

So, a brief history of baseball. Does anyone still think it was invented by Abner Doubleday in 1839 in Cooperstown?

I hope not. This definitely is a legend. Baseball appears to have evolved since at least the mid-18th century. The earliest newspaper reference to baseball in the U.S. came 14 years before the reputed Doubleday date. In 1825, a newspaper reported a town issuing a challenge for a game of baseball. And the town is Hamden, NY. The Delaware Gazette posted the following: “The undersigned‚ all residents of the new town of Hamden‚ … challenge an equal number of persons of any town in the County of Delaware‚ to meet them at any time at the house of Edward B. Chace‚ in said town‚ to play the game of Bass-Ball‚ for the sum of one dollar each per game."

References to baseball in the area don’t start showing up with any regularity until the 1860s, but the earliest known reference that has been found to date comes from our county.

In August 1866, the Delaware gazette gave its impression of baseball:

As this is the popular game just now, we give below the directions for playing the game. They are very simple:

·         The game is a great invention. It is easily understood. All you have to do is to keep your eye on the ball.

·         One fellow takes a club and stands on a line, and another stands in front of him and fires a ball at him.

·         The first fellow drops the club as though he was scared and runs like a pickpocket with an M.I. after him.

·         Several fellows run after the ball; somebody catches it and fires it at somebody else, when the chap who had the club stops running.

·         Another fellow then takes the club and the same man who is called “pitcher,” pitches on him, first the ball at him, and he hits back, knocks the ball, drops his club, and cuts his stick for the first base.

·         It is quite an intelligent game, depending upon the use of your legs. The first principle of the game is running.

Apparently, there were some quarters that had concerns about baseball, though it seems it was a small minority. The Delaware gazette, in its November 07, 1866 issue reported this little item:

Immorality of Base Ball Playing — At the recent Sabbath School Convention one reverend delegate spoke strongly against the awful practice of playing ball. He saw nothing but ruin to young men who engaged in the practice. We hardly think he obtained the sympathy of half a-dozen delegates. Certain it is that this enemy of base ball was most completely snuffed out in the evening by Rev. Mr. Scoville, of Norwich, Chenango county. He not only defended the lovers of the game but declared himself one of its votaries. Speaking of playing, he said: “I regret that I cannot remain longer in the Convention, but our club and the Hill boys have a match game on the tapis, and I must go. We licked those Hill boys once, and thank the Lord, we can do it again.”

The earliest newspaper reference to a baseball team in Bovina comes from the May 29, 1872 Delaware Gazette: “It is reported among the boys that a match game of base ball will be played upon the Fair Grounds, in Delhi between a picked nine from Bovina and the River boys of Delhi.”

By the next month, Bovina had a club, the Highlander Base Ball Club. The papers reported at least two games, one involving a club from Delhi and another the Delaware Valley Base Ball Club from Bloomville. The latter was held in Bovina and was a high scoring tie game. 58 runs for each team. The article concluded “Owing to the late commencement of the game, the ninth inning was not out till the hour was so late it was deemed imprudent to play another to decide the game.”

In October 1885, the Delaware Gazette reported on a three-game series between Hamden and Bovina. The game at Hamden was won by the Hamden club, and the one at Lake Delaware by the Bovina club. During this second game a Hamden player had his finger put out of joint by a ball. The paper noted that “As they are quite evenly matched the [final] game will be watched with interest.” Unfortunately, not with enough interest to report the result.

Some games weren’t so authorized and were more impromptu. In October 1894 the Andes Recorder reported that “On a Sabbath not long ago a party from [Bovina] went up on the Indian rock to enjoy a game of ball. How the game succeeded we do not know, but such actions as this should be stopped immediately.”

The following year, Bovina’s team went to Delhi for an injury plagued game that the local paper called ‘exciting.’ The paper reported that Chan Squires and Leonard Thomson collided while running to catch a fly and were badly cut about the face.  Thomson’s cheek was cut so that the services of a physician was required to sew it up and while the doctor was at work dressing the wound John L. Gordon and Andrew Seacord both fainted.  Al Thomson fell on his arm and injured it so that he was disabled. And sadly, Bovina lost this match.

While the teams tended to be male, girls in the late 19th century played as teams in the local schools. In the fall of 1895, the school boys played against the school girls. And the girls won, 32 to 27.

Organized baseball in Bovina continued for about a decade or so into the 20th century, more and more tied to the schools. In 1903, a local paper reported that “The Hobart High School base ball team went to Bovina Saturday and crossed bats with the Bovina school team. The butter eaters won easily. The score was 15 to 11.”

In June 1913, Bovina went to Margaretville for a game and lost 13 to 7. The game was called in 8th to allow the Bovina team members to catch the train for home.

From about 1920 on, Bovina did not have any kind or organized team or club, though the game continued to be played at town picnics. The town picnic in 1918 included a game between single and married men, with Lester Hoy serving as captain of the single men and Harry Robinson for the married men. The married men showed their supremacy on the ball field, beating the single men 16 to 10.

In 1926, the town picnic included a ladies baseball game between the Bovina Center and Upper Bovina ladies, with the latter having the upper hand (no pun intended). 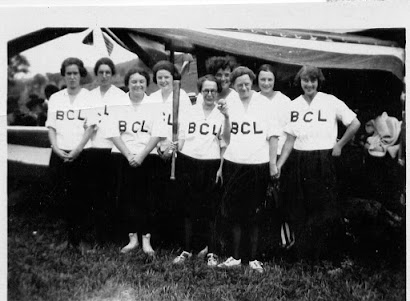 I could find no reports of baseball games in Bovina through much of the mid-20th century, though I’m sure impromptu games continued. On June 14, 1970, there was a community baseball game, held next to what is now the library. I know this date because this is the first entry ever in my diary of 50 years. I noted that “Our team won but I didn’t help with the victory.”

Accept for games like these played on occasion, Bovina had no official baseball team until 2009, when Harlo Bray organized the Bovina Dairymen. Their first game in Bovina came in July 2009.

This early entry from August 2009 reported on the Bovina Dairymen’s first game in Bovina, sharing pictures taken on Bovina Day that year: https://bovinanyhistory.blogspot.com/2009/08/bovina-day-pictures.html

I wrapped up my remarks by wishing the Dairymen a victorious day – and my wish came true.

And here are several entries from this blog that involve baseball:

In August 2010, I shared a newspaper account from the May 29, 1903 Catskill Mountain News about “An Interesting Game at Bovina Center.” https://bovinanyhistory.blogspot.com/2010/08/interesting-game-at-bovina-center.html

In 2011, Bea Sohni, the former proprietor of Russell’s, shared this photo with me of a Bovina Center player. We have yet to find anyone who recognizes him. Here’s hoping you will: https://bovinanyhistory.blogspot.com/2011/01/who-am-i.html

David Fletcher Hoy was a Bovina native who was the registrar at Cornell University. He also was an avid baseball fan – so much so that Cornell named a ball field for him. That field still exists today: https://bovinanyhistory.blogspot.com/2014/10/david-fletcher-hoy-give-my-regards-to.html