Grandma's First Husband - "Have reached my destination safely and am well."

In April came the last big change in James’ location. Around April 5, he set sail for France, arriving on April 15.

Anna received 36 letters from James while he was in France.  She tracked the arrival of all the letters, as well as his allotments and other items on this card. 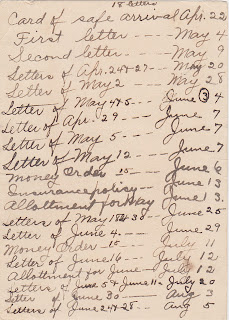 The first item she received from James was this simple card that simply stated “I have arrived safely overseas” along with his signature.  Anna received the card on April 22 (an identical card also was sent to his mother). 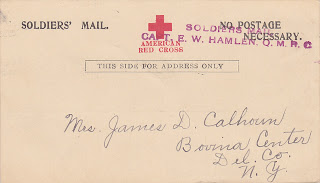 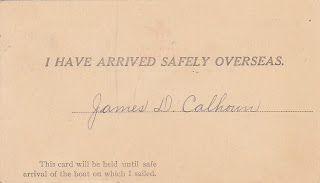 The letters James wrote from France came to Anna sporadically, and often not in sequence.  For instance, his letters of June 5 and 11 arrived 8 days after the letter of June 16.  On average they took about a month to arrive.  Anna’s letters to James seemed to have taken also about a month, though in his last letter, written September 23, he noted just receiving Anna’s four letters written between July 3 and 19.  Her later letters written in late July and early August were received by James in early September.

The main thing one will notice with the letters is that they don’t tell too much about what James is doing, particularly where he is located.  The letters do comment on things going on in Anna’s life, though the early letters don’t even do this. As James noted in his first letter, “I can learn better what to write after more experience.” All the letters have a statement and signature from the censor approving them for mailing.
No letters from Anna to James survive from his time in France.

The first letter he sent from France is not dated but was received May 4. 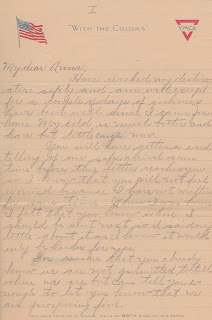 Have reached my destination safely and am well, except for a couple of days of sickness have been well since I came from home.  My cold is much better and have but little cough now.
You will have gotten a card telling of our safe arrival some time before this letter reaches you so I know that you will not feel worried because I have not written for some time.  When I was home I felt that you knew where I should be sent next so I said very little about it as I knew it would only be harder for you.
For reasons that you already know we are not permitted to tell where we are but can tell you enough to let you know that we are prospering fine.
The weather has been nice all the time of which I for one was very glad.  Every protection is given us and I must say we are well provided for and feel that every precaution is being taken for the preservation of the men although we no doubt will have to work hard here which is quite right under the circumstances.
I will not make my letters long as the censor may tire reading same and feel like discarding them but do not feel bad because I write little because I think of you often and perhaps I can learn better what to write after more experience.
Address my letters Co ‘D’, 7th Inf, A.E.F.
Your most loving husband,
James
PS - I await a letter from you very anxiously.  JDC.

Somewhere in France
My dear Anna;

You will think I have forgotten to write but such is not the case.  I have been moving and have not had an opportunity.
I know you will be very anxious to hear from me so I am writing at the first opportunity and think I shall be able to write more often since I am settled for the present.  I hope to get a letter from you soon which I anxiously await.  I am feeling very good now and do not tire easily.  My cough has nearly gone.
I have the privilege of having access to a YMCA which I appreciate very much.  This is a beautiful country indeed and it seems good to see vegetation so green.
I am not very wise yet as to material which I may write but will soon get a few ideas after a little more experience.
I am wondering what you people are doing these days but I can imagine how things are there.
I can readily see how different are the customs of the people here from at home.  I have little success speaking their language and consequently have not tried but little to talk to them.  Everything seems very different but expect I shall simply have to adjust myself to conditions.
I hope to hear from you before very long.  Please write often.
Your most loving husband,
James

The next two letters arrived the same day, May 20.

I will start another letter on its way.  I will try and send one every few days.
Everything is all O.K. and am getting along nicely.  Am feeling fine and feel that the steady work is doing me considerable benefit.  Am trying to get a good grip on my work but you know how hard I am to get into shape.  I have hopes however and feel that I shall get over my blunders in time.
The weather is damp and all forms of vegetation look fine.
The language seems very different from ours but know that ours appears just as strange to them.
The weather must be warmer with you now and expect the country there is just as beautiful as here.
I ate the last of the maple sugar this morning and of course wished there was more.


I am interested in my work and as I feel fine I know I shall feel fine.  I cannot afford to be discontented and neither can you.  I have a work to do before I come again.  I know you will understand.
Please write often.  Your most loving husband, James.

Wills send you a few lines today to let you know that all is [well].  I am also sending you a little surplus valuables that I had here.  I am anxiously awaiting a letter from you and expect to get one before very long.
I have written but few letters; have sent them to you and mother only.  I know that you will let Cora, Anna [his sisters] and the others know that I am O.K.  Tell the people to write me and try to let them know how I shall appreciate a few lines from them.
I expect you are finished with the maple syrup but there is not doubt many other pieces of farm work demanding attention.  I feel that it is good that I can keep busy enough to keep my thoughts from wandering too far away as they surely would otherwise.  Do not think that my thoughts do not come across to you because they do every day as I know yours do of me.
Please notice when the next premium is due on my insurance policies.  I believe there is a semi annual payment due on one Aug. 3 and a yearly payment due on the other October 3 or about that time.
Now that you know the situation please write as often as you conveniently can.
Your most loving husband, James

The last letter he wrote in April took over a month to get to Anna.  She didn’t get it until June 7.  Three later letters written in early May all came before this one.

I am writing you a few lines this evening to let you know that all is O.K. with me.  There are many things I should like to write to you about but since I am not permitted to do so will have to wait until I can talk to you personally.
I was at services yesterday and it certainly did seem good to hear the preacher voice again.  I expect I shall be able to get to services nearly each week.  We are fortunate enough to have an ordained minister with us at all times.
I expect the weather will be getting warmer with you now and you will soon be all busy getting the crops soon.  Am afraid I shall almost forget how to care for horses and cattle but am sure I could learn the art by brushing up a little.
When I get a letter from you I shall be able to write you better letters than at present.  Letter writing is much easier when the letter in question is in answer to one already received.  I could ask many questions but I know that is needless as you will write me a letter of general information.
Your most loving husband, James
F.S. Long [Censor]