Grandma's First Husband - "May God soon permit us to be together again..."

I’m doing a special entry following the story of my grandmother and her first husband, James Calhoun, who died in the First World War, one of two Bovina based fatalities during the war. At the beginning of March, James was at Camp Greene, North Carolina. On March 25 or 26, he was suddenly headed back north to Camp Merritt, New Jersey (though he knew the change of camp was coming).

This is the story of James' last ever trip home. After his arrival in camp, James was granted a 48-hour furlough, which started on Sunday, March 31 at noon. The timing was unfortunate. As he noted in a letter to his mother, “My pass took effect so late in the day that I could not get home by train that night.” James telegraphed Anna and asked her to meet him in Kingston at 5 pm. The telegram came just as she was getting ready for church. She dropped everything and her brother Ralph agreed to drive her to Kingston, arriving just after James’ train arrived at 5 pm. After supper in Kingston, they drove back to Bovina, arriving about 2:30 am on Monday.
James didn’t even get 24 hours at home, and he likely spent much of it in bed because he had a fever. By Monday afternoon, James and Anna were headed back to Kingston, so James could get a train to New York City before noon on Tuesday, April 2, the end of his furlough. Anna and James spent the night in Kingston before she returned on the Ulster and Delaware to Bloomville and James took the train back to New York and to camp. His fever had broken by the time of his return to camp. This brief furlough would be the last time Anna and James saw each other. 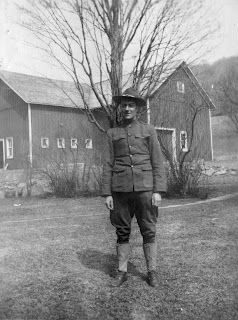 Shortly after his return to camp, both James and Anna were writing to Mrs. Calhoun with explanations and apologies. James’ brief stay did not allow him time to see his mother. Anna and James were both worried about how she would react and explained the unfortunate circumstances of his very short furlough.

James wrote to Anna the day of his return from furlough:

My dear Anna;
I reached camp safely about 11 A.M. and had a good trip. I hope and pray as I write this that you are safely back at Bloomville waiting for Edith and wish I was there too.
I do not feel so hoarse and some phlegm is loosening up today so I shall soon feel better. The boys are going to dinner but I do not feel hungry and the memory of the good things I had at home takes away all my appetite for army chow.
George Vottee(?) came down from Kingston to Dumont with me so I had company all the way. I wish you might have had someone to keep you cheered on your lonesome ride to Bloomville.
A number of those away on pass have not yet returned and a number of them have been away over the time granted them. A few others have returned the worse for drink.
This company goes on guard tonight but I am not on the list of which I am glad.…
I do hope you will stand my absence better than I fear you will. I realized so fully this time when we were together now much we really mean to each other. May God soon permit us to be together again as I feel he surely shall.…
Will say goodbye for today.  With the greatest love a man can have for his wife.
James
James wrote twice the next day. A brief card and later a longer letter. This letter would be his to his wife before he sailed for France:

I wrote you a note and mailed it hastily this P.M. as I might not get another chance to write you for a few day but I think I shall be able to write you one more good long letter this evening and will try and mail it before it is too late.
Three letters came from you tonight. Those of Mar 29-30 and the one of yesterday while you were on your way.  I was so glad to get them all and especially glad to hear that you had a good trip but I know a lonesome one to Bloomville. It was so nice that Aunt Mary and Uncle Will were there and that you could go to Oneonta with them. They would do so much to cheer you up.  I thank God that you have so many kind relatives and friends.
My heart is especially full tonight and I cannot help it and it is hard to keep back the tears but perhaps I shall feel better if I do not try but let them come freely. I feel so sorry for you because of all the sorrow I am causing you. I love you so and there is not or it seems there is not one thing that I can do for you. I thought I would have an opportunity to get my picture taken at a studio as you requested but I am most afraid I shall not be able to get from camp now to get that done.
There are so many things I wanted to talk to you about that I could not think of where I was with you and many of them have come to me since. I have one thing to be thankful for and that is that you have a good home when I know you are safe and our people are all so good. I did so little when I was home to show my gratitude to them, I always spoil things that way because I am so quite and stupid.  I want all of our people to realize how highly I appreciate how they have been so good to us in every way. You will try and make them understand, won’t you? I never can make them feel the gratitude that I owe them all.
I want to tell you or rather ask you to believe that I will be more faithful and true to you than I have been. I had such fond hopes but it is hard to see how they will be realized but maybe they will.  I shall pray to God that if I do not get back that you may have greater happiness brought into your life than you could have ever known with me.
If I stay in the army a dozen years I shall never get so I like army life. I long so for those that I love and I miss the evidence of the christian life in civil life and which are so lacking here. Sometimes I just feel as if I would like to crawl away to some quiet corner and get away from this noisy, nerve racking hurly-burly life.
I had just finished the letter to you yesterday when I was placed on guard and kept there till 1 P.M. today. I had no trouble and was glad I did not have to take a post alone. I had charge of tow sentries and one of them was on the road leading into camp so I was kept busy reading passes.
Rain began falling shortly after 1 P.M. today and it has been so rainy chilly and dreary since.  I guess that helps to make me feel blue.
I feel sorry I did not see mother and know she will take it very much at heart. I think she will realize how impossible it was for me to get there. I shall write and explain it to her the best I can and I wish you would write and tell her of my visit.  She will appreciate it so much. Mother and you need to sympathize with each other. I feel that you are worrying very much because of me and it is telling on your strength. I only wish you could rest easy but I know from experience just how impossible it is.  I know I should have worried about you traveling alone yesterday had you been obliged to change cars yesterday although you would have gotten along good.
Please accept the deepest love a man can have for his wife and pray and trust and hope that all will end well. Lovingly James

This was the last letter James wrote to Anna in the United States.