This Day in Bovina for October

James Archibald Boggs was born 129 years ago today, October 1, 1884, in Bovina, the son of Thomas Boggs and Jane Archibald Boggs.  He would spend his whole life in Bovina and run the family farm.  James was married three times.  He married first Elizabeth Felton in 1913.  They had one son who died at the age of two months.  Elizabeth died in 1918.  The following year, James married Edith Barnhart (my great aunt).  They would have five children, daughters Anna, Mary, Grace and Helen and son Clifford.  Grace died at the end of 1929.  In early 1930, Edith died after giving birth to Clifford (he died in 1933).  James married for the third time in 1947 to Catherine Cameron Kelsey.  He died in 1972 at the age of 87.

Ninety-seven years ago today, on October 2, 1916, a milk strike led to the Bovina Center Co-Operative Creamery receiving milk from 37 farms, in addition to their regular patrons. These farms were located in South Kortright and Bloomville, as well as above Delhi, on the Little Delaware and at Glenburnie.  The Andes Recorder reported that these farms would continue to send their milk to Bovina “until the question of milk prices is settled.”

Aggie Jeanette Armstrong died 138 years ago today on October 3, 1875.  She was only two months old.  She was the daughter of Frank Armstrong and Jeanette Burns.  She was the second daughter named Agnes that they had lost.  In August 1872, three day old daughter, Aggie Bell Armstrong, died.

The Andes Recorder from 112 years ago today, October 4, 1901, reported that “The uptown creamery is now running full blast and is making 5 ¾ pounds of butter from each can of milk.”

119 years ago today, October 5, 1894, a base ball game was played at Indian Rocks.  Given that it was the Sabbath, it caused some controversy.  The Andes Recorder, when reporting this game, stated that “how the game succeeded we do not know, but such actions as this should be stopped immediately.”

James, son of Alex. Bryden near Lake Delaware, died in Fall Clove 114 years ago today, October 6, 1899, of spinal meningitis.  As later reported in the Andes Recorder: “He had ridden his bicycle over there and was quite warm and this may have had something to do with his illness.  The funeral was held from his home Monday at 11 o’clock, Rev. W.L.C. Samson, officiating, and the interment made here [Bovina cemetery].” He was 21 years old.

Ninety three years ago, on October 7, 1920, the Bovina Town Supervisor and Highway Superintendent requested that a proposition be placed on the November ballot to appropriate money for a “Steam Road Roller.”  The proposition was placed on the ballot, but the Andes Recorder later reported that on election day "Bovina taxpayers voted down a proposition to appropriate the sum of $4,680 for the purchase of a steam roller for use on the road.  The vote was a tie – 64 to 64." The appropriation was approved the following March at a special town meeting.

117 years ago this morning, October 8, 1896, Mt. Pisga was white with snow, the first of the season. This was followed by a heavy frost that evening.

110 years ago today, October 9, 1903, the Catskill Mountain News reported in its Bovina column that “Hamilton Russell of Bovina is building a fine two-story house, 22 x 44 feet, with piazza in front, and equipped with all the modern improvements.  John Tweedie is the mason and James Scott of New Kingston is the carpenter.”  This house was on Mountain Brook Road.

106 years ago today on October 10, 1907, the first load of freight shipped to Bovina via the new station on the Delaware and Eastern at Andes was brought to town by Milton Hastings.  Previously, items shipped by railroad had to be picked up in Delhi.

118 years ago today, the October 11, 1895 Andes Recorder in the Bovina column had the following item:  “A letter recently came to this point office addressed to, Miss Maggie, Bovina Centre, N.Y.  This shows one of the many thousands of examples of carelessness that floods the Dead Letter Office every year.”

Miss Nellie Myers died 113 years ago today, October 12, 1900.  She was only 20.  As later reported in the Andes Recorder, “[s]he had been ill for several months, suffering with gatherings in the head.”  Gatherings in the head appear to be a term for sinus issues.  Nellie was the daughter of Alex Myers, house painter and his wife Isabella, who later was known as the town’s telephone operator.  Earlier in the year, Nellie had been hired to work at Jeremy Barnhart’s on Pink Street in March of 1900 and still was living at Barnhart’s when the 1900 census was taken in June.

120 years ago today, on October 13, 1893, James Coulter headed out for the Chicago World’s Fair.  In reporting this, the Andes Recorder noted that “others talk of going.  We say go, you will never regret it.”

102 years ago today, October 14, 1911, “The lady friends of Miss Jennie Miller made her a welcome home party .... All rejoiced that she is now able to see. Miss Miller was also presented with sum of money.” Jennie had cataract surgery on September 29 in New York City.  This Jennie Miller likely was the daughter of David Miller and his second wife, Isabella Turnbull. She was the great aunt of Fletcher Davidson. Born in 1841, she died in 1925. This photo, courtesy of David F. Hoy, is believed to be Jennie. 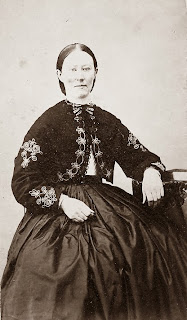 Rev. Joshua Kennedy died 122 years ago today on October 15, 1891.  He had been pastor of the Bovina Reformed Presbyterian Church in Bovina from 1865 to 1885.  Kennedy passed away in Green Castle, Pennsylvania, the town to where he had retired after leaving Bovina.  See the Bovina NY History blog entry for March 18 (http://bovinanyhistory.blogspot.com/2013/03/kennedy-vs-lee-part-i-libel-of-slander.html) and for March 24 (http://bovinanyhistory.blogspot.com/2013/03/kennedy-vs-lee-part-ii-bed-was-badly.html) for more information about Rev. Kennedy and his ‘dust-up’ with Rev. James B. Lee.

117 years ago, on October 16, 1896, as later reported in the Andes Recorder: “A rousing Republican meeting was held ….  Rev. W. L.C. Samson was chosen president, and a number of vice presidents also had places on the stage.  After an eloquent address the president introduced Professor T.H. Roberts of Brooklyn, who gave one of the best addresses ever delivered in Bovina, and in such a manner that every one who had any brains could see what the effect of free and unlimited coinage of silver would be to this country.  He showed that if all the silver bullion was coined no one would be able to get any more money except he had something to give in exchange for it.  Mr. Roberts is a clear and forcible speaker and fully explains the question in dispute.” 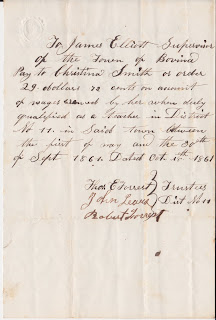 John W. Bramley died 114 years ago today, October 19, 1899, of diabetes, age 81 years.  As later reported in the Andes Recorder, “He was born and always lived in this town and was one of our most extensive and best farmers.  He leaves a widow and four children – three sons John G, William and Fred and one daughter, Mrs. E.C. Dean.  The funeral will take place on Saturday at 11 o’clock from his late residence.”  He was living in the Bovina Center hamlet at his death, but spent much of his life on his farm on Bramley Mountain, which likely was located in the area of Reagan Road.

Ninety five years ago today on October 20, 1918, the first death in Bovina from the “prevailing influenza epidemic” occurred when Mrs. Loron Maxim, passed away at her home on the Hewitt farm up-town.  As later reported in the Andes Recorder, “The remains were taken to Hardenburgh, Ulster county, their former home, for interment.”  The Hewitt farm is now the home of Tom Groves on Mountain Brook Road.

A brief item from the Andes Recorder reported that 118 years ago today, October 21, 1895, “Snow Monday morning.”

103 years ago today, on October 24, 1910, this bill was issued to the Town of Bovina for bridge decking.  This appears to be the decking for a new bridge to the Bovina Center creamery.  The bridge was completed in November 1910. 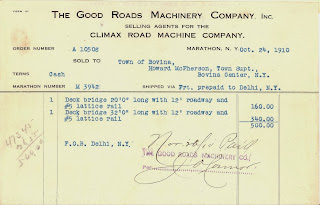 106 years ago tonight on October 25, 1907, as very briefly reported later in the Andes Recorder, “A party was held … at Frank Coulter’s.” Frank's place was the original Coulter family farm on Coulter Brook road, just over the bridge that goes over Coulter Brook.

70 years ago today, October 27, 1943, as later reported in the Catskill Mountain News, “William M. Armstrong, 73, of Bovina Center, died … at Delhi hospital where he had been a patient for one week.  Death was caused by arteriosclerosis and acute arthritis.”

Ninety six years ago today, on October 29, 1917, as later reported in the Andes Recorder, “The rain on Monday night caused the Pink Street brook to rise so much that the foot bridge on Main street was swept down against the arch bridge and about totally wrecked.  Harry Robinson’s family were taken out of their house at 4 o’clock in the morning in a lumber wagon.  Wood was carried away and several hens were washed out of Gideon Miller’s hen house.”

104 years ago in the early morning, on October 30, 1909, Chas McPherson and his wife were instrumental in saving A.T. Doig’s store, later Russell’s, from going up in flames.  As reported in the Andes Recorder, the couple discovered the fire while coming home from a party.  “The fire was on the stoop at the lower side of store and fortunately was discovered before it had gained much headway and was put out before only slight damage was done.  It is supposed that the fire started from a spittoon that had been set out on the stoop the night before and there had probably been fire in it.”

Eighty five years ago on October 31, 1928, Mrs. Leon VanDusen held a Hallowe’en party Wednesday for the pupils of the primary room of the village school.
Posted by Bovina Historian at 8:00 AM