This Day in Bovina for August

I'm bringing you up to date on the daily entries on Bovina History I have been doing on the Facebook Bovina History group since June. I've been asked to share these on this blog.  I will start doing these monthly in November.

111 years ago today, August 1, 1902, it was reported in the Andes Recorder's Bovina column that "Rains still continue and haying does not progress very rapidly." Seems appropriate today.

118 Years ago today, on August 3, 1895, the Bovina ball team went to Delhi to play their team. They not only lost, but were heavily plagued by injuries. The Andes Recorder reported the injuries: “Chan [probably Chauncey] Squires and Leonard Thomson collided while running to catch a fly and were badly cut about the face. Thomson’s cheek was cut so that the services of a physician was required to sew it up and while the doctor was at work dressing the wound John L. Gordon [1871-1908, son of Thomas Gordon and half brother of Margaret Gordon] and Andrew Seacord [1872-1913] fainted. Al Thomson fell on his arm and injured it so that he was disabled.” The paper concluded its report by noting in an understatement that “Taken altogether it was an exciting game.”

Esther Maynard was born 180 years ago today, August 4, 1833, the daughter of Isaac Maynard and Jane Falconer.  She would marry Edward Combs and died on her 63rd birthday in Delancey in 1896.  She is buried in Bovina, where a memorial stone was erected in April 1897 by Woodburn and Smyth of Delhi.

Mary Rotermund was born 168 years ago today, August 5, 1845, in Andes. She was the daughter of Herman and Adelaide Rotermund, both natives of Hannover, Germany. Mary married James A. Coulter in 1868. Widowed in 1882, she died in Bovina in 1931. She was the grandmother of Ruth Coulter Parsons and her sister, Celia Coulter; Don, Bob and Norrie Boggs, and Millard, Art and Ernie Russell.

Seventy-eight years ago, on August 6, 1925, as reported later by the Andes Recorder, “Elmer Gladstone was attacked by a bull and knocked down. Fortunately the bull then walked away a short distance and before it could renew hostilities Mr. Gladstone made his escape.  All the other members of the family were absent from home.”  Elmer probably was Robert Elmer Gladstone, the son of George and Helen Gladstone.  This likely happened on the Gladstone farm, located on what is now known as Bob Hall Road.  Elmer was 49 when this accident happened and would live to be almost 81, dying in 1956.

117 years ago today, on August 7, 1896, as later reported in the Andes Recorder, "The union Sabbath School picnic in Michael Dickson’s fine grove last Friday passed off very nicely, and all appeared to enjoy themselves. The sports were numerous. There were races by the little folks, then a tug of war between the married and single men, but the young men were sharp, laid down and neither side won. After dinner D.L. Thompson, master of ceremonies called the assemblage to order and invited the ministers, superintendents and their wives to the platform and Mrs. Myres recited “Deacon Jones’ Prayer,” and Revs. Lee, Buck, Myres and Samson made short addresses. Sports were again indulged in, and the short and also the four mile bicycle races were won by Elmer McNair, the foot race between John Gordon and Milton Hastings was won by the latter. It was estimated that there were five hundred people present."

118 years ago today, August 8, 1895, there was a 'theft' at the home of Rev. Hayes. It was briefly reported in the Andes Recorder: "At the reception at Rev. Hayes’ last Thursday evening some one borrowed two cakes."

Eighty-five years ago today, on August 9, 1928, three year old John Storie, the son of Mr. and Mrs. William Storie, fell and broke his collar bone.  The accident happened at the home of his uncle, Fletcher Davidson, while he was at play with his little cousins.  This is where the Denisons live now.  Tragically, John would die in another childhood accident while, again, playing with his Davidson cousins.  In January 1938, when he was 12, he was sledding with Alan Davidson when he was thrown from his sled, rupturing his spleen.  His spleen was removed but he died about three days later.

One hundred eighty six years today, on August 10, 1827, George Laidlaw was born in Scotland, the son of David Laidlaw and Helen Knox Hart.  He came to America as a child and married Janet Hume in Delhi.  They would have five children.  George died at the age of 49 in 1877 and is buried in Bovina.

115 Years Ago today, on August 11, 1898, the Board of Railroad Commissioners of the State of New York held a public hearing on the application of the Delaware Railroad Company to lay a railroad from Delhi to Andes, with a spur to Bovina.  Here’s the Public Notice as published in the August 6 Delaware Republican. 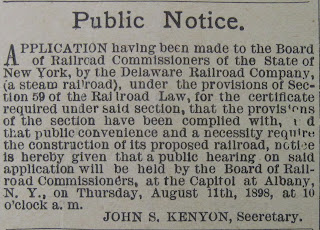 One hundred and twelve years ago today, on August 12, 1901, work was commenced on construction of the Bovina Centre creamery.

119 years ago today, August 13, 1894, James Hastings, Sr., one of Bovina’s oldest citizens, died at the residence of his son James.  He was 97 years old.  That same day, the contract for building the bridges at the Butt End and at John Thompson’s was let to a gentleman from Bloomville, for about $900.  This was related to repairing flood damage earlier in the summer.

Margaret McDonald was born one hundred and ninety years ago on August 15, 1823 in Dundee, Scotland.  She was the daughter of Henry McDonald and Margaret Donald.  The family emigrated to Bovina where Margaret would marry William Archibald in 1845.  They would take over the McDonald family farm at the Butt End about ten years later.  Widowed in 1883, Margaret died in 1907 at the age of 84 and is buried in Bovina.

A special school meeting was held in the Coulter Brook district one hundred and twelve years ago today, August 16, 1901.  As later reported in the Andes Recorder, “both those for and against a new school house had their forces marshaled and the result was a tie vote.  The result will probably be that the Commissioner will condemn the old shell of a building now in use.”

120 Years Ago, the following item appeared in the August 18, 1893 Andes Recorder - Bovina is noted for its great butter – pure Jersey butter that is a strong competitor of Elgin, and is growing in favor with the butter men every year.  A correspondent says:  “When we were young 100 pounds of butter per cow was a fair average; now from 300 to 400 pounds per cow does not satisfy the Bovina dairyman.  We expect, if they keep on grading their stock, by the time of the next centennial the Bovina cow will be giving butter instead of milk.”

Ninety four years ago yesterday, on August 20, 1919, one hundred and fifty relatives attended the Archibald reunion held on Wednesday at home of William J. Archibald.

118 years ago today, on August 22, 1895, as later reported in the Bovina column of the Andes Recorder, “Five tramps passed through this village Wednesday morning.”

102 years ago today, August 23, 1911, as later reported in the Andes Recorder "The school controversy in the D.J. Miller district was settled at a special meeting Wednesday evening by the district voting to have school this coming year. For several years the pupils of this district have been sent to the Center school."

Eighty seven years ago today on August 24, 1926, William Gavett of Delhi, was severely scalded by steam Tuesday while employed at the Bovina Center Co-operative Creamery.

Ninety four years ago today, on August 25, 1919, as later reported in the Andes Recorder, "George H. Russell and wife arrived home the first of the week from Racene, Wisconsin, where he had been with a party after autos.  He drove a Mitchell thru to Delhi, having a fine trip across the lakes."

Two items, both family reunions for August 26: The descendants of David, William and Berry Miller (from the Scottish borders) held their annual reunion eighty nine years ago today (August 26, 1924). The reunion was held at Belle Miller's (now Amy and Tom's house across from Russell's Store). Later newspaper reports said that about 75 people were present but that "several families were not represented." Exactly a year later, on August 26, 1925, the Archibald family reunion was held at the home of Mrs. Alexander Hilson (Mike and Christine Batey's). The newspaper noted that "There was large attendance, about 100 of the clan being present."

Eighty five years ago today, on August 28, 1928, as later reported in the Andes Recorder, Bovina resident “Miss Caroline Dickson arrived home...from her European trip. Her sister, Mrs. Curran accompanied her here.” Caroline had left for Europe on July 6. She had arrived back in New York harbor two days before on the “Carona,” which had left from LeHavre on August 18. This is the passenger list from the Carona, downloaded from Ancestry.com, showing her listing. 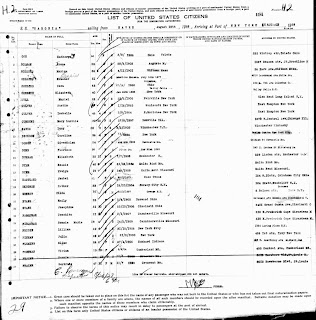 Eliza T. McDonald was born 175 years ago today on August 29, 1838, the daughter of Henry McDonald and Margaret Donald.  She was married to Andrew T. Coulter in 1861, by whom she had four children before being widowed in 1867 when her husband died of consumption (in my house, as it so happens).  She remarried in 1878 to William Richardson, himself a widower and the grandfather of Isabell Irvine Russell.  Eliza died in 1911.

173 years ago today, on August 31, 1840, Revolutionary War vet James Vanderburgh died, aged 83 years. He is one of three Revolutionary War Soldiers buried in the town. See the Bovina NY History blog at http://bovinanyhistory.blogspot.com/2012/11/stories-from-bovina-cemeteries-american.html for more about Bovina's Revolutionary War soldiers.
Posted by Bovina Historian at 8:00 AM