One hundred and twenty five years ago today, on November 2, 1888, Jimmie McClure died. Scottish born, McClure was not in Bovina all that long, but was living in the town when he died and likely because of this is also buried in Bovina.  Born in 1814 in Dumfrieshire, Scotland, he came to the United States around 1839.  The notice of his death stated that he also had been in the British Army and was collecting a pension for service in the Mexican war.  The British Army service is possible.  His emigration may have been more than just seeking an opportunity in America.  He appears on the 1860 Federal Census for Delhi, New York, listed as a "British Deserter/loafer."  Was his sailing to America that desertion?  We just do not know.

His Civil War experience also was slightly checkered - he enlisted in Hamden in the 101st NY Volunteers in December 1861 but deserted in April 1862 in Washington DC.  He then re-enlisted in Cortlandville in July 1862 in the 157th, where he was paid $50.  Such desertion and later re-enlistment was a fairly common occurrence - and soldiers generally were not punished if they re-enlisted.  James stayed on to the end of the war, mustering out with his company on July 10, 1865 at Charleston, SC.

Then he disappears from the records again until towards the end of his life, when he shows up in Bovina.  In December of 1887, McClure had been admitted to the Delaware County Poorhouse.  He was noted as being "intemperate" and that he was in the poorhouse because he was old and destitute.  The record also recorded him as being single. He was awaiting transfer to a soldiers' home, but at some point the following year, he was moved to Bovina and was being supported by the town when he died.  The Delaware Gazette reported that "'Jimmie' McClure, the eccentric character so well known here and in this vicinity, died in Bovina last Friday.  Mr. McClure formerly served in the British army, and was a soldier in the Mexican war and also in the war of the rebellion.  He was a pensioner for services in the Mexican war.  Although he had been in so much war he was never wounded." 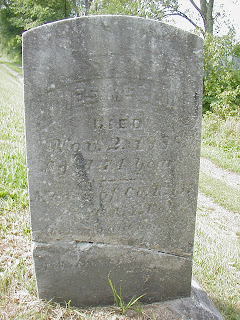 McClure was buried in Bovina, the expense of the burial and likely this headstone being borne by the town.
Posted by Bovina Historian at 8:00 AM