This Day in Bovina for November

184 years ago today, on November 1, 1829, Jannet Raitt was born. The daughter of Thomas Raitt and Jennet Thorburn, Jannet would die in Bovina in 1846 when she was only 16.

Ninety eight years ago today, on November 2, 1915, one of the items appearing on the ballot in Bovina and statewide was a constitutional amendment to confer equal suffrage upon women. In Bovina, there were 77 votes in favor but 103 against, with 32 blank or void votes. The amendment failed statewide. Here is the sheet that recorded the results of this vote. Two years later another women suffrage amendment succeeded in New York State. Bovina voters this time supported the amendment - by 13 votes. At that election, 97 voters supported women suffrage and 84 voted against it. 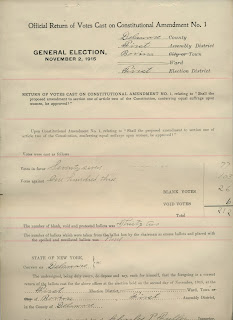 155 years ago today, November 3, 1858, Edward O’Connor signed this document submitting his claim for expenses as commissioner of highways.  O’Connor is noted in history as one of the two men sentenced to hang for the killing of Undersheriff Osman Steele during the Anti-Rent War in 1845.  O’Connor’s sentence was commuted to life in prison and he was released from prison within about a year.  He had been a town official before going to prison and resumed participating in town government after his release. 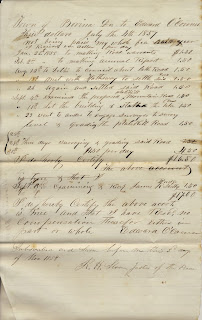 The widow of the late John W. Bramley was found dead in bed 114 years ago this morning, November 4, 1899.  As later reported in the Andes Recorder:  “[Mrs. Bramley] had not been feeling well for a few days and had complained of her stomach.  The doctor was there Wednesday but it was thought she would be better in a few days.  Thursday morning her son Fred, went to her room about 4 o’clock and spoke to her and receiving no answer, thought she was asleep.  About an hour later he went back and found her dead.  She was cold and must have been dead when he was in the first time.  She was 72 years old.”  Her husband John had just died  two weeks previously on October 19.

About 100 of the 212 women voters in Bovina voted 95 years ago today, November 5, 1918.  As reported later by the Andes Recorder, “Their votes did not change results in the town except to swell the Prohibition vote by about 40.”  Women in New York gained the right to vote in the November 1917.  This was the first time in New York that women were able to vote.  Women suffrage became nationwide in 1920.

113 years ago on Election Day, November 6, 1900, the ladies of the Methodist church served meals in A.T. Strangeway’s rooms and the receipts were about $15.  Also reported on Election day in the Andes Recorder was the number of votes cast in Bovina – 262.  This was a gain of 11 over four years previous.  There were two void ballots and 11 Prohibition votes.  Of the total vote McKinley received 190, a gain of 11, and Bryan 58…

Fifty eight years ago today, on November 7, 1955, John S. Burns died.  Born in Bovina in 1888, he was the son of Alexander Burns and Nancy Miller.  He married Elizabeth Carnright and had two daughters, Mary, who would later marry Harold Lounsbury, and Agnes, who was married to Robert Burns, Sr.  He was widowed when his wife Elizabeth died in 1952.  John is the grandfather of Jack and Bob Burns.

216 years ago today, on November 8, 1797, Margaret Donald was born in Scotland.  She married Henry McDonald in 1818 in Scotland and they started their family there.  Sometime after 1832, they emigrated to the United States.  They had six children, four born in Scotland and two in Bovina.  They farmed in the Mountain Brook area and then retired to a house just outside of Bovina Center – the house I now live in as it so happens.  Margaret was widowed at the end of 1879 and survived her husband by barely a month, dying on February 3, 1880.

Ninety seven years ago today, on November 9, 1916, William R. Miller died at the age of 63.  The Miller family had a bereavement three days earlier, when William’s cousin Kate Barnhart lost her husband Jeremy at the age of 49.  Both cousins lived on Pink Street.  William had the farm at the corner of Pink Street and Scutt Mountain Road.

149 years ago today, on November 10, 1864, tavern keeper Dorcas Aitkin presented this bill for various services to the town, including lodging four recruits likely receiving town bounty to help Bovina meet its quota (who these men were we do not know).  Her hotel/tavern was located where the Jardine house is now located*. 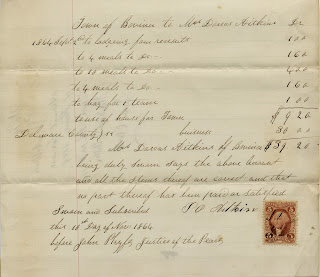 Gordon Coulter entered the blacksmith shop of Gideon Miller to learn the trade 106 years ago today, November 11, 1907.  Gordon probably is Elton Gordon Coulter (1891-1945), the son of David and Lucy Coulter and an uncle to Grace Coulter Roberts.

113 years ago today, as later reported in the Andes Recorder, “Supervisor John A. Irvine went to Delhi [on November 12, 1900] … to attend the meeting of the supervisors.  John looks well to the interests of the town.”  John was the father of Isabell Russell.

Eighty eight years ago this evening, as later reported in the Stamford Mirror, “A masquerade and box social was held in the Hillis hall on Friday night, November 13,[1925] for the benefit of the lecture course. The proceeds amounted to $23.15. Season tickets were on sale at the social and there will be an opportunity given on Tuesday morning, November 24th, at nine o’clock at the post office for those having secured season tickets and choose their seats for the course. The first number will be given November 28th in the Hillis Hall by the ‘Fernandez Russell Duo.’” Hillis Hall was once known as Strangeway’s Hall and later was Clayt Thomas’s garage.**

104 years ago today, on Sunday, November 14, 1909, the pastors of the Bovina United Presbyterian, Reformed Presbyterian and Methodist churches all preached sermons against dancing.

Ninety five years ago today, in its November 15, 1918 issue, The Andes Recorder reported that “Andrew T. Doig, who for a number of years has conducted a general merchandise business in the Thos E. Hastings store, has sold his business to Cecil Russell, who will take over the business January 1.”

109 years ago today, on November 16, 1904, 90 year old Mina Mabon died at the home of her son, William near Lake Delaware.  The daughter of James Cairns and Jane Nichol, she married William Mabon in 1841.  They had six children and were married 52 years when William died in 1893.  Mina was buried next to her husband in the Bovina Cemetery on November 18, 1904.

Margaret Sanderson Doig died 141 years ago today on November 17, 1872 of typhoid fever.  Born in Washington County, NY in 1807, she was the daughter of Patrick Sanderson and Nancy Hodge.  She was married Andrew Doig and would have nine children.  Andrew died in 1865.

Eighty nine years ago today, on November 18, 1924, Mrs. Alex Hilson and Mr. and Mrs. Wm. C. Russell moved into their new houses.  Mrs. Hilson's home is where Mike and Christine Batey live (Mrs. Hilson was her great grandmother).  Mr. and Mrs. Russell's home is now the home of Mark Schneider and Julie Hilson.

134 years ago today, November 19, 1879, Alexander Meyers was married to Isabelle Laing.  The couple would be married for almost 68 years.  In 1939, the couple celebrated their 60th anniversary with a party given for them in the Bovina UP Church parlors.  Alex died in 1947 at the age of 91.  His wife Isabelle died 4 years later in 1951, when she was 90 years old.
134 years ago today, on November 20, 1879, Isabella Coulter Armstrong died in Bovina, aged 81 years. She was the daughter of Francis Coulter and Nancy Glendenning and was the only one of their children to be born in Scotland. She was married to John Armstrong and was widowed in 1864. She was survived by six of her eleven children at her death. (Isabella is my 4 greats grandmother.)

Ninety years ago today, on November 21, 1923, as later reported in the Andes Recorder, "Fletcher Davidson moved from the Cable house [later known as the Currie house and located next to the old firehouse] to the house of his mother situated at the foot of Russell Hill [where the Denisons now live]."

Ninety five years ago today, November 24, 1918, memorial services were held for Sergeant James D. Calhoun, who had been killed in action in France in October. As later reported in the Andes Recorder, "the U.P church was filled to overflowing on Sabbath at the memorial services for Sergeant James D. Calhoun.  Rev. G.A. Forbes preached the sermon.  A delegation of Sheldon Rifles from Delhi were present."  See the Bovina NY History blog entry for November 2010 for more about James.

Earl Harold Miller, son of John M. Miller of Bovina, and Miss Rachel Mary Sullivan, of St. Paul, Minnesota, were married 99 years ago today, November 25, 1914, in Minnesota. Miller was living in Minnesota by then, but had grown up on Pink Street, the son of John and Bertha Miller, at the farm that later became Suits Us Farm.*** He was a lawyer in St. Paul and ran for congress there (unsuccessfully) in 1920. Earl died in 1955 in Walton and is buried in Bovina.

Ninety years ago today, on November 26, 1923, the Bovina Town Board "met with a Mr. Rose, a representative of the New York State Gas and Electric Company to consider the giving to the said company a Franchise to build, maintain and operate a light and power line in the town.”  The franchise was granted.

Ninety three years ago, today, November 27, 1920, Mrs. John Irvine departed from Bovina to visit her son, William, in Seattle. The Andes Recorder later noted that she "made a quick trip and arrived the following Wednesday morning [December 1]". William was married in 1922 and in 1926 was diagnosed with a brain tumor. He battled the tumor for three years, undergoing several operations, including one at the Mayo Clinic in Minnesota. Elizabeth would pay him a visit while he was at the clinic. William ultimately succumbed to the tumor, dying in May 1929 in Seattle, when he was 42. He left behind a widow, three brothers and his sister, Isabell Russell.

Charles F. Smith was married to Christina Lamont 157 years ago today, November 28, 1856.  This was his second marriage.  Born in Scotland in 1824, he first married Annie Williamson, by whom he had two children before her death in November 1855.  There were no children from the second marriage.  Charles was widowed again in 1898 and he died 10 years later in 1908.  He ran the hotel at what is now Jardine's for many years.*

Ninety five years ago today, on November 29, 1918, John Elliot moved from his house on Maple Avenue "to the Thomas Miller house."  The following Monday, Mrs. John Irvine, the mother of Isabell Russell, moved into the Elliott house (now the home of Tony and Norma Gabriele)****.  Note:  I'm still trying to figure out which house was the "Thomas Miller house," but I think it is the house now owned by Wayne Morris, next door to mine.*****

On November 30, 1894, 119 years ago today, a dance was held at Hoy's Hall.  As briefly reported later in the Andes Recorder: "Thirty-three numbers. Music by Eliott and Sloan."  I'm not exactly sure where Hoy's Hall was located (it was NOT Strangeway's Hall), but likely it was on what is now the Tim McIntosh property, which was owned by William Hoy for many years.