I feel like I'm about the only Bovina kid never to visit Indian Rocks. Well today, this has been rectified - somewhat unexpectedly, but rectified nonetheless.

In October, fresh from moving to Bovina full time, I decided I needed to track down this locally famous rock outcropping that overlooks the Bovina Center hamlet. I made an attempt then and again in early January and failed both times. Then I checked one of those websites with aerial views of places and viola! I saw exactly where it was located. The snow and cold discouraged me from any further attempts until spring. I didn't want to be lost deep in a snowy wood on a frigid day. Safer to keep my hikes closer to home (and within sight of civilization).

Today I decided to go out on my snowshoes in the fields that overlooked the hamlet. I trekked up and over some fields I had never hiked in before, getting some great views of Bovina Center, including my house. Then, just to make the exercise worthwhile, I started following a snow mobile trail up over the hill and into the woods. At this point, I wondered to myself "Could this be the way to Indian Rocks?" Just a hunch really. I didn't want to get too tangled in blackberry bushes and tree limbs while wearing snowshoes trying to find it. But as long as the trail was there, reducing the risk of an altercation with the vegetation, I decided to plunge ahead.

As I continued trudging along, I began to notice something through the trees. Could it be? Was it? Yes, I had stumbled upon Indian Rocks. Hooray! Here are three of the many pictures I took today, the first being just after I realized that I may have found the rocks. It's rather hard to photograph Indian Rocks in its entirety because of the trees (and the fact that it's quite a long geological feature). 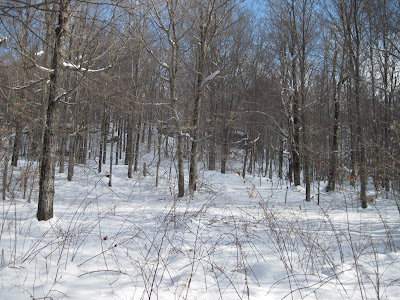 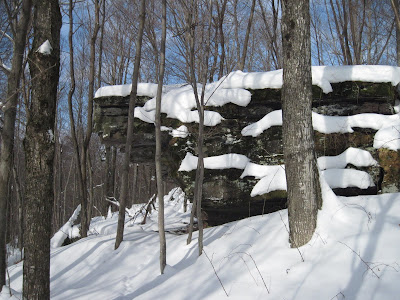 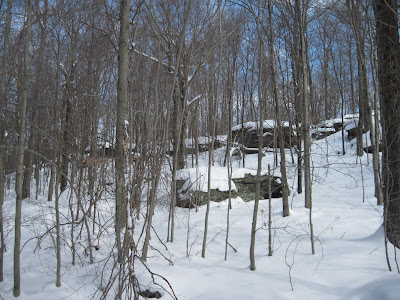 Here's probably the earliest image of Indian Rocks. This is a segment from an 1888 painting now in the Bovina Historical Society's museum of the Bovina Center hamlet. You can plainly see toward the top of the image Indian Rocks. And without the trees, you can get a better idea of its size. 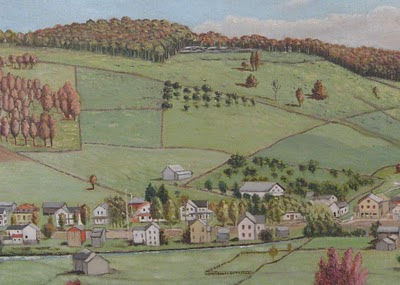 Well, all I can say is that it's about time I got my butt up there! Better late than never...
Posted by Bovina Historian at 3:04 PM