James Calhoun and the Great War

November 11 started out as Armistice Day, marking the day that the first World War ended in 1918. There were several Bovina boys who served in the Great War. One of them was James Calhoun. James was born in 1889 in Andes but grew up just over the border in Bovina. On November 14, 1917, he was married in Bovina to Anna Bell Barnhart. That same day, James received his official draft notice. So after only 9 days together, James left his new wife and was shipped off to Fort Dix, New Jersey. After a couple of weeks, he was shipped further south to Camp Greene in Charlotte, North Carolina. In late March, he came home to Bovina for a 30 hour furlough. In early April, he was shipped off to France.

On October 13, 1918, James was killed in action during the Battle of the Argonne. His wife did not find out until a day after her first wedding anniversary - and four days after the Armistice. Below is the telegram she received notifying her of her husband's death. She later was told that the death date in the telegram of October 14 was wrong and that he died a day earlier. 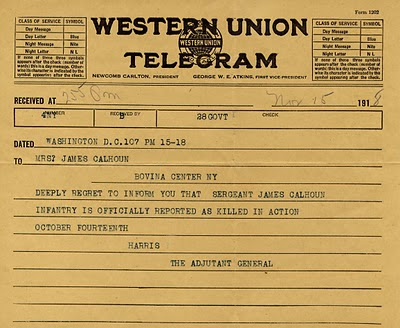 It happened on October 13 near the town of Cunel. The first battalion was about to attack but there were some German machine guns concealed in the underbrush at the right and it was necessary to clear them out before the advance could be made - so Sergeant Calhoun volunteered to accompany Lieutenant Williams and arrived with hand grenades they bravely started to clear the way for their comrades, and it was while doing this courageous thing that the same shell brought them both instant death. 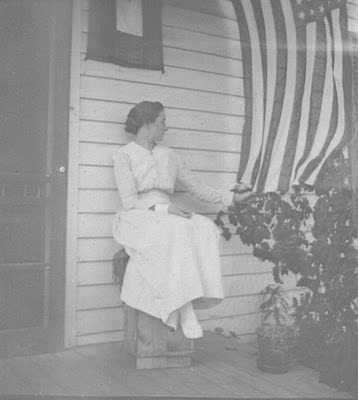 Anna Bell was widowed for four and a half years. In May 1923, she was married in Bovina Center to Benson LaFever. They had four sons, including my dad, Charlie LaFever.

Grandma had saved all the letters she received from her first husband, along with some of the letters she sent to James while he was still in the United States. We also have many of her photographs. This poignant picture of my grandmother has always been a favorite of mine. I think it was taken after James's death and shows her with what probably was the flag that was on James's coffin. Grandma always remembered and honored the sacrifice her husband made - and we also remember and honor the sacrifice she made in the Great War.
Posted by Bovina Historian at 4:57 PM