Ok, I'm in a baking rut with this cookbook, but I find that easier. I'll attempt a main course soon. In the meantime, I tried another cake.

I used canned blackberries, including the liquid. Butter the size of an egg was about 4 tablespoons. I went easy on the cloves, with only 1/4 teaspoon, and left out the nutmeg because, well, I didn't have any! And I added one critical item that I think was missing - baking soda.

It took two attempts. My first try was ok but the seeds were noticeable while the berries were not. I made a mistake by mixing the berries with everything else. So for my second attempt, I put in everything including the blackberry liquid, but not the berries themselves. I had to carefully fold them into the batter before baking. With the second attempt, you could at least recognize and taste the berries. That was an improvement, but while edible, I wasn't bowled over by this. Sometime, I'll try fresh blackberries - but I'll then need to add more liquid to make it so the berries can be folded into the batter.

The contributor of this recipe was my great great aunt, Bertha Anderson Miller. She was born in 1857 and married John McCune Miller in 1886. She was widowed in 1920 and died in 1938. The Millers lived on what later became Suits-Us Farm on Pink Street. 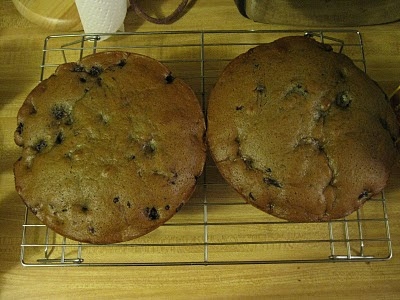 Posted by Bovina Historian at 12:00 PM