Last night I went to the Andes Hotel to hear Esquela, a local band that includes Bovina native and resident John 'Chico' Finn, as well as other people with Bovina or Delaware County connections (go to their website for more information on the band: http://esquelatheband.com/). Also participating last night was Bovina native Ira McIntosh. The performance was a fundraiser for the Bovina Historical Society.

I enjoyed hearing this 'Bovina Rock' band - it is one of several with Bovina connections. Bovina Records (http://www.bovinarecords.com/) features a number of these musicians, including Janet Havens Stewart, Ira and Laurie McIntosh, Future Farmers of America, Pispoure', and College Farm (featuring Andy and Matt Pelletier, the founding fathers of Bovina Rock), as well as Esquela. 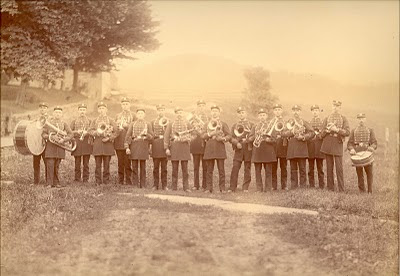 And then there's the Bovina Coronet Band. No, you won't find it on the Bovina Records site. It comes from a somewhat earlier time - the 19th century, actually. We don't know much about the band other than it existed. I have not determined when this particular photo (courtesy of the Bovina Historical Society) was taken or who the band members were - though I suspect there are several Coulters. I say that because some of the members bare a striking resemblance to the late Herb Parsons, whose mother was a Coulter. 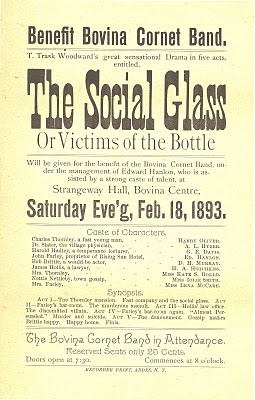 To raise money, they too held a benefit, as evidenced in this poster. In this case, however, they were the beneficiary. Whether they actually played anything or, as the poster says, were simply in attendance is not clear. Nor do we know how well they did (though a little research in the newspapers from this time might tell us more - it's on my research list).

The Bovina Historical Society seemed to do pretty well from last night's event. The generosity of all those who donated is greatly appreciated. And a big thanks to Chico Finn for offering his time and that of the other members of Esquela to help the society raise funds for Russell's Store.

Posted by Bovina Historian at 9:30 AM