This Day in Bovina for January 2021

180 years ago today, on January 1, 1841, the Trustees of Bovina school district number 3 (the Mountain Brook area) provided this document showing the books in the school's library. Books included Scott's History of Scotland, Lives of Early Navigators,  American Husbandry, and Russells History of Palestine." The document was submitted by trustees James M. Hastings and John Miller.
118 years ago today, the January 2, 1903 issue of the Andes Recorder included these Bovina items: David Sloan, of Colorado, is renewing old acquaintances in town. Aaron Whitney, who went to Illinois last spring, has returned to Bovina. Mrs. F.R. Coulter has purchased a large monument from Woodburn & Smyth, which will be erected in the Bovina Centre cemetery, to the memory of her late husband.
Forty-one years ago today, on January 3, 1980, Bovina Supervisor Charlie LaFever signed this oath of office for his second term as Bovina Town Supervisor.

Seventy-nine years ago today, January 4, 1942, this telegram was delivered to Marjorie Russell while she was taking a train back to her home in Madison, Ohio where she was teaching. It appears she was planning to leave the train in Erie but was being advised to take the train on to Painesville where she would be met by Rae Storie.  Madison is between Painesville and Erie. 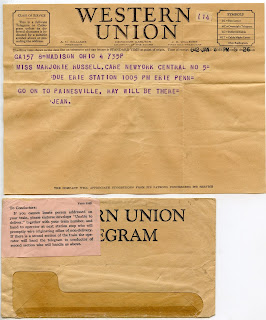 135 years ago today, the Bovina column in the January 5, 1886 Stamford Mirror reported that "A donation for the benefit of Rev. Mr. Deming was held in Dickson's Hall on Wednesday eve. Dec. 30. Owing to the fact that the hall was formerly used as a skating rink, or, perhaps, because it is located so far above the earth, only a few were in attendance, and the proceeds amounted to only about twenty dollars." I'm not 100% sure but I think Dickson's hall was the second floor of what is now Brushland Eating House.

164 years ago today, the January 6, 1857 issue of the Bloomville Mirror carried this memorial poem composed on the death of Mrs. J. Lewis. Mrs. Lewis was Jane Wyear, born 1769 in Scotland. She had four children. Her husband, John, had predeceased her in 1853. She is buried in the old Reformed Church cemetery at County Route 6 and Bovina Road. 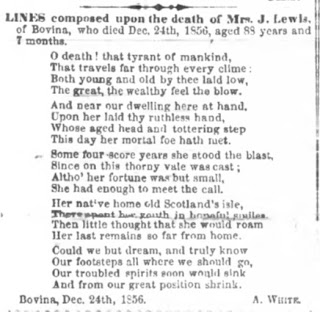 Thirty-five years ago today, the Bovina column of the January 7, 1986 issue of the Stamford Mirror Recorder, reported that "The Rev. Karen Patricia. Miss Marjorie Russell and Dr. and Mrs. Allen Russell of Concord. Massachusetts were all Christmas Day dinner guests of Miss Enid Carter at the Old Home Place." The Old Home Place was the name Enid's mother, Edna, had given to their home on Pink Street.

Forty-six years ago today, the Bovina column of the Stamford Mirror Recorder for January 8, 1975 reported that "Mr and Mrs. Raymond Rabeler and family were last Thursday dinner guests of his parents, Mr. and Mrs. Alex Rabeler, Sr., before returning home to Homer [NY]." The same column reported that "Mrs. Walter Reinertsen and daughter, Andrea, of Rome, [NY] were guests for several days of last week at the home of Mr. and Mrs. Clark Lay." And another report from the column: "Misses Jean and Judy Tator of Oneonta spent Christmas day with their parents, Mr and Mrs. Burt Tator."

137 years ago today, the January 9, 1884 issue of the Delaware Gazette reported under the headline  "Elegant India Ink Portrait." the following: "A. L. Dreyfus has just had completed two large, life-size portraits, one of the late David Black, the other of the late James Coulter, both of Bovina. These pictures, for beauty of finish, cannot be excelled by any other house in tbe State. Mr. W. T. Black, and Mrs. James Coulter, for whom the pictures were made, express themselves very highly pleased with the work, and many others say they are the finest-made pictures they ever saw. A great many of you, no doubt, are familiar with the name of David Black, he having served his town for eleven consecutive years as Supervisor, the longest term of this office held by any man in his town, with the exception of the late Judge Cowen, who served for sixteen consecutive years." I do not know where these portraits exist now, if they do at all. If anyone knows, contact me.

125 years ago today, the January 10, 1896 Andes Recorder in its Bovina Column had the following commentary:  "Your correspondent thinks if parents would keep their children in off the street and out of the stores a little more there would be less fault to find about children being mean and saucy.  They are allowed to go where they please from morning until late at night and no one knows what mischief they are into."

Ninety-three years ago today, the January 11, 1928 Stamford Mirror-Recorder reported the death of Elmer G. Gladstone:  "On Wednesday, January 4th, word was received of the death of Elmer George Gladstone at his home, Farr, Col[orado]. The cause of death was pneumonia. Mr. Gladstone was a native of Andes and was 62 years of age. His earlier years were spent in Andes and Bovina, living here for a number of years where he was a carpenter by trade. He left Bovina nearly 20 years ago." More about Elmer can be found in the Bovina NY History blog at https://bovinanyhistory.blogspot.com/2016/05/coulter-and-gladstone-builders.html

Ninety-two years ago today, the Bovina column in the January 12, 1929 Delaware Republican reported that "Mrs. Jane L. Dickson is taking a vacation with her daughters at Port Jervis and Poughkeepsie, also at Washington, DC"

141 years ago today, the January 13, 1880 Stamford Mirror reported in its Bovina column that "We have been informed that Mr. Black, our Supervisor, kept 2 1/2 percent of the school funds for his trouble paying over the same. Black is more for self than for the schools." This was refuted a couple of weeks later. A statement, published in the Utilitarian, reads: "Mr. Editor - That report in regard to Mr. Black retaining a percentage of the school moneys is false. I was wrongly informed. As I did not intend to injure Mr. Black in any way. I take this opportunity to correct the mistake, and say that there is no truth in the report." The Delaware Republican, which republished this statement, noted "No one acquainted with Mr. Black believed the story in the first place, and all fair ment regarded his denial as conclusive. The person who made a direct charge, so capable of being refuted by the records, was probably the dupe or tool of some person who wished to injure Mr. Black without burning his own fingers." 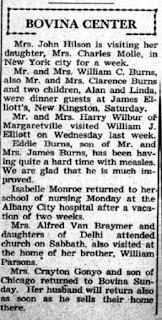 Sixty-seven years ago today, January 15, 1954, as later reported in the January 21, Bovina column in the Stamford Mirror, Mary Anne LaFever celebrated her 7th birthday at her home. Here's the full report of who attended. 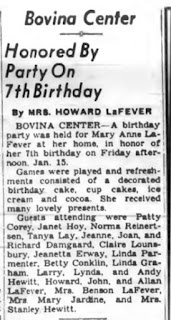 Fifty-five years ago today, the January 16, 1966 Delaware Republican Express reported the following: "Mr. and Mrs. James Barnhart spent a few days last week at the home of their son-in-law and daughter, Mr. and Mrs. Francis Ruff, of New Kingston." The same column also reported that Edwin Hall of the Orange Community College of Middletown was home for the weekend."

139 years ago today, the Bovina column of the Stamford Mirror for January 17, 1882 included this item: "John Coulter, of Georgetown, Colorado, was in town a few days this week. Mr. Coulter is a member of the Colorado Legislature and the originator of the famous "Indian scalp and skunk skin" bill. More about John can be found on the Bovina NY History blog at https://bovinanyhistory.blogspot.com/2020/05/bovina-ex-pats-john-coulter-colorado.html

134 years ago today, the Bovina column in the January 18, 1887 Bloomville Mirror included this item: "Jim knew we were going to have cold weather after New Years. So he prepared to face the cold blasts of winter by getting a large stock of mittens, on hand. Jim is long sighted." As to who is meant by 'Jim' I have yet to work out. The major merchants in Bovina at that time period were John Hilson, Thomas Strangeway and Thomas Hastings.

109 years ago today, the January 19, 1912 Binghamton Press reported the death of a Bovina doctor, under the headline "Dr. Dickson of Bovina Center Dies Suddenly of Apoplexy." The article went on to report that "Dr. Gilbert J. Dickson, an esteemed physician of Bovina Center…died suddenly at his home Wednesday morning. Apoplexy was the cause of death. He had been in his usual health Tuesday, having driven with several members of his family to the train, where they started for Syracuse University. On his return he attended some patients and went to the stable to look after his horses. He was found in a semi-conscious condition later, and died in a few hours. He was well known in Oneonta where his brother, James Dickson conducts a pharmacy." Dr. Dickson built and lived in the building that is now the Brushland Eating House. He left behind his widow, the former Jane Loughran and five children. Dickson is buried in Bovina.

Seventy-one years ago today, the January 20, 1950 Catskill Mountain News reported in its Bovina column that "Mrs. Frank Pindar of Grand Gorge visited her daughter, Mrs. Charles McIntosh [aka Eva], Saturday." The same column reported that "Some of our townspeople are taking advantage of the adult education classes held in the Delhi central school."

Seventy-eight years ago today, the January 21, 1943 Delaware Republican carried a rather brief Bovina column with 4 items: 1) Miss Elizabeth Strangeway recently passed away at the Fox Hospital in Oneonta, where she was taken with a broken hip on January 10th. 2) Mrs Fred DeSilva is going to store her furniture and take a position in Sidney. 3) Mr. and Mrs. Ernest Russell were at Andes on business Monday afternoon. 4) Mrs. William Hissman was in town Thursday and Friday of last week.


123 years ago today, on January 22, 1898, the voters of the Prohibition party met at the home of Thomas Miller and nominated this slate of candidates for town office. 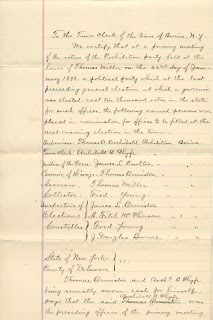 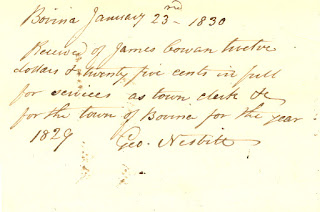 Seventy-seven years ago today, January 24, 1944, this invitation to the wedding of Glenn Hobbie and Anna Boggs was postmarked and sent to Cecil and Isabell Russell and their daughter Marjorie. 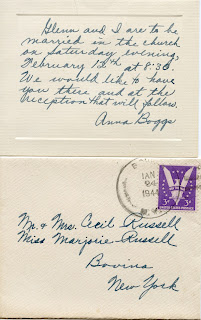 173 years ago today, on January 25, 1848, the Commissioners of Excise for the town of Bovina issued this license to "Alexander Kinmouth to retail Strong and Spiritous Liquors…" His tavern was located at the former Clark Lay residence in Bovina Center, now the home of Betty Powell. 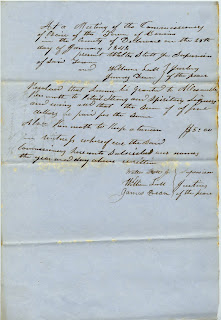 120 years ago today, on January 26, 1901, the Bovina Board of Health adopted a resolution quarantining the entire "herd of cows on the farm of T. Ormiston…" because of the prelevance of tuberculosis. 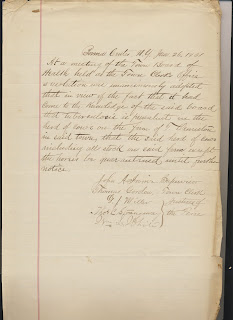 110 years ago today, the Bovina column of the January 27, 1911 Andes Recorder reported that "James A. Gow has decided not to go to Andes as manager of the Andes Creamery Co. plant and will probably continue as manager of the co-op plant here."

Fifty-six years ago today, the Bovina column of the January 28, 1965 Delaware Republican Express reported that "Mrs. Jack Hilson's father, Malcolm Hotchkin, was taken to Cooperstown to the Bassett Hospital for further treatment last Monday. Mrs. Hilson was up to see him Friday and his condition was about the same." Malcolm passed away a little over a month later on March 13.

181 years ago today, the January 29, 1840 issue of the Delaware Gazette included this notice about a medical partnership involving Solomon Green and John Ferguson. For more information about these early Bovina physicians, check out the Bovina NY History blog: https://bovinanyhistory.blogspot.com/2014/06/the-succession-of-physicians-bovina.html

142 years ago today, the January 30, 1879 Andes Recorder had this very brief item: "Bovina has the measles, and a town fire insurance company."

Forty-eight years ago today, on January 31, 1973, this letter was sent to the Board of Directors of the Bovina Center Cooperative Dairy. The letter noted that "on the basis of current product operation…that the cash flow will be exhausted about July 31, 1973." Given this situation, the creamery was closed two months later on March 31, 1973. 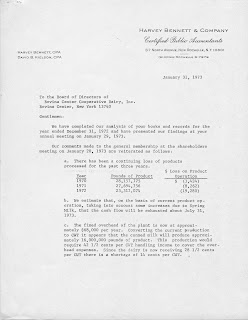