This Day in Bovina for August 2019

Here is the compilation of the Town of Bovina Historian Facebook entries for August 2019:

112 years ago today, on August 1, 1907, Rev. William Robb was married to Orlena Russell, the daughter of James A. Russell. A few months before her marriage Orlena had been teaching in Apache, Oklahoma at an Indian missionary school. A few months after the wedding the Robbs sailed for China as missionaries, arriving Tak Hong Chau, South China in December 1907. Rev. Robb would die in China in 1929. Orlena came back to the United States and settled in Walton for several years. She died in 1982 in Florida.

Seventy years ago today, on August 2, 1949, Walter G. Coulter and Arnold Van Dusen were seriously injured while working on the home of Arch Hunter in Bovina Center. While on the scaffold, it broke, tossing both men several feet to rough and rocky ground. Coulter got the worse of it, with a dislocated shoulder, and a sprained and bruised back. Van Dusen broke his wrist. Both men were taken by ambulance to Delhi. Coulter spent a few days in the hospital before returning home.

Thirty-three years ago today, on August 3, 1986, Evelyn Campbell died at the age of 89. Born in 1897, she was the daughter of John M. Campbell and his wife Nancy Smith, growing up on Pink Street in Bovina. Her sister was Eleanor Worden, who was married to LeRoy Worden.

168 years ago today, August 4, 1851, James Russell, Jr. died.  Born in Loudon, Ayrshire, Scotland in 1790, he was the son of William Russell and Janet Pumphrey.  He married Margaret Bryce in Stamford in 1814.  They settled in Bovina, having 13 children. James was the great great grandfather of Cecil Russell.

Fifty-four years ago, the August 5, 1965 Bovina column in the Delaware Republican Express reported that "Summer boarding houses are filling up very fast during the past week and several boarding homes are running full capacity."

130 years ago today, on August 6, 1889, John Downie died in Norfolk, Virginia. Born in Lanarkshire, Scotland in 1819, he came to Bovina and for a number of years was a shoemaker in the then hamlet of Brushland, living in the house now occupied by the Foster family (formerly owned by Ken and Barbara Brown). He was married twice, first to Elizabeth Thompson, who died in 1862 after having five children, and later to Mary Ann Scott, who survived him, dying in 1900. The family left Bovina by 1880, spending some time in Iowa before moving to Virginia.

Ninety-six years ago today, the August 7, 1923 issue of the Glimmerglass Daily (Cooperstown) reported that "G. D. Miller, who is a resident of Bovina Center claims and probably with justice, that he is the oldest dealer in hides in this section of the state. He has been in the business for 65 years."

Seventy-nine years ago, the August 8, 1940 Bovina column of the Delaware Republican reported that "Charles A. McPherson, who has been a patient at the Bassett Hospital in Cooperstown more than a year and a half returned to his home here this week. Mr. MacPherson suffered injuries to his back from a fall in the haymow from which he is not entirely recovered. His many friends are glad that he is again able to return home." McPherson, born in 1873, would survive another nine years as a semi-invalid.

Fifty-two years ago today, in the early morning hours of August 9, 1967, Vera Storie died. Her death was unexpected. As the Delaware Republican later reported, "Mrs. Storie had phoned her sister-in-law, Mrs. [Fletcher] Davidson the previous evening to say that she was not feeling well, but it was a casual remark made during the conversation." It was noted that she had had friends visit her that afternoon.

145 years ago today, on August 10. 1874, Wilhelmina B. Cooke was born, the daughter of William Cooke and Ellen Knox Laidlaw. Better known as Mina (pronounced Minie), she married Walter Wilson and had three children. For more about Mina, look at the Bovina NY History blog for November 11, 2013: http://bovinanyhistory.blogspot.com/2013/11/bovinas-first-female-office-holder.html

108 years ago today, the August 11, 1911 Bovina column in the Andes Recorder reported that "The town's traction engine was put on the work of putting the highway in shape between the Rockafeller place and Eugene Storie's." This highway is the current Reagan Road.

Fifty-five years ago today, on August 12, 1964, Agnes Draffen died. Born in 1872, my "Aunt Aggie" was the daughter of Alexander Burns and Nancy Miller. She married David Draffen in 1895. Here is her obituary, as published in the August 20, 1964 Delaware Republican Express.

Sixty-seven years ago today, on August 13, 1952, as later reported in the Bovina column of the Catskill Mountain News, "About 40 ladies, including her Sunday school class, came on Wednesday … to wish Mrs. Elizabeth Blair happy birthday. The occasion was her 85th birthday."

123 years ago today, on August 14, 1896, as later reported in the Bovina column of the Andes Recorder, "John, the three-year-old son of Mr. and Mrs. Douglas Davidson, died. The funeral was held Monday, Rev. Thomas Park preached the sermon from 2d Timothy 4:7,8." As well as his parents, John was survived by his sister Vera and his brother Fletcher.

Margaret McDonald was born one hundred and ninety-six years ago on August 15, 1823 in Dundee, Scotland.  She was the daughter of Henry McDonald and Margaret Donald.  The family emigrated to Bovina where Margaret would marry William Archibald in 1845.  They would take over the McDonald family farm at the Butt End about ten years later.  Widowed in 1883, Margaret died in 1907 at the age of 84 and is buried in Bovina. 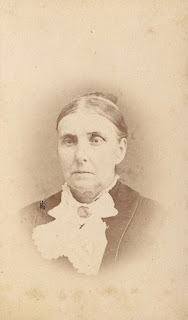 108 years ago today, on August 16, 1911 the Bovina Board of Health met concerning "certain conditions caused by a drain near the well at the hotel." The board served notice and "suggested a cesspool." it is not clear which hotel this might have been.

Sixty-seven years ago today, on August 17, 1952, as later reported in the Catskill Mountain News Bovina column, "June Reinertsen, daughter of Mr. and Mrs. Leif Reinertsen, was given a party Sunday in honor of her 11th birthday. Thirty-two were present. Out of town guests were Mr. and Mrs. Frank Swantak of South Kortright and Linden Kelly of Hamden. There were many gifts, best of eats, a nice time and many good wishes to a nice girl."

140 years ago today, on August 18, 1879, Alexander McEachron died at the age of 83. As later reported in the Delaware Gazette, "[The] Decease[d] was one of the oldest residents of Bovina, having lived on the farm where he died for upward of fifty years." McEachron lived on what is now the home of the late Howard and Laura LaFever.

Ninety years ago today, on August 19, 1929, the funeral of Mrs. Nettie Hilson took place at the home of her daughter, Mrs. Fred Henderson. Mrs. Hilson had broken her hip a few weeks previously and had a heart attack on August 9. She passed away a few days later at the age of 87.

Seventy-seven years ago today, the August 20, 1942 Delaware Republican-Express reported in its Bovina Center column: "Miss Ida Fancher of Andes was an overnight guest Sunday at the home of her grandfather, George H. Miller, on her way back to Sidney where she is employed at the Scintilla plant."

136 years ago, the August 21, 1883 Bovina column in the Stamford Mirror reported that "An artist from New York is at work on a piece of painting on canvas for the U.P. Church, of Bovina." What canvas this was cannot now be determined.

170 years ago today, on August 22, 1849, the Bovina Methodist Church's new church building was dedicated. The building, located across from where the community hall is now, cost $1,397.50 to build. The trustees at the time of the building’s completion were James Seacord, Thomas W. Dennis, Sylvenus Bramley, Alphonso Lee and Edward McKenzie. The dedication took place though not without incident. The pastor of the Bovina Associate Presbyterian Church, Reverend John Graham, received a notice about the dedication and made his feelings known in no uncertain terms from his pulpit. He condemned the consecrating of churches as “heathenish and popish in its origin.” In his autobiography, he proudly noted that “some diseases need strong medicine at the beginning to prevent them spreading and injuring the whole system; and which, if used in time, prevents much trouble and perplexity afterward.”

Seventy-four years ago today, on August 23, 1945, a victory dance was held in the parish hall of St. James' Church at Lake Delaware. As later reported in the Delaware Republican Express, "…a pleasant time was had by all. Music was by Mead's orchestra."

134 years ago, the August 25, 1885 issue of the Stamford Mirror had the following item in its Bovina column: "Our new postmaster has broken ground near his residence in Brushland for the new post-office building and expects to have it ready for business about October 1st." I am not 100% where this was built, or if it was. It may have been the small garage attached to the former Clayton Thomas residence, now the Tom Hetterich home. The postmaster was William McCune, who had just been appointed the month before. He was postmaster for four years.

Seventy-four years ago today, on August 26, 1945, as later reported in the Delaware Republican Express, "A collision of the cars of John Lee and Almiron Goss occurred at the Lake Delaware bridge….Both cars were badly damaged but none of the occupants were seriously hurt. The Goss car, driving by his brother-in-law, Donald Gemmel who was accompanied by Mrs. Goss and niece, Miss Mae Sitts. The Lee car was driven by Mrs. John Lee, accompanied by her aged aunt, Mrs. Birdsall, her sister-in-law, Mrs. James Meighan and Miss Lura Fisk. All were badly shaken up."

Ninety-four years ago today, on August 27, 1925, the Bovina town picnic took place. As later reported in the Andes Recorder, "Addresses were made by Attorney Ernest Bergman, of New York, and H.W. Harper of Walton."

129 years ago today, on August 28, 1890, Nancy Miller Burns, wife of Alexander Burns, gave birth to their second son. He died only three days later and was never named.

Forty-nine years ago today, on August 29, 1970, the Town of Bovina celebrated its Sesquicentennial - its 150th birthday. We're less than a year from celebrating Bovina's Bicentennial! So get ready! August 1-2, 2020.

122 years ago today, on August 30, 1897, Mary Ann Gladstone died in Andes at the home of her brother, Robert. She was born in Bovina in 1856, the daughter of Robert Gladstone and Jane Miller. 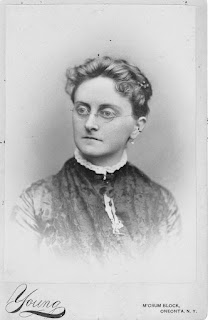 137 years ago today, on August 31, 1882, as later reported in the Delaware Gazette, "Six or seven hundred people were present at the grand picnic in Bovina last Thursday. The Stamford Cornet Band furnished the music. The Bovina ladies supplied an abundance of excellent refreshments, and Russell Frost, of Delhi, and Rev. Mr. Hawk, of Pepacton, delivered the addresses. Everything passed off in a most enjoyable manner and everyone seemed desirous to congratulate those who had the management in charge, and to wish most heartily that they may enjoy a repetition of the day's pleasure at some future time."
Posted by Bovina Historian at 8:00 AM