This Day in Bovina for February 2019

Ninety-eight years ago today, on February 1, 1921, as later reported in the Otsego Farmer, "Everett Palmateer of Andes and Fletcher Davidson of Bovina had the unusual experience of being projected through the top of an enclosed car last Tuesday afternoon. The men were on their way to Bovina in the enclosed Ford car of Mr. Palmateer, with Mr. Davidson driving. The road, was slippery and when they reached the top of the hill at Lake Mohican on the Thos. Mabon farm, the rear of the car skidded and swung across the road and as it turned over on its side the men were shot through the top, tearing off the entire top of the car."


Ninety-one years ago today, on February 2, 1928, an alert Ruth Coulter saw a light in the village school building and discovered that the building was on fire.  As later reported in the Andes Recorder, "The fire department was called out and the fire was put out by the use of chemicals and very little water with only slight damage. It started from the furnace."  The building concerned is now the Bovina Public Library.  Ruth Coulter later married Bill Parsons.


Seventy-five years ago today, the Bovina Center column of the February 3, 1944 Delaware Republican-Express reported that "the Harvey Burgins have a new floor in their dining room." The same column also reported that "Mrs. Lillian Hafele is now living in her new home, the former Jennie Archibald house."


Fifty-four years ago today, the February 4, 1965 issue of the Delaware Republican-Express reported in its Bovina column "Due to the closing of the New Kingston Creamery, four dairies have already brought their milk to the Bovina Creamery, Marvin Hosier, Bill Elliott, David Condon and a Mr. Walters…."


Two farm related items from the Andes Recorder appeared 122 years ago today in its Bovina column for February 5, 1897:


"Cows averaged $22.80 at Thomas Gordon’s auction last week Thursday, in Glenburnie, and everything else sold well.


"Many think that the grasshoppers working on the hay and straw the past season, is the cause of so much sickness among cows and horses here this winter."


113 years ago today, on February 6, 1906, as later reported in the Catskill Mountain News, the temperature in Bovina was "twenty-four degrees below zero … the backbone of winter seems to be strengthened instead of weakened."


117 years ago, in its February 7, 1902 edition, the Andes Recorder reported on a letter from a Bovina resident who was in Seattle:  "Writing from Seattle, Miss Jennie J. Campbell, who recently went from this place, likes the place very much and her letter, written about the middle of January, states that the climate is mild and at that time the weather was like our April.  Lawns were green, and roses and violets were in bloom."


Ninety-six years ago today, on February 9, 1923, as reported by the Andes Recorder, "Mrs. Fred Johnson committed suicide at her home in Bovina Center by cutting her throat with a razor…"  Born of Lydia Thomson, the Recorder noted that the cause of her suicide "was probably over wrought nerves." The newspaper noted that her husband had been ill and she was having her own health problems. A niece had come to help with the care of Mr. Johnson, so Mrs. Johnson and her sister went up to bed. Her sister, Mrs. James Russell, heard her sister get up in the night but didn't think much about it and went back to sleep. When she couldn't find her the next morning, a search was instigated in the house. Mrs. Johnson was found at the top of the stairs into the attic, still holding the razor with which she did the deed. "The funeral was held Monday from the Church of the Covenanters, Rev. F.N. Crawford officiating." Mr. Johnson passed away in January of 1925.


Ninety-one years ago, the Andes Recorder of February 10, 1928 reported that "Courtney Currie was kept from his work at the creamery a few days the past week by boils."


133 years ago today, on February 11, 1886, as later reported in the Stamford Mirror, "The household goods of John Shanks, wagon maker, late of New Kingston, arrived in Brushland on Thursday, the 11th inst., and he will occupy the rooms, and carry on the business, in the shop lately occupied by J. Dietrich."


117 years ago today, on February 12, 1902, Fort-nightly Club lecture course hosted a lecture by Professor William Elliott Travis of Cornell University at Strangeway’s Hall. His subject was “Facts Fun and Fancy Concerning the Japanese.”


Fifty-four years ago today, on February 13, 1965, as later reported in the Bovina column of the Delaware Republican Express, "Mr. and Mrs. Fletcher Davidson and Mrs. William Storie attended the meeting of the Delaware County Historical Association at Roxbury…On their way home they called on Mr. and Mrs. Frank Miller at Stamford and found them in good health." The Millers used to live in Bovina in what is known as the Charlie and Eva McIntosh house.


131 years ago today, the Bovina column in the February 14, 1888 Stamford Mirror reported "A spelling school in the Pink Street District…attracted a large number of the young people, one sleigh load containing 19 persons going up form Bovina Center." 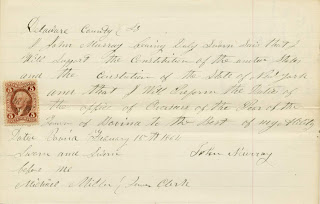 Ninety-seven years ago today, on February 16, 1922, Calvin Russell's team of horses got away from him. The Andes Recorder reported that "The team of Calvin Russell took fright at the creamery Thursday morning and had a lively run. Coming onto Main street the team ran in at the Hastings feed store and onto the flat above the new street. Continuing up the flat they went over the wall into a rocky pasture lot of Fred Bramley and were not caught until they reached Bramley’s. No damage was done and not even the milk cans were thrown out. How they avoided all the rocks is a miracle."


108 years ago today, on February 17, 1911, as later reported in the Andes Recorder, "The infant child of Mr. and Mrs. Robert Foreman, aged three months and four days, died with pneumonia... Rev. Robb officiated at the funeral Monday.  Child was their only daughter, Mary Elizabeth." The Foremans had three sons at the time of their daughter's death and would have two more after.


This license photograph of Cliff Hall was taken in February 1950 by Bob Wyer. Cliff was born in 1921 in Walton. It was at a dance in Walton that he met Gertrude Kittle. They were married and spent some time in San Francisco where Cliff was stationed in the Navy during World War II. After the war, they came to Bovina to farm on Coulter Brook Road. In the 1950s they started their farm vacation business, Elms Farms. They retired from that and had a home in Bovina Center while spending winters in Florida. Cliff died in 1988. Photograph courtesy of the Delaware County Historical Association. 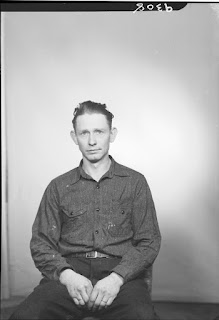 Eighty-nine years ago today, the Bovina column of the February 19, 1930 Delaware Republican reported "The two large smoke stacks on the Dry Milk Plant were raised….George Flowers of Hobart was in charge. They are putting in a new dry pan this week." Here's an undated photo of the dry milk plant showing the smoke stacks. The plant was behind the Bovina Center Creamery. 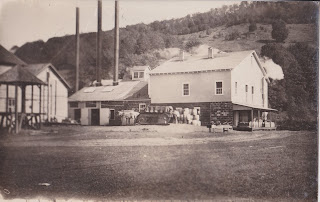 117 years ago this afternoon, on February 20, 1902, as later reported in the Andes Recorder, "the smoke house of G.D. Miller caught fire, scorching eight hams he had curing there.  It was believed that the building caught fire from some ashes which Mr. Miller had taken from the stove that morning and stored there."


166 years ago today, on February 21, 1853, Mary McCune Douglas gave birth to a son, John McCune Douglas. His father was James R. Douglas. John would die at the age of 7 years and 26 days in 1860. Mary Douglas was James' second wife. His first wife, Nancy, gave birth to one daughter and died a few months later. This daughter would die two months before her half-brother John. James and Mary would have one more child a year after the death of their son. The daughter would die at the age of 15.


Seventy-four years ago today, on February 22, 1945, Ethel DeSilva sent this V Postcard to her friend Marjorie Russell in Bovina. Ethel had enlisted in December 1944 as a WAVE in the Navy. She was discharged in November 1945. Ethel was the daughter of Harvey and Elizabeth Burgin (and a first cousin of Cliff Burgin). She was married to Fred DeSilva, who also served in the Second World War. Fred died in 1976, Ethel in 1986. The postcard is signed 'Pete,' which was Mrs. DeSilva's nickname. 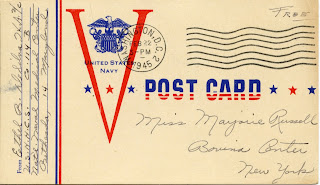 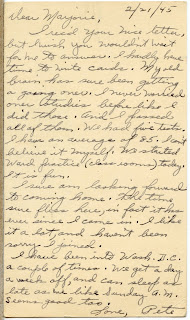 127 years ago today, February 23, 1892, Ralph Miller Barnhart was born, the son of Jeremy Barnhart and Kate Miller.  Ralph was married and widowed three times and would live to be 96, dying on Christmas Day, 1988. He would have one son, Donald, from his first marriage to Anna Ruland. He is buried in Bovina. Ralph was my great-uncle. Here he is with his sisters Edith and Anna Bell (my grandmother). 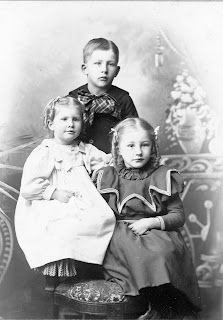 134 years ago today, the February 24, 1885 Stamford Mirror had this item about the recent town election. These elections took place in February until the early 20th century.

199 years ago today on February 25, 1820, the New York State legislature passed an act creating the Town of Bovina. This means we are only a year away from Bovina's Bicentennial.


Seventy-nine years ago today, on February 26, 1940, Mrs. Charles F. McPherson died.  The Delaware Republican had reported in its February 22 issue that "Mrs. Charles F. McPherson was taken to the hospital at Delhi….for treatment by Dr. Brooks."  The newspaper reported her death a week later. Mrs. McPherson was born Carrie Eliza Miller, daughter of William R. Miller and Mary G. Laing. Carrie was 58 at her death. Her husband survived her by over 20 years, dying in 1963.


124 years ago today, on February 27, 1895, Jennie E. Hilson, the daughter of Thomas and Jenneatte Orr Stott Hilson was married to Lewis W. Cooper. Lewis was from Massachusetts. They would have nine children.  Here is the invitation to the wedding. 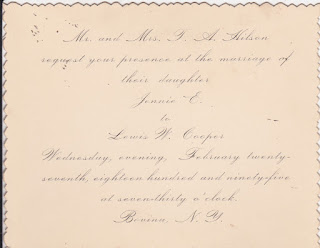 107 years ago today, this item appeared in the February 28, 1912 Delaware Gazette: "James C. Mabon and John Whitson have sold their farms in southern Bovina to Robert L. Gerry. The options were given several days ago and the writings will be drawn Friday. Both Mabon and Whitson can, if they choose, remain on the farms until September. It is stated that Mr. Mabon receives $15,000 and Mr. Whitson $5,250 for their respective farms. Mr. Mabon has his eye on a small place at East Delhi It is understood that Mr. Gerry will erect a large summer home at the heights of the Mabon farm." This is where in 1915 Gerry built Aknusti.
Posted by Bovina Historian at 8:00 AM