Who is E. Thomson?

Gary Manning recently shared with me a picture that was found by his wife (and my cousin) Joyce Manning. It was found behind a framed print that was in Joyce's family. The small signature in the corner says E. Thomson. 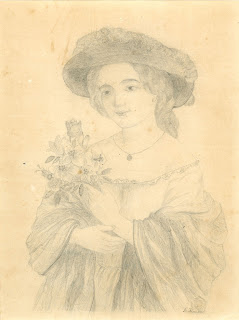 Behind the picture was this information:
"To My Sister
"Tis not the value of the gift,
That friendship's hand may tender,
Tis not a thing's intrinsic worth,
Though gems of rarest splendor;
That call the heart's best gratitude
Or wakes a deep emotion." 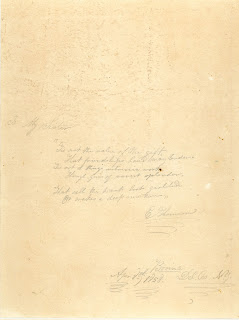 I have not succeeded yet in determining who this is. The first name probably is Elizabeth, but that doesn't help much, since there are several Elizabeths. I looked in the 1860 census for any Elizabeth Thompsons/Thomsons and there were five in Bovina. I looked to see if any of these Elizabeths had sisters alive in 1858 and all five did. And on top of that I found two Elizas and an Ellen.

The Elizabeths range from 63 year old Elizabeth Thomson, born Elizabeth Scott to an Elizabeth who was 17, the daughter of William Thompson and Amelia Lyle. This Elizabeth had a sister Mary. If the artist is this Elizabeth, she would have been 15 years old. She was married in 1873 to Adam Scott and died in 1922 when she was 80.

The second Elizabeth in the 1860 census was Elizabeth J. Thompson. She was the daughter of John R. Thomson and Mary McFarland and had a sister Eleanor. In 1860, she and her parents were living with her grandfather, Andrew Thompson. This Elizabeth died in 1862.

There's a third Elizabeth who shows up but information about her is harder to find. She appears to be the daughter of James and Elizabeth Scott Thomson. And she had at least two sisters.

There's an Elizabeth Thomson who was born in 1806, the daughter of James Thompson. She married George Thomson.

There also was an Eliza Thompson, who was born Eliza Murray in 1829. She married David Lowe Thompson in 1854 and had several sisters. She was the daughter of John Murray and Jennet Scott.

If anyone recognizes anything about this picture or the handwriting, please contact me. I'd love to figure out the identify of "E. Thomson."