This Day in Bovina for February 2018

Sixty-seven years ago today, the Bovina in the February 1, 1951 Delaware Republican-Express, reported that "Lauren Monroe, who is attending Westminster College, is home for the mid-term holiday." The same item also reported that Leonard Cairns is also home from Canterbury College, Indiana.

Ninety-nine years ago on February 3, 1919, as later reported in the Andes Recorder, "Mrs. Mary Swart, who has been in poor health for some time, suffered a shock about 5 o’clock Tuesday morning, at the home of her niece, Mrs. William Crosier, and lies in precarious condition." She died a few days later on February 8.

119 years ago, on February 4, 1899, Mrs. Violet Johnson died suddenly at her home in the Mountain Brook area while on the telephone. As later reported in the Andes Recorder, “John Hewitt was talking to her during the forenoon and all at once he noticed something unusual but supposed something was wrong with the instrument. When her son, Thomas, went into the house for dinner he found her laying on the floor dead.” Violet was born in Scotland in 1834, the daughter of Thomas and Helen Hamilton. She married Thomas H. Johnston and had four children. She was survived by two of her sons, “who are proprietors of the Woolen Mills.”

Seventy-six years ago today, this short Bovina Centre column from the Delaware Republican appeared in its February 5, 1942 issue. 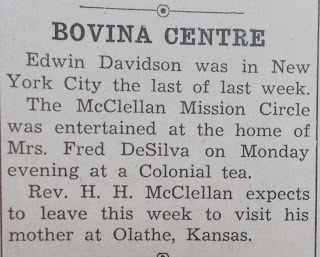 115 years ago today, the February 6, 1903 Andes Recorder Bovina correspondent reported a rather horrible incident involving a former Bovina resident and a mad dog: "Last week word was received at this place that James. L. Ormiston and his two daughters, who resides at Wilmington, Delaware, had been bitten by a mad dog. The dog, which belonged to a neighbor, attacked the youngest daughter, aged about seven years, and an older sister went to her assistance, and both were severely bitten when Mr. Ormiston came to their aid. He succeeded in chocking the dog to death, but not until it had bitten off one of his fingers. His brother, Dr. Ormiston of Delhi, who went to treat them, reports that no hydrophobia symptoms have developed and it is thought that they will come out all right."

Sixty-six years ago today, on February 7, 1952, the Delaware Republican Express reported in its Bovina column that Mrs. Bernard Perry and Mrs. Boyce Rossman attended a Stanley Hostess party at the home of Mrs. James Kinsey in Bloomville."

117 years ago today, the Garnett (Kansas) Eagle, in its February 8, 1901 issue, reported on a call made by the congregation of the U.P. Church in that town. The report, later published in the Andes Recorder under the heading "A Bovina Boy,” went on to state that "At a congregational meeting of the United Presbyterian Church last Tuesday afternoon, it was unanimously agreed to call the Rev. W.T. Mabon to the pastorate of the church here.  Rev. Mabon has addressed this congregation a few times and the members were delighted with him.  He is a young man just graduated from the seminary at Xenia, Ohio.  His home is in Bovina Delaware County, N.Y.  It is understood that Rev. Mabon will accept the call. He will locate in Garnet in about a month."

112 years ago, on February 9, 1906, Dr. L.L. Van Slyke, of the [New York] State [Agricultural] Experiment Station, Geneva, NY lectured in Strangeway’s Hall.  His topic was the “Utilization of Barnyard Waste.”  The Andes Recorder, in promoting the lecture, reported that “The Doctor is under the Bureau of Farmers’ Institutes of the State Agricultural Department.  He will tell how to enlarge the bank account.  He is an interesting speaker and his address will both please and profit.” Dr. Van Slyke worked for the Geneva station for 38 years, retiring in 1929.

Sixty-three years ago today, on February 10, 1955, Mrs. Gertrude M. Parmenter passed away at the Delhi hospital after a five week stay. As later reported in the Catskill Mountain News, she was born in 1905 and "since living in Bovina has run a successful business known as the Bovina Lodge restaurant." She was the wife of Howard Parmenter. 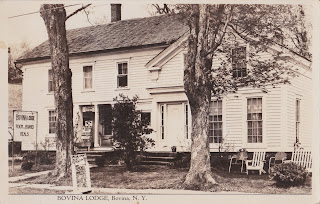 Seventy-five years ago today, the Bovina column of the February 11, 1943 Delaware Republican-Express reported that "Clarence Burns has bought the William Stock farm and has already taken possession."

129 years ago, on February 12, 1889, the Stamford Mirror reported that "Bovina people want a new U.P. church, just like the one recently dedicated at South Kortright. They are going to solicit about $3,500, and fix up the old church with new-fashioned notions. Let them go ahead." The renovations were carried out in the church that fall, making it look very much like it does today.

Ninety-six years ago, on February 13, 1922, the Bovina Town Board met "to make arrangements for building a new bridge to take the place of the stone arch bridge at the former Strangeway store in Bovina Center."  As later reported in the Andes Recorder, "The present structure was built about 1858, by James R. Scott, who furnished and hauled the stone and built the bridge for $100.  The highway commissioner was severely criticized for his extravagance, it being alleged that he would bankrupt the town."

Ninety years ago, on February 14, 1928, "Bovina experienced a very high-water Tuesday night.  Streams were over the banks and large cakes of ice were carried onto the highway below the Center.  Cellars were also filled, water ran through the barn of Lester Hoy on the former John Hastings farm."

106 years ago today, on February 15, 1912, Elmer Gladstone, son of George Gladstone, was operated on for chronic appendicitis. He came through the operation fine. In 1925 he was attacked by a bull on the family farm. He survived that too and died when he was 81 in 1956.

A heavy snowfall ninety-eight years ago today, February 16, 1920, prevented the delivery of the mail. It did make it through the next day. Another storm about a month later would prevent mail delivery on March 12 and 13.

131 years ago today, on February 17, 1887, as later reported in the Stamford Mirror, "A large and interesting meeting of the Delaware Co. Dairymens Association, was held in Hastings Hall…Many prominent dairymen from other parts of the county were present and took part in the discussions."

Commodore E.T. Gerry died in New York City ninety-two years ago today, February 18, 1927.  Grandson of a signer of the Declaration of Independence, he spent many summers at his home on Lake Delaware. His son Robert and daughter Angelica each later built their own homes at the lake.

The February 21, 1902 issue of the Andes Recorder (116 years ago today) reported in its Bovina column that "Henry Hogaboom, formerly of this town, is now at the Military Home at Dayton, Ohio." Hogaboom was a Civil War veteran. Born in Sullivan County, he moved to Bovina as a boy and settled in Lake Delaware after the war until his move to the soldier's home. He lived there 19 years until his death there in 1921. His body was brought back to Bovina for burial.

138 years ago today, on February 22, 1880, Walter Thompson died. As later reported in the Bovina column of the Stamford Mirror, Thompson was a blacksmith in Bovina. The paper noted that "Mr. Thompson had been in poor health for some time, but was not confined to bed. On the morning of his death not feeling as well as usual a physician was sent for, but death ensued about half an hour after the doctor's arrival. The remains were taken to DeLancey for interment."

Seventy-seven years ago today on February 23, 1941, as later reported in the Delaware Republican, "Mrs. W.J. Storie gave a ten-cent tea at her home for the benefit of the A.W.V.S (American Women's Voluntary Services)…"

122 years ago, on February 24, 1896, a fire that happened during evening church services caused a ruckus. The report of the fire was in the Andes Recorder: "About 8 o’clock Monday evening [Feb 24] while the people were in the United Presbyterian church attending services, the startling cry of fire ran through the church. In an instant all was excitement and a rush was made for the door and the street was black with people hurrying toward the store of Hilson & Blair where the fire had been discovered. The fire had started in the rear of the store beneath the floor and within a few feet of the oil tank. Plenty of help was soon on hand and went to work carrying water in pails, tubs and whatever would hold water. Boards were torn off and the water poured on the fire and it was soon extinguished without much damage being done. No cause can be given for the fire as fire has never been kept in that part of the building. If the fire had gained a little more headway before it was discovered, or had occurred a few hours later nothing could have saved the store, as we have no way to extinguish a fire once fully started."

198 years ago today on February 25, 1820, the New York State legislature passed an act creating the Town of Bovina.

Eighty-eight years ago today, the Bovina column of the February 26, 1930 Delaware Republican reported that "T.C. Strangway has not been so well for a little while. Dr. Thomson was there on Saturday to bleed him. Mr. Strangeway had this done a year ago and thought it a relief." He survived this treatment a little over two years, dying in July 1932.

The Andes Recorder from 139 years ago today, February 27, 1879, reported the sad news that "Henry, son of Wm. D. Thompson, of Brushland, who met with an accident recently, which was supposed to have ruptured one of his kidneys, is not better, and when last heard from he was still failing. He is about fifteen years of age, and an only child." Henry, born in 1862, had had three siblings, but they had all died as children, two before his birth. Happily, Henry did recover from this accident and was married four years later. He died in 1930, leaving a widow and three children.

Ninety-five years ago, as later reported in the Andes Recorder, “The road from Bovina to Delhi was opened up Wednesday [February 28, 1923] for trucks, after having been closed for anything but sleighs for about two weeks.”
Posted by Bovina Historian at 8:00 AM