This Day in Bovina for September

132 years ago today, the September 1, 1885 Stamford Mirror reported under its "Bovina Items" column the following: "It is reported that James Happy, the popular sales man for Thomas Johnson's woolen factory, sold 58 readymade woolen shirts in one week."

Seventy-four years ago today, the September 2, 1943 Delaware Republican reported in its Bovina column that "Warren Sarle of Chicago is spending a few days with his father, Dr. W.C. Sarle, who recently submitted to an operation for cataracts." Dr. Sarle had been the doctor in Bovina since 1927. He left Bovina not long after the surgery and died in 1946.

Ninety years ago today, on September 3, 1927, Bovina had a successful clam bake "despite the downpour of rain." About 1000 people attended the event. As later reported in the Andes Recorder, "…tables had been set in the Miller orchard below the church and wires strung for electric lights but there was no letup in the rain and the tables had to be moved to the basement of the church and the crowd fed there, except for a few who were fed under a tent." The Miller orchard is the yard behind what is now Amy Burns and Tom Lamport's home across from Russell's Store.

117 years ago today, on September 4, 1900, Fred Bramley, of Bovina, and Lucy Jackson, of Andes, were married at Delhi. The Andes Recorder noted that the "marriage occurred just ten months to the day after the death of his first wife." His first wife, Margaret, died in November 1899. They had been married for seven years and had two children, both who died young. His marriage to Lucy lasted 14 years until her death in 1914. They would have five children. Fred would marry a third time, but waited nine years before marrying Christina Close in 1923. He would be widowed a third time when she died in 1943. He died the following year.

175 years ago today, September 5, 1842, Bovina resident Henry Luddington was drowned in the Delaware River near Delhi at the age of 59.  He is buried in the Brush Cemetery in the Bovina Center hamlet.

On September 6, 1854, 163 years ago today, William Augustus Bramley, the five-year-old son of William and Angeline (Burdick) Bramley died.  He was buried in the Bovina Cemetery.

115 years ago today, on September 7, 1902, Alex Burns, a native of Bovina, died at Hill City, Kansas, after an illness of three days.  He was 78.  His body was brought back to South Kortright for burial.  This is not the Alex Burns who lived on what is now the Goggins place on Crescent Valley Road.  How he is related to the rest of the Burns family is not clear.

Ninety-three years ago today, September 8, 1924, Hillis's garage in Bovina submitted this bill for $10.45 to the Town of Bovina for a tire and tube.  This garage later became Thomas's garage and is now owned by Tom Hetterich.

Fifty-two years ago today, the Bovina column in the September 9, 1965 Delaware Republican-Express reported that "Mr. and Mrs. Robert Burns and older daughter, Amy, have been on a seashore vacation and other places of interest. Mrs. Jack Burns kept the baby in their absence." The baby was Colleen.

128 years ago today, on September 10, 1889, Jennie Cairns, daughter of James and Annie (Pierce) Cairns, was born.  She would later marry William Elliott.  Jennie passed away in April 1967 and is buried in the Bovina Cemetery.

Roxanna A. Hobbie, the three-year-old daughter of Joshua Knapp Hobbie and his wife Sarah, died 182 years today on September 11, 1835.  She is buried in the Bovina Cemetery.

Ninety-two years ago today, on September 12, 1925, as later reported in the Andes Recorder, “A heavy storm of rain accompanied by a high wind, passed over Bovina …and numerous trees were blown down.”

Eighty-nine years ago today, the September 13, 1928 Stamford Mirror reported that "a brother and sister of Misses Kate and Freda Muller, who have been west for a number of years are visiting at the Muller House."  The Andes Recorder provided a bit more information; "Werner Muller of DesMoines, Iowa, and his sister, Mrs. Emma Roper, of Hayes, Kansas, are in visiting their sisters, Misses Kate and Freda Muller.See this Bovina NY History blog entry for more information on the Muellers:  http://bovinanyhistory.blogspot.com/2013/01/stories-from-bovina-cemeteries-muller.html

Ninety-eight years ago today, on September 14, 1919, the new can washer installed at the Dry Milk plant had a malfunction when "seven cans got stuck in the washer and some difficulty was experienced in getting them out."

On September 15, 1858, 159 years ago today, Rhoda Davis died in Andes.  As reported in the Bloomville Mirror on September 21, Mrs. Davis was the widow of Samuel.  She was 88 years old at the time of her death.  The paper went on to report that "She was one among first settlers in Bovina.  Her exemplary life endeared her to all who had the pleasure of her acquaintance." Her maiden name was Rhoda Hilton. She was born in Connecticut. I have not been able to determine who her parents were.

Ninety-six years ago today, September 16, 1921, as later reported in the Andes Recorder, "The body of James D. Calhoun, who was killed in France during the world war, arrived here this week and burial was made Wednesday in Bovina Center cemetery.  Members of Calhoun post of Andes, acted as bearers." Calhoun died in October 1918.  He left a widow, Anna Bell Barnhart Calhoun. In 1923, Anna Bell would marry my grandfather, Benson LaFever.

Forty-nine years ago today, the September 17, 1968 Oneonta Star included this photo and caption of the new barn being built by Jack and Bob Burns. The barn still is in use by Dominic and Laurie Gullow. 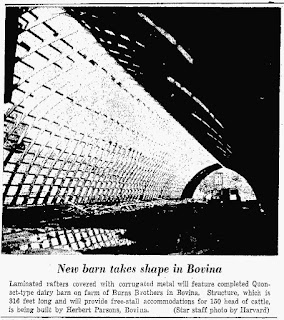 112 years ago today, on September 18, 1905, Eugene Porter, Commissioner of the New York State Department of Health wrote to Thomas Gordon, Secretary of the Bovina Board of Health, concerning a change in Bovina's health officer. This is the letter. 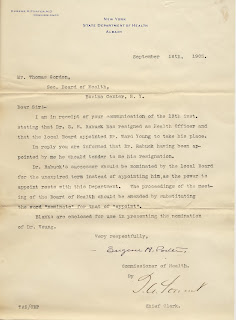 116 years ago today, on September 19, 1901, a memorial service was held at the Bovina United Presbyterian church for recently assassinated U.S. President William McKinley. As later reported in the Andes Recorder, the service was presided over by the church's pastor, Rev. Samson. "Charles Arbuckle read the scripture lesson; Margaret Swart read the President's proclamation, and addresses were made by Rev. Slater, R.E. Bergman and Rev. Samson."

Sixty-three years ago today, on September 21, 1954, Celia Coulter left Bovina for Albany to start attending the library school at the State College.

101 years ago today, September 22, 1916, the J.W. Coulter Hose Company had a ball game, a Chicken Pie supper and an entertainment in the evening to raise funds.

151 years ago today, on September 24, 1866, Elizabeth Richardson was born, the daughter of William and Isabella (Sloan) Richardson.  Elizabeth would later marry John Irvine and was the mother of Isabell Russell and her four brothers, Lloyd, William, Lester and Clifton. Elizabeth died in July 1940.

Eliza Atikin, the 31-year-old wife of David Atkin, died 173 years ago today on September 26, 1844.  She is buried in the Old Reformed Presbyterian Church cemetery.

124 years ago today, the September 27, 1893 issue of the Delaware Gazette reported that "Mr. Andrew Doig has bought the store and stock of Thomas E. Hastings, of Bovina Centre, and will continue the business at that place." This is now Russell's Store.

106 years ago today, the September 29, 1911 Andes Recorder reported successful eye surgery for Miss Jennie E. Miller of Bovina Center, "who has for some time been blind from cataracts growing on both eyes…" The paper reported that she had the operation in New York city for the removal of the cataract on one eye. "The operation was successful and she can now see."

122 years ago today, on September 30, 1895, people around Bovina woke up to snow covering Bramley mountain and Mount Pisgah.
Posted by Bovina Historian at 8:00 AM