In preparation for my November visit to the Scottish Borders of Scotland, I thought I’d mention a few of the Bovina Families who came from there. I wrote about the Borders last September during a previous visit there. Go to http://bovinanyhistory.blogspot.com/2013/09/the-scottish-borders-and-connection-to.html to see that entry.

I’ve already written about the Coulter family in a previous blog entry. Go to October 17, 2010 blog entry for information about this family (http://bovinanyhistory.blogspot.com/2010/10/bovina-pioneers-francis-and-nancy.html).

Robert Gladstone, who was born in 1777 in Teviothead-Glednest, Scotland, married Ann Ray around 1802 and came to Bovina in 1817. They had eight children. The Gladstone family were members of the Associate Presbyterian Church but had a falling out with the church when dancing was held at their son Walter’s marriage to Isabella Biggar in 1834 (more information about this incident can be found in this blog’s entry for October 23, 2010 - http://bovinanyhistory.blogspot.com/2010/10/gladstones-and-biggars-clash-with.html).

The Hilson family’s roots go back to one John Hilson, who was born in Scotland in 1827, the son of Alexander and Elizabeth (Nesbit) Hilson. The names John and Alexander would continue through their descendants to the present day. The Hilsons came to Bovina relatively late in its history. John Hilson emigrated in 1850, landing in New York and coming directly to Bovina to settle. He farmed for a number of years before becoming a noted merchant in town, establishing his general store in 1867. The store he founded continued through his son Alexander, grandsons John and James and great grandsons Alex and Jack. (see the Bovina NY History blog entry concerning John ‘Old Jock’ Hilson and his death in 1896: http://bovinanyhistory.blogspot.com/2013/07/stories-from-bovinas-cemeteries-old.html)

Also emigrating to America and settling in Bovina was John’s brother William Hilson. He was not in Bovina all that long when he died at the age of 45 in 1856.

James Hoy was born in Scotland in 1745. Around the age of 30, he married Agnes Robertson, who came from Jedburgh, Roxburghshire. They had 6 children, three born in Scotland and three born in Washington County, NY. It was his grandson, John R. Hoy, born in 1831, who came to Bovina. John was a Civil War veteran, dying in Bovina in 1901. His son, David Fletcher Hoy, is the gentleman who did all the research on early Bovina families (see the blog entry for October 6 of this year for more on Davy Hoy).

David Laidlaw was born in the Scottish borders in 1785. He married Helen Knox Hart, also from the borders, in 1825. They had eight children, all born in Scotland. The family came to Bovina sometime after the birth of their last child in 1846. Helen died in 1855 a the age of 60, her husband five years later. David may have been related to Mrs. Thomas Miller (see Miller family information below). David’s grandson Adam had the farm where Marie Burns now lives.

Thomas Liddle was a native of Scotland, born in Liddlesdale, Roxburghshire in 1785. He emigrated to this country in his youth and settled in Bovina, where in 1804 he married Margaret Archibald, a native of Lanarkshire, Scotland. She was eight years his senior. They had eight children. Margaret died in 1857 at the age of 80, survived by Thomas, who lived another decade and died at the age of 83 in 1868. His farm was on Bovina road. It stayed in the family for three generations before it was sold out of the family.

Brothers David (b 1795) and William (b 1791) Miller settled in Bovina about ten to fifteen years apart. They were sons of Thomas Miller and his wife Agnes Laidlaw from Hawick, Scotland. Thomas was active in his local church near Hawick in a place called Roberton. He was for a number of years the ‘beadle’ of the church – basically a lay assistant for the minister. Thomas and Agnes had five chidren. As well as the aforementioned sons, David and William, there were two other sons, John and Berry Shaw, and one daughter, Christina (sometimes referred to as Christain). Berry Shaw and Christina also came to America about the same time as William, but John stayed in Scotland where many of his descendants can  be found today.

David came to America first. He settled in Bovina before 1819 and had a farm established by 1821 in the area of Bramley Mountain. He filed a declaration of intent to become a citizen on February 28, 1821 but didn’t apply to take his oath until May 29, 1840. David was married twice, first in Bovina in 1819 to Agnes Thomson, then, sometime after Agnes's death in 1829, to Isabella Turnbull. He had five children by his first wife and two daughters by his second. David Miller died in 1883 and is buried in Bovina.

William came to America in 1831, possibly traveling with his brother and sister, as well as his second wife, Isabella Dickson and his three children. He was a tenant farmer at Muselee, in the Scottish Borders before emigrating. He also purchased land on Bramley Mountain, starting with 100 acres, in 1833. William was active in the community, serving as a road commissioner for some time and was active in the United Presbyterian Church of Bovina. He died on January 29, 1870. His wife died on December 13, 1882, aged eighty years. Both are buried in Bovina. All of his children settled in Delaware County.

The Ormiston name is one of the prominent Scottish Borders names, believed to have originated from a place name in the borders. It is believed that the Bovina Ormiston's are descended from "the Black Laird," James Ormiston (1522-1573). He was one of the conspirators in the murder of Lord Darnley, the husband of Mary Queen of Scots. He was knighted by the Queen in May 1567, about 3 months after the murder. By December he had been convicted of treason and his estate was forfeited. Ormiston was captured at Jedburgh in 1573 and hanged in December of that year.

The first Ormiston to come to the United States was James' five-greats grandson, William Ormiston. He was born in Scotland in 1780 on a tenant farm called Bonran, not too far from Hawick. He married Jane Graham around 1801. About a year later, he came to America, staying for a time in Philadelphia where he had an uncle. Their first child was born there. By 1804, they were settled in Bovina where the rest of their seven children were born. William’s father pleaded with his son to come back to Scotland, but William showed no interest in doing so. Janet died in 1856 and William in 1864. They were both members of the Association Presbyterian Church and are buried in the old church cemetery at Reinertsen Hill Road. (For more on the Ormistons, go to http://www.dcnyhistory.org/familyormiston.html where you will find a couple of histories written by Lloyd Ormiston about his family. Lloyd was an uncle to the Davidson brothers.)

William Richardson was born in in Tiviothead, Roxburghshire in 1828. He came to the United States in 1849. He lived with the David Laidlaw family and worked as a farm laborer. In 1862, he enlisted in the 144th NY Infantry and served until the end of the Civil War. He married Isabella Sloan and would have three children with her before her death in 1874. Their eldest daughter, Elizabeth, is the mother of Isabell Irvine Russell. An aside – when I made my first visit to the Scottish Borders I hired a taxi to take me to the Roberton church where my ancestor, Thomas Miller (mentioned earlier), had served as beadle. There was something in the driver’s speech pattern that immediate made me think of Isabell Russell. I couldn’t explain exactly what, but it seems that Isabell likely picked up this pattern from her Grandfather Richardson. She would have known him into her adulthood – he died a few months after her marriage to Cecil Russell in 1916.

This postcard shows a house in Scotland that Richardson once lived in. The note on the back is by David Hoy, obtained during his 1908 visit to Scotland. 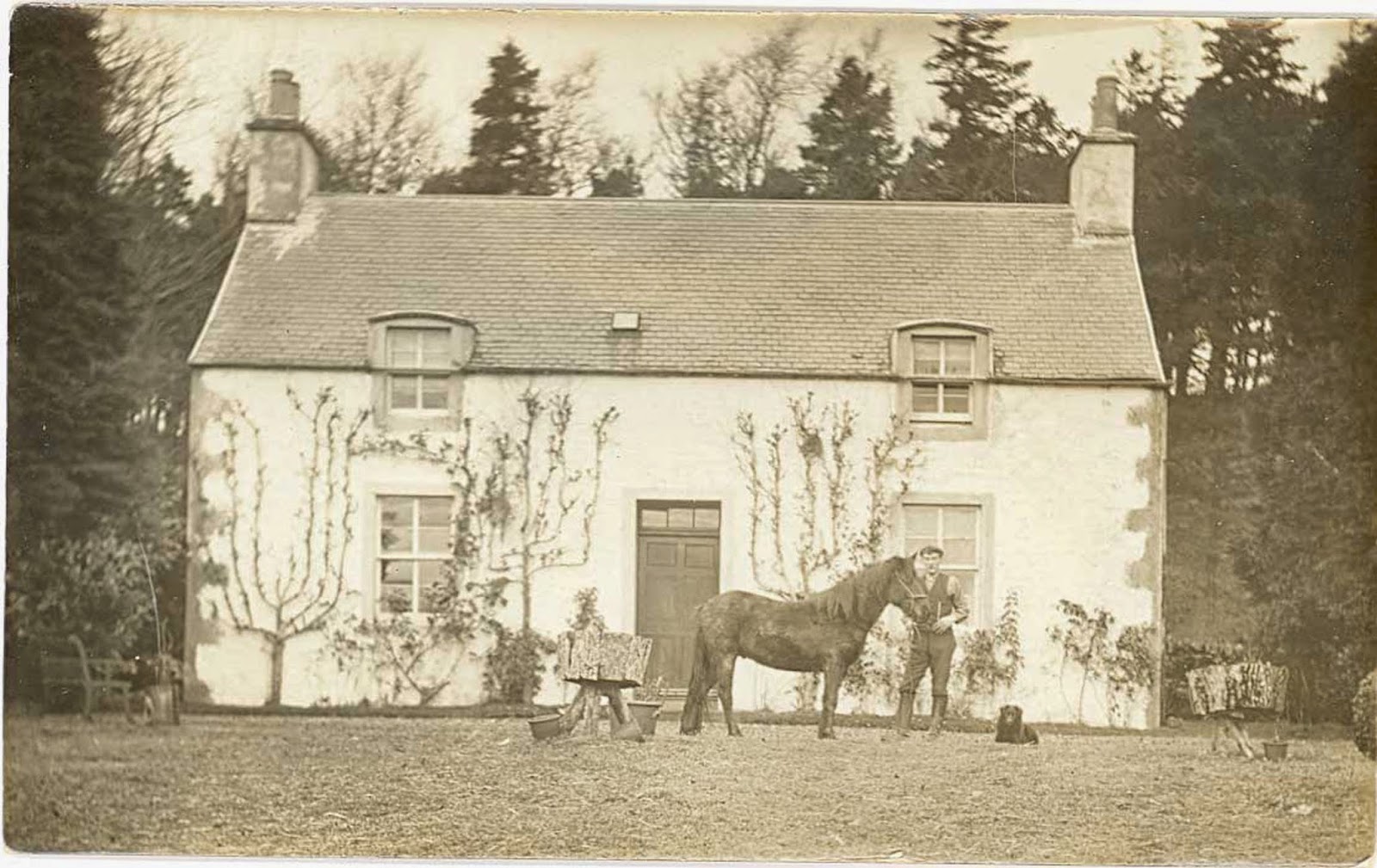 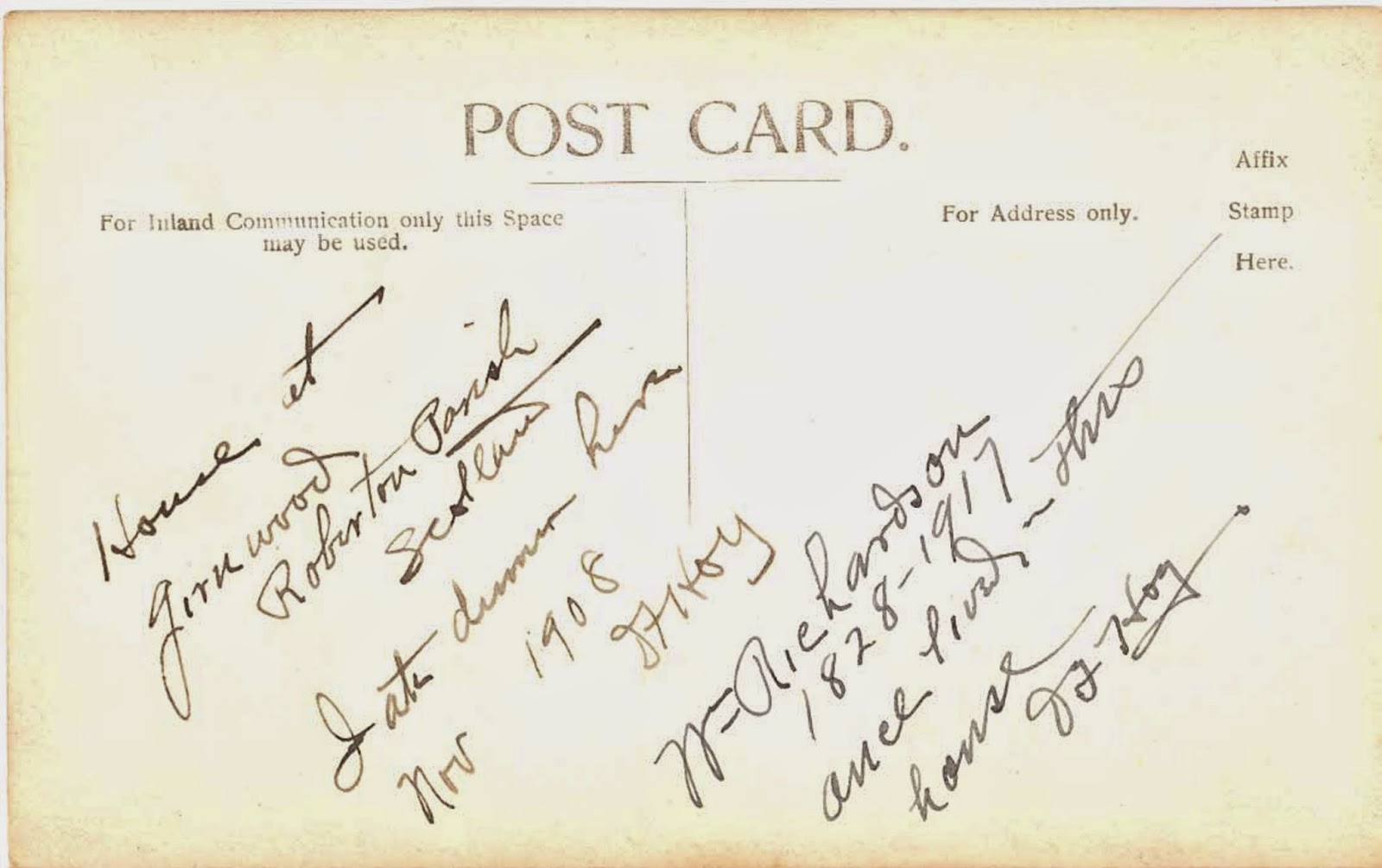 William Storie was born in Roxburghshire in 1761. By 1802, he was in Bovina and married to Mary McCune, a native of what is now Northern Ireland. They had six children. William died in 1814, when his youngest child was six months old.

Walter Stott was born in Scotland in 1771. He married Jennet Ormiston, who was born in 1765 in Wilton, Roxburghshire. They had three children, all born in Scotland. They emigrated to the United States. Their sons Walter and George both settled in Bovina. Walter married Scottish native Mary Neish while George married Bovina native Ellen Storie. For more on the Walter and Mary Stott family, look at this blog entry for July 21, 2014 (http://bovinanyhistory.blogspot.com/2014/07/stories-from-bovina-cemeteries-stott.html).

The Strangeway family comes from the eastern area of the Scottish borders near Berwick. Christopher Strangeway was born in Allanton in 1814. He came to America with his father Thomas probably when he was a teenager. The family settled in Middletown, NY. Christopher bought a farm on present day Route 28 in Bovina. Married to Margaret Thompson in 1836, they would have seven children. Among Christopher and Margaret descendants are Ruth Coulter Parsons, Celia Coulter and Jack and Alex Hilson.

There are other natives of Scotland among Bovina’s early settlers, though many were not from the borders region. If I am missing a Bovina family from Scotland’s borders, let me know.