I will be doing two or three entries related to Bovina place names, starting with the earliest published reference to how Bovina got its name. In 1860, a gentleman named J.H. French published the Gazetteer of the State of New York: Embracing a Comprehensive View of the Geography, Geology, and General History of the State, and A Complete History and Description of Every County, City, Town, Village and Locality. With Full Tables of Statistics. This book has been an invaluable tool for researchers looking at a snapshot of New York State a year before the Civil War. A main section of the book is a description of every county and every town within the county. Below is the entry for the Town of Bovina. It provides the earliest written reference as to how Bovina came by its name and probably the earliest published history of the town, albeit brief. I was able to download the images below using Google Books. The Bovina entry started on page 259 of the book and continued on 260. That is why the first footnote is '9' and the rest start back with '1.' The item in parentheses (p.v.) stands for postal village (thanks Gabrielle Pierce for clarifying this). Click on the image to see a larger size of the text (you can also see the transcription at the end of this entry). 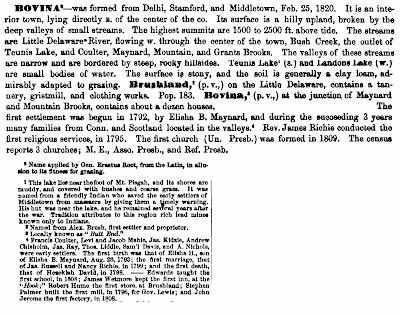 The reference to Bush Creek could be a typo and might refer to Brush's Brook, which runs through the hamlet coming down off Pink Street.  Given the way it is written, however, it might be referring to the outlet of Tunis Lake. I have not figured out yet where Grants Brooks is located.  I cannot find any reference to anyone named Grant in Bovina for whom it would have been named.  And it doesn't show up in the 1869 Beers Atlas.

Here's the transcription of the Bovina entry from the Gazetteer:

BOVINA - was formed from Delhi, Stamford, and Middletown, Feb. 25, 1820. It is an interior town, lying directly east of the center of the county. Its surface is a hilly upland, broken by the deep valleys of small streams. The highest summits are 1500 to 2500 ft. above tide. The streams are Little Delaware River, flowing west through the center of the town, Bush Creek, the outlet of Teunis Lake(1), and Coulter, Maynard, Mountain, and Grants Brooks. The valleys of these streams are narrow and are bordered by steep, rocky hillsides. Teunis Lake (s.) and Landons Lake (w.) are small bodies of water. The surface is stony and the soil is generally a clay loam, admirably adapted to grazing.  Brushland(2)(p.v.), on the Little Delaware, contains a tannery, gristmill, and clothing works. Pop. 183. Bovina(3)(p.v.), at the junction of Maynard and Mountain Brooks, contains about a dozen houses.
The first settlement was begun in 1792, by Elisha B. Maynard, and during the succeeding 3 years many families from Conn. and Scotland located in the valleys(4).  Rev. James Richie conducted the first religious services, in 1795. The first church (Un. Presb.) was formed in 1809. The census reports 3 churches, M.E., Asso. Presb., and Ref. Presb.

9. Name applied by Gen. Erastus Root, from the Latin, in allusion to its fitness for grazing.
1. This lake lies near the foot of Mt. Pisgah, and its shores are muddy, and covered with bushes and coarse grass.  It was names from a friendly Indian who saved the early settlers of Middletown from massacre by giving them a timely warning.  His hut was near the lake, and he remained several years after the war.  Tradition attributes to this region rich lead mines known only to Indians.
2. Named from Alex. Brush, first settler and proprietor.
3. Known locally as "Butt End."
4. Francis Coulter, Levi and Jacob Mabie, Jas. Kidzie, Andrew Chisholm, Jas. Ray, Thos. Liddle, Sam'l Davis, and A. Nichols, were early settlers. The first birth was that of Elisha H., son of Elisha B. Maynard, Aug. 26, 1793; the first marriage, that of Jas. Russell and Nancy Richie, in 1799; and the first death, that of Hezekiah David in 1798.  ___Edwards taught the first school, in 1808; James Wetmore kept the first inn, at the "Hook;" Robert Hume the first store at Brushland; Stephen Palmer built the first mill, in 1796, for Gov. Lewis; and John Jerome the first factory, in 1808.

Posted by Bovina Historian at 8:36 AM