The August 29, 1924, the Andes Recorder reported the death of John Lloyd Oliver in the early hours of August 24.  Born in Bovina in 1902, he was the son of John and Stella (Dumond) Oliver.  His father died when he was only five years old.  The notice about his death was not his first appearance in the Andes Recorder.  In the July 4, 1919, issue, the following article appeared:

Lloyd Oliver had a narrow escape Tuesday [July 1, 1919] from going off the high wall at Alex Myers’ in his car.  Something was wrong with the car and Terry, the garage man, towed it backwards to the top of the pitch and he started to coast down.  In front of the Myers house a rod dropped down careering the car into the air so that only one wheel was on the ground and when it righted itself it was on the wall and less than a foot from the edge.  Mr. Oliver who had no brakes, succeeded in guiding the car along the wall and it was stopped in front of Elliott Thomson’s.

This incident happened going down the hill from where Jardine's is located.


At the time of his death, he had been working as a hired hand on the farm of John Burns (now the Goggins farm at the end of Crescent Valley Road).  The Recorder noted that "he had not been in the best of health but ... had been out Saturday night and was heard to come in about 2 o’clock Sabbath morning."  Mr. Burns went to awaken him in the morning but got no response when he knocked on the door.  He went into the room and tried to arouse Lloyd but could not awaken him.  Mrs. Burns joined him and they determined that he had passed away.  The newspaper went on to note that "Mrs. Burns heard a groan about 5 o’clock and there was a sound like a gasp following it, but thought nothing of it."

His funeral was on the 26th and was largely attended.  His mother, a brother and two sisters survived him. 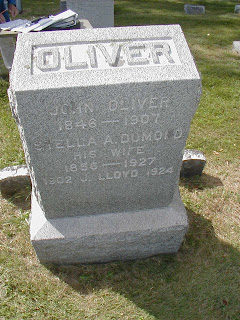