The descendants of Francis Coulter (1771-1846) and Nancy Glendenning (1766-1843) held their 20th reunion on August 17, 1938, seventy-five years ago.  It was held at the home of Mr. and Mrs. Christopher Gladstone, with 107 people attended.  In the minutes of the reunion, the treasurer reported a balance of $12.16.  An additional $11.95 was collected.  Officers for the following year were elected: President, Marshal Adee; Vice President: W.G. Coulter; Secretary, Helen McDivitt; Treasurer, Mrs. Thomas McGowan.  Mrs. John Hilson was made the dinner committee chair.  The Wilbur family of Arena offered their home for the 1939 reunion.  Talks were given by Re. Peter McKenzie, Rev. Donald Brush and Rev. David Murray.  The formal meeting ended with the taking of a family picture, which is below.  With the exception of the years during World War II, the Coulter reunions continued until 1967, when they were discontinued. 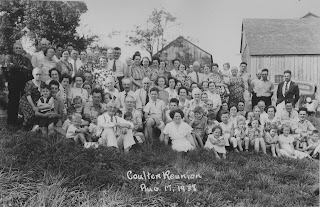