Helen Blair was born October 27, 1889 in Bovina, the daughter of John Walter Blair and Elizabeth J. Miller (better known as Lib). From all available information, it appears that Helen holds the distinction of being Bovina's oldest person.  At her death, she was less than a month away from her 108th birthday.  There was some longevity in Helen's family.  Her mother, Lib Blair, was 97 at her death in 1965.  It is through her mother that Helen and I are distantly related.  Lib's older sister, Nancy Miller, married Alexander Burns.  Her daughter was my great grandmother Ella Burns LaFever.

October was an important month in Helen's long life.  Not only was she born in October, she was married to Marshall Thomson, the son of Andrew D. Thomson and Jennie McNaught, on October 2, 1912.  She was widowed on October 14, 1962, less than two weeks after celebrating her 50th wedding anniversary with an open house.   On October 24, 1978, she sold her home in Bovina to Wayne and Marilyn Gallant and moved to a retirement community.  Helen survived her husband by almost 35 years, dying at the Delhi Infirmary on October 4, 1997.  She was a little over three weeks shy of her 108th birthday.

Helen spent most, but not all of her life, in Bovina.  She attended the Oneonta Normal School (predecessor to SUNY Oneonta) and taught during the 1909-10 school year at the Bramley Mountain School, where she had ten pupils.  In 1926, she moved to North Hills, Long Island with her husband where he managed an estate for 20 years.  Upon Marshall's retirement in 1947, they returned to Bovina to live with her mother.   Marshall was 75 at his sudden death in 1962.  Helen remained in Bovina until her late 80s when she sold her home to the Gallants and moved into a retirement home.  She lived for some time at the Hearthstone in Hobart before ultimately going to the Delhi Infirmary.  When Helen turned 100, Grace Roberts told me that she insisted on having shoes with heels for her party.  And I recall watching the Today show while at a conference in Gettysburg in 1993 when Willard Scott wished Helen a happy 104th birthday. 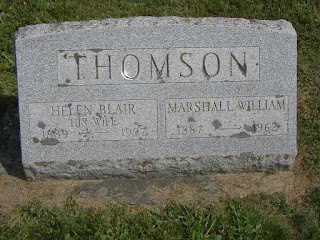 Note:  Visitors to the Bovina Cemetery may be slightly confused to find two Helen Thomson's married to Marshalls.  Helen Schott Thomson (1910-1992) married J. Marshall Thomson (1898-1968).  Their grave is not far from that of Marshall William Thomson and Helen Blair Thomson.