Matt Pelletier often has weird but intriguing queries about Bovina history (he's the one that got me going on my Indian Rocks fixation).  A couple of weeks ago, he wondered about what brands of gasoline were sold in Bovina, noting that it appears that at least three name brands were sold simultaneously in town.  I told him I'd have to do a bit of research, but as he had pointed out, it seems just looking at photos would answer the question.  And indeed it did.  Though I can't be totally positive on the time frame, it appears that in the 50s and early 60s, someone driving through the hamlet of Bovina Center had a choice of three name brands.  As you came into town off Route 28, your first choice would have been Mobil at Hilson's (known as Mobilgas in the early days).  If Mobil wasn't your brand, a quarter mile further would have brought you to Clayt Thomas's garage, where he sold Cities Services, better known today as Citgo.  And if you didn't want that, you would see within sight of Thomas's garage Russell's Store, where the preferred brand there was Shell.

After Hilson's closed, you could still get gas at Gallant's Garage, the successor to Thomas's, and at Russell's.  From photos in the early 80s, the gas pumps at Wayne Gallant's said Citgo.  It's always possible that by then he was getting gas from another source and using the Citgo pumps, but I really don't know how flexible companies were then about using a competitor's pump.

And Russell's didn't always have Shell.  In the early days of the automobile, the store had the Mobil concession - at least for motor oil.  From the picture below, probably from the early 1920s, you can see in the lower right 'Socony Motor Oils.'  Socony was essentially the parent company of Mobil and registered the name 'Mobilgas' as a trademark in 1920. 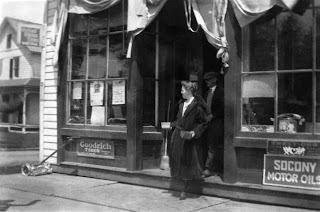 What I don't know is when the first automobile gas pump made its appearance in Bovina.  Anyone have any ideas?
Posted by Bovina Historian at 9:57 AM