Seventy-two years ago this month, census enumerators started visiting households in the Town of Bovina as part of the 16th Decennial Federal Census. Enumerators worked for about a month collecting information on every person in town.  When done, Bovina's population was found to be 806 people, up 35 people from the 1930 census.

This census was released to the public on April 2.  A quick perusal brought up some interesting tidbits:

The census included information as to where people were living five years previously.  Twenty-seven people in Bovina reported coming from Nebraska:

The 1940 census asked a number of questions concerning employment, including the number of hours worked March 24-30, 1940 and the annual salaries.

Here's a sample page from the Bovina census.  I was able to download it from Ancestry.com, but the 1940 census also is available for free at http://1940census.archives.gov/.  I happen to have chosen the page where my dad and his family show up - dad's on line 59. 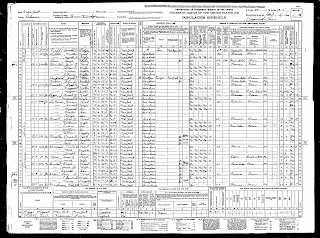