During a recent, somewhat impromptu group hike to Indian Rocks on December 27, we found this carving on the top of the rocks: 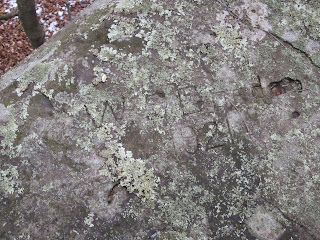 So who was W. S. Gordon?  William Scott Gordon was born in Bovina on April 22, 1903, the son of Thomas Gordon and his second wife, Mary Scott Gordon.  William was joined a few years later by a sister, Margaret.  Margaret was well know by anyone who went to local schools in the 40s to the 70s as a social studies teacher at Delaware Academy.

The timing of this carving is interesting, for it is the year that William turned 18.  Unfortunately, William's 18th birthday was not a happy one for the Gordon family for on that day, William's father died.  Thomas Gordon had been stricken with a heart attack the day before and died in the early morning of his son's birthday.  Though he was 75, Gordon's death was unexpected.  He was serving as the Town Clerk in Bovina when he died and was active in the Civil War veterans' organization, the Grand Army of the Republic.  William finished high school and attended college at the Pratt Institute in Brooklyn.  He ultimately settled in Westchester County and was employed by the New York Central Railroad in their research division.

William was only 57 when on June 3, 1960, he suddenly died while on board a New York Central train traveling from Chicago to New York City.  He had been returning from a business trip when he suffered a fatal heart attack.  A porter discovered William on the floor of his bedroom on the train. He was pronounced dead and the body was removed from the train in Cleveland, where it was taken to a funeral home.  Several days later, officials from the railroad accompanied the body to William's home in Croton-on-Hudson.  The funeral was held there on June 7.  He was survived by his wife Laura and his sister Margaret.William was buried in Bovina near his parents. Margaret survived her only brother by over 40 years, passing away in January 2001.

Did this young man take a walk up to Indian Rocks on that sad April day in 1921 to be alone with his thoughts?  And while musing on the twist of fate that took his father on his 18th birthday did he carve his name there?  We probably will never know, but it's a poignant story by which to remember William.  And maybe that's what he hoped to do by carving his name on Indian Rocks.
Posted by Bovina Historian at 9:00 AM