Thomas Elliott Hastings, the son of James Hastings and Elizabeth Elliott, was born in Bovina in 1829.  He opened a store for general merchandise in 1852, in partnership with James Elliott.  The store was located where Russells is now, but whether or not it was the same building is not clear.  After only two years, Mr. Elliott sold out to W. D. Telford.  Six years later, Hastings bought Mr. Telford's share and ran the business alone for five years.  In 1866, Hastings took on a partner, Mr. J. K. Hood.  Two years later, Hastings sold out his share to Mr. Hood and retired from the trade.  His retirement did not last long.  In 1870 he put up new buildings and opened a store on the same site as his earlier store, ie Russells.  In Munsell's History of Delaware County, the lithograph of Hastings store is easily recognizable as Russells (See the June 14, 2009 Blog entry for the lithograph and further history of the store.)

This venture lasted considerably longer.  Thomas sold out to A. T. Doig in 1893, but he never completely retired.  He continued to be a dealer in agricultural implements, cattle feed, and land fertilizers.  In the Biographical Review of Delaware County, published in 1895 (and from which much of this information derives), it was noted that Hastings "never kept a clerk, he and his partners preferring to do the work themselves."  Doig ran the store until 1919, when he in turn sold it to Cecil Russell.

Hastings was married to Jane Blair, who predeceased him in 1887 when she was only forty-five years old.  They had five children.  The four sons all went to college or some other institution of higher learning.  Their eldest son, James Blair Hastings, graduated from Hamilton College and was a professor in Franklin.  Thomas Hastings was Town Clerk in Bovina for a number of years and was a member of the Bovina United Presbyterian Church.

Hastings generally was successful in life, but he was involved in one major business failure.  He wasn't the only one and likely was not one of the reasons the venture failed.  In 1898, Hastings and Alexander Hilson were two of the people who put their names on the charter for the Delaware Railroad Company which, if it had succeeded, would have brought the railroad into Bovina, as well as connecting Delhi and Andes.  The venture failed that same year (see my series of blog entries from March 2011 for more about this railroad). 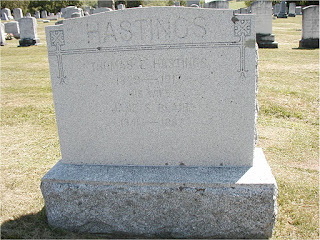 Hastings died in 1917, thirty-two years after losing his wife.  He was 88 and had been suffering from heart disease for a number of years.  His entry in the aforementioned Biographical Review, written when he was still alive, noted that "Thomas E. Hastings is a very self-reliant man, who might adopt as his own the saying of the celebrated author of "Don Quixote," 'He is best served who has no occasion to put the hands of others at the end of his arms.'"
Posted by Bovina Historian at 8:00 AM