Ghosts of Christmases Past

I thought it would be fun to look at my diary from past Christmases but decided I should also look at a few diaries in my possession from the Cecil Russell family to see what they had to say about the holidays.

Isabel and Cecil's daughter Marjorie kept a diary in 1946 and 1947 though, like her mother, she did it sporadically. She did report on Christmas Eve in 1946 that she was "busy getting ready for Xmas dinner..." She noted on Christmas Day that she had a "grand time." Her uncle Charles Russell and his wife Hildreth Tuttle Russell came, as did their son Allyn. They feasted on a "good turkey from Millard Russell." In 1947, she noted that her mother had a cold, which, by the day after Christmas, she had passed on to Marjorie.

Isabel kept a series of five-year diaries starting in 1954 and was much more faithful in recording an entry each day. In her attempt to record as much as she could in a small space, she wrote small, making these diaries a real challenge to read (or to distinguish one year's entry from another). Each Christmas Eve she mainly noted that the store was terribly busy with last minute shoppers and that they often didn't sit down to supper until 8 pm or later. She reported for Christmas Day in 1955 and 57 that it was nice and clear and that in 1957 the ground was bare. In contrast, there was record breaking cold in 1958, with the temperature still at 0 at 11 am. The weather was fairly stable in subsequent years until 1963, when Isabel recorded a lot of snow on Christmas Eve and again on Christmas Day: "Couldn't see any distance at all roads slippery had to drive slow." The next year in contrast saw weather 'just like spring 50 degrees this AM." Christmas 1966 saw "The worst storm for a long time. Wind blew hard all night have 15 to 17 [inches]." Christmas Eve and Day 1968 saw Isabel nursing a cold. She did her stint in the store in spite of her cold and noted that she "stood it ok."

Here's an undated picture of Russell's Store in the snow. Probably from the 40s or 50s. Whether it was during the holidays cannot be determined. 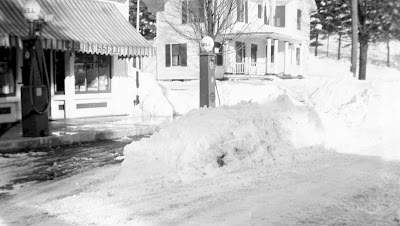 The first time I recorded my holiday activities in a diary was in 1970. By then, I was working for Russell's after school. I noted on Christmas Eve that there was 3 inches of wet snow, which I assume I had to shovel at the store, though I don't specifically say so. I also noted that Russell's "gave me a box of candy and a pair of soxs (sic) for Christmas." Cecil, Isabel and Marjorie were always very good to me. That evening, my sister Diane and I participated in the Christmas Eve service at the UP Church. My family had a tradition of opening presents on Christmas Eve, so that same night I reported getting "a very nice telescope, a Bill Cosby record and a shirt." Though the telescope was used primarily to gaze at the moon and stars, that first night we did look at the windows in the house across the way!

And I close with my entire diary entry for Christmas day 40 years ago: "I looked through my telescope quite a lot today. I could see things quite clear. Our dinner was very good but it filled me up quick. It snowed a little but not much. At 7:15 we went up to Howard's and Laura's [my Uncle and Aunt, Howard and Laura LaFever] and saw Grandma and Grandpa [Anna Bell and Ben LaFever]. I played ping-pong and played the piano [I can barely play ping-pong and have no idea how to play a piano beyond 'Chopsticks'!] . Watch[ed] on TV the movie Life with Father. Now bedtime. Goodnite."

And a very Merry Christmas to all.
Posted by Bovina Historian at 7:06 PM