In my blog entry for October 30, I reported on a 1923 fire that destroyed the Yankeetown Schoolhouse on Cape Horn Road. This isn't the only time that Bovina lost a school to fire. In fact, over 100 years earlier, a schoolhouse on what is now Pink Street burned.

In 1816 the district resolved that "any damage happening to the School House by Means of any individual ... or those accountable for them shall forthwith make it good." In 1819, the district attempted to make someone "make it good" when the school burned, but it was several months after the fire before they identified a culprit. In fact, when the school burned, probably in January 1819, it first was seen as an accident. This certainly made sense, given that all the heating was done with wood fire.

At a special meeting on February 5, 1819, held at the home of William Seacord, the district decided that there would be no school kept for the remainder of the school quarter. They also decided to build a new school house, to be a frame building 18 by 22. In order to pay for the new building, a tax of $120 was to be levied on district inhabitants. The district held another special meeting less than two weeks later, after some complaints were received that the minutes did not appear to match with what was agreed. Each resolution was reviewed and approved. They also resolved to form a committee to work with John McCune on the site of the new school and the purchase of that site.

The district's regular annual meeting on October 5, 1819 included a resolution to have the trustees call on William Jones to answer to the charge that his son was responsible for burning down the school. Ultimately, there must not have been enough evidence to hold the Jones family accountable for the fire, for when the structure was finally built, the taxpayers paid for it. Did the son of William Jones burn down the school? The answer has been lost to history.

The building of the structure took some time. In late 1819 or sometime in 1820, the district held a special meeting to request an itemized list of every expense for the construction of the new school house. They also requested itemization of the remaining expenses, including $2 for the laying of the hearth and completion of the chimney, 50 cents for a lock for the door and 75 cents for a chair. At the annual meeting in October 1820 (the year the district became Bovina District Number 2), it was noted that work still needed to be done to complete the house. Apparently, this or other issues at this meeting got rather contentious, for it was "Resolved that if any person shall at any future meeting held in this house behave Disorderly he shall at the order of the Chairman Leave the house."

The building that replaced the burnt down school was not the last one built for the district. There appear to have been at least two if not three subsequent structures. The last probably built in the late 1850s, only about 10 years after its predecessor was built.

Here's a picture of the last District 2 school house, dating probably from the 1920s. 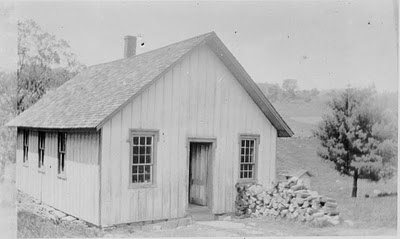 Information for this entry came from the minute book for Bovina Common School District Number 2, 1815-1867, courtesy of the Bovina Historical Society. The book had come down through the Storie family and was given by the family of Vera Storie.
Posted by Bovina Historian at 7:00 PM