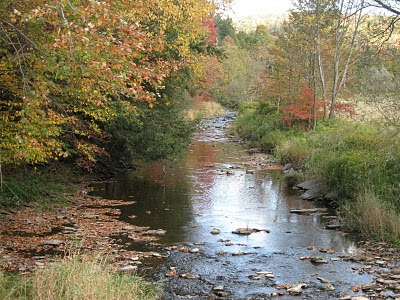 It's October 1 and it looks like we may have another flood for the history books - at least for the local history books. Coulter Brook has come out of its banks in spots and my cellar is flooded. Today's flooding has led to closure of all county roads. I took a wander through the hamlet, from the bridge on Coulter Brook Road by the cemetery to the bridge at the other end of the hamlet by McPerson's. The little babbling brook is now a roaring river. Chuck McIntosh, who recalled the 1953 flood, thought the water levels were at least at the same level.

I took some pictures during my wanderings. The two pictures show Coulter Brook. The top photo was taken September 25, the bottom one on October 1. The video includes a video of Coulter Brook from about a year ago and a shot taken just a day before the flooding, as well as several shots of the October 1st flood itself. 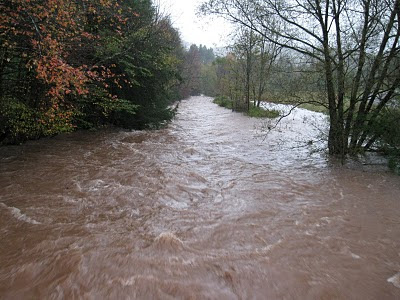 In 1996 Bovina saw two different flooding events. The town wasn't hit as hard as some areas near by. The flood on January 19 hit Walton and Margaretville particularly hard. Another flood hit November 9, 1996. My dad noted that both events had the same numerals - ie 1/19/1996 and 11/9/1996. In both floods, Delaware County was declared a disaster area.

By this evening, the water is definitely receding from the October 1, 2010 Bovina flood - at Coulter Brook and in my cellar. It's time to get things dried out.