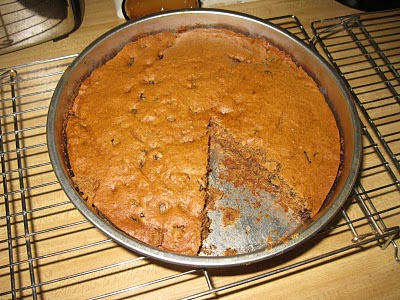 Tonight's baking attempt from the 1911 cookbook was a simple one - an Applesauce cake. Here's the recipe:

I mixed everything in the order given and baked at 350 degrees for 40 minutes in two 9-inch round pans. The applesauce was home made, using apples from my sister and brother-in-law's back yard. My only ingredient substitution was brown sugar for white sugar (and for all I know, brown sugar may have been meant, though by 1900, brown sugar was considered inferior to white sugar). And instead of mixing by hand, I used an electric mixture (though mixing by hand would not have been much more of an effort). The layers came out small, so one pan might have sufficed. And I do want to try it as a loaf. The taste - not bad, but I'm not a big fan of cloves. I think it will be great with a little whipped cream (and maybe reduce the cloves a bit).

This is a pretty standard recipe for applesauce cake. I found almost the identical recipe, submitted by Mary Inman, for the 1975 Bovina Historical Society cookbook. The only addition was a tablespoon of molasses.

Unfortunately, I have not been able to figure out who H.L.A is. Some people who submitted recipes only gave their initials. So the contributor appears to be lost to history, though her recipe is not.
Posted by Bovina Historian at 7:14 PM