I took my first stab today at trying a recipe from the 1911 Bovina UP Church Cookbook, choosing to make 'French Rolls.' (See my July 15, 2010 posting for further information about this cookbook.) Here's the whole recipe:

This recipe presented several challenges. My main confusion was over the 1/2 cup of yeast. I ended up dissolving a package in 1/2 cup of warm water. It made the dough too wet (see the picture below). I let it go ahead and raise, and it did raise some, but I had to more than triple the flour to be able to handle it after the first raising. I wonder if the recipe should have read 1/2 cake of yeast. No time for the raising was given, so I assumed the dough needed to double in bulk after each raising. And I wasn't sure how the rolls should have been shaped, so I just did them as dinner rolls. 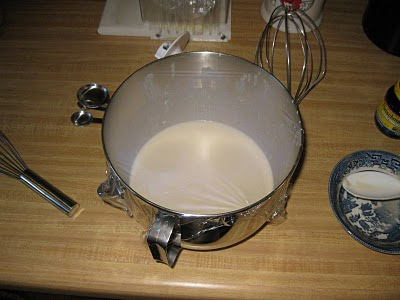 I used some modern substitutions, including bread flour and skim milk instead of whole milk. I did not scald the milk - I understand that is a holdover from pre-pasteurization days. And I used a Kitchen Aide mixer to knead the dough. With no temperature, I had to go with my own experience. I baked the rolls at 375 degrees. They took about 25 minutes to bake, so I suspect the oven wasn't hot enough and that 400 would have made more sense.

I have a friend and former colleague from the New York State Archives, Pamela Cooley, who is an expert at historical recipes - she's already tried some of the recipes from this cookbook. I'll be touching base with her for any thoughts she may have about this. 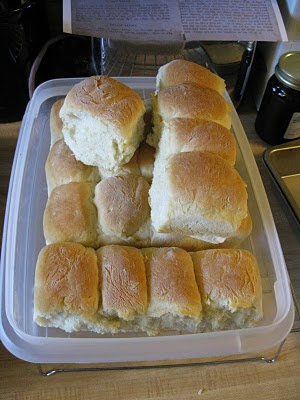 But when all is said and done, the rolls turned out just fine and were served at a dinner I made for my sister and brother-in-law. And the verdict from them is that they are very good.

This recipe was submitted by Eva B. Maynard. Eva was Eva Belle Scott. She was born in 1879 and married William H. Maynard in 1899. Eva joined the UP Church in 1890 was a member for 23 years when she transferred her membership elsewhere, probably because she left the area. Eva died in 1961.

More recipes from Bovina's past are coming, so get your appetites ready for further culinary treats.
Posted by Bovina Historian at 5:26 PM