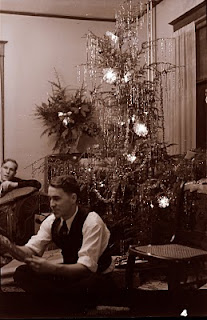 In the spirit of the season, here are three images from Bovina from the Hilson Family. [Click on each image and you'll get a larger and clearer view of it in a new window.]

Christine Hilson Batey graciously let me scan some of her family's albums last year and there are some gems. This first image to the left dates from probably the late 30s. The gentleman in the foreground is Alex Hilson. His younger brother Jack (and Christine's father) is in the chair at the left.


This is a view of Hilson Brother's store, probably also from the 30s, though not necessarily from Christmas. Note the 'vehicle' at the left in the picture is a horse drawn wagon with milk cans. 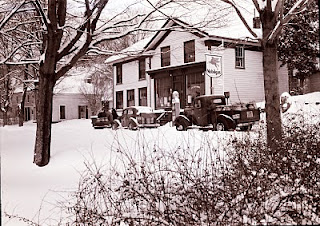 This winter scene, also not necessarily dated to Christmas, shows Scotts Bridge, which was at the 'lower' end of the hamlet. Noted as one of Delaware County's 'crookest' bridges, it was determined to be a safety hazard in the 50s. At one point, school buses crossing the bridge had to unload their passengers and have them walk across the bridge, with the bus following. It was replaced with a modern bridge, located a bit further down the river. When the new bridge was done, the old bridge was torn down, despite afforts by Frank and Stella McPherson to save it. 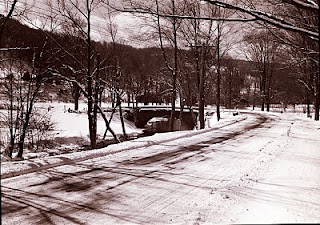 A Merry Christmas to all, and best wishes for the New Year.

Posted by Bovina Historian at 11:12 PM