This Day in Bovina for December 2020

Here are the daily entries for December 2020 from the Town of Bovina Historian Facebook page:

Sixty-five years ago today, on December 1, 1955, the Bovina Town Board met and approved these claims submitted by the town supervisor, Henry Monroe. 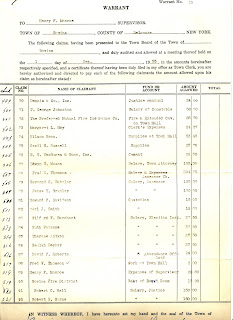 Thirteen years ago today, the December 2, 2007 issues of the New York Times carried a review of "The Toy Farmer," a children's book written by Bovina native Andrew T. Pelletier.

160 years ago today, on December 3, 1860, John Dean died. Born in County Down, Ireland, he came to Bovina before the 1830s. He married Elizabeth Johnson in 1832 and they would have eight children. They lived in the area of present-day Regan Road.

132 years ago today, the Bovina column of the December 4, 1888 Stamford Mirror reported that "J.A. Whittaker, the optician, has been in town for the past week, looking after defective eyes."

200 years ago today, December 5, 1820, John Johnston was born, son of William Johnston and Maria Lathan. He first married Sarah Mitchell and second Susan Brownell. He had four children by his second wife. Johnston died May 3, 1895 at the age of 74.

139 years ago today, the December 6, 1881 Stamford Mirror reported in its Bovina column that "James Hoy, of Kansas, formerly of Bovina, is making his friends in this vicinity a visit." This likely is the James Hoy born in 1822. He married Helen Miller in 1847. She died in 1858 after having three children. James went to Iowa after his wife's death and remarried in 1862 to Martha Jones Smith. They had three children in Iowa. James died in Kansas in 1897.

138 years ago today, on December 7, 1882, Thomas Hamilton signed this document as part of his claim concerning an error on the 1880 tax roll which led to an overpayment of $15.39 in taxes. 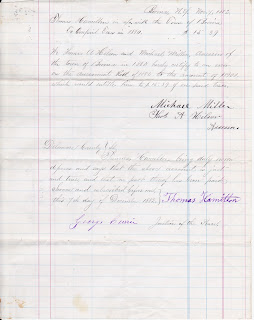 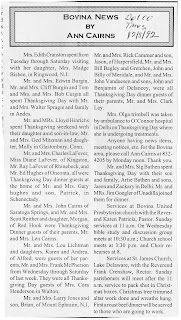 Sixty-eight years ago today, on December 9, 1952, a benefit dance was held by the Ladies Auxiliary of the Bovina Fire Department "for Billy Aitkens, who was recently wounded by a shotgun…" The music was furnished by Ernie Russ. Aitkens was wounded November 2 while hunting with his father. He was the son of Floyd and Que Aitkens.

137 years ago today, the December 11, 1883 issue of the Stamford Mirror reported on several illnesses in Bovina. They noted that "Mrs. John Hastings is quite sick with pneumonia." They noted that Dr. Telford's daughter Gracie also was sick with pneumonia and that the doctor himself was ill. And Rev. Lee's wife was reported as suffering from inflammation of the lungs. Mrs. Hastings, Grace Telford and Mrs. Lee would all recover, though Mrs. Hastings would die of pneumonia in 1889. Grace Telford, who was less than a year old when she became ill would live until 1953. Mrs. Lee died in 1897. Dr. Telford, however, would not recover and died January 11, 1884.

103 years ago, the Bovina column of the December 12, 1917 Andes Recorder reported that "Miss Leila Miller, who has spent the past three months with her brother, Earl, in St. Paul and other relatives in Wisconsin and Minnesota, returned to her home…" She was the daughter of John and Bertha Miller. They lived on Pink Street on what later became Suits Us Farm.

Twenty-five years ago today, the December 13, 1995 issue of the Walton Reporter carried this article about Marjorie Russell and Russell's Store. 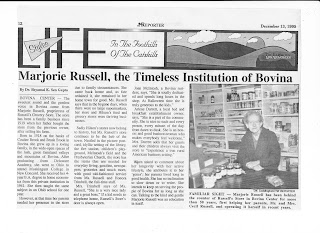 Ninety-three years ago today, the December 14, 1927 Stamford Mirror reported that "Bovina Center Has Two Fires." Both fires involved barns owned by the Hilson Brothers in Bovina Center in the area of the creamery. The first fire was big enough to require bringing in a second department from Delhi. It was noted that the lack of wind was fortunately, thus preventing the creamery and feedstore from going up in flames.

109 years ago today, on December 15, 1911, as announced in the Andes Recorder, “the ladies of the United Presbyterian church" held a masquerade social at the home of Mrs. Estella Oliver…" The paper went on to note that "All unmasked are expected to pay a fine of not more than $5 or less than 25 cents. All are cordially invited."

Ninety-three years ago today, the December 16, 1927 Catskill Mountain News reported that "Two sites have been offered for the proposed Bovina Community house." One lot was reported as being "opposite the garage…" This likely meant across from what later became Clayt Thomas's garage and is land now owned by Mark Foster. The other option was "land opposite William Archibald's new house…" This is the spot that was chosen. The paper noted that "it is planned to erect a building 36 x 80 of one story construction with basement."

The following noticed appeared in the Andes Recorder, dated 143 years ago today, December 17, 1877:  “All persons are hereby notified not to sell or give any intoxicating liquors to Hiram Scutt.  Mrs. Hiram Scutt" Scutt lived in Andes so his Bovina connection is not strong. And we can’t be sure whether this is the father or son. Hiram Sr was born in Bovina in 1815. The son was born in Andes in 1842. The father died in 1886, the son three years later in 1889.

122 years ago on December 18, 1898, Mrs. Charles F. Smith died at the age of 90.  The Andes Recorder, when reporting her death, noted that "Her maiden name was Christina Lamont, and she came to this town over 40 years ago.  She was an excellent woman, a good neighbor; always cheerful and she will be missed in this community as well as in her home.  On Tuesday, the funeral was held, the sermon being preached by Rev. Samson, and the interment was in the Bovina cemetery." Christina was the second wife of Charles Smith, marrying him in 1856, a few months after the death of his first wife. Charles survived his wife by 10 years, dying in 1908.

117 years ago today, the December 19, 1903 Hobart Independent reported "Sudden Death at Bovina Center." The article reported "The village people were very much surprised to learn of the sudden death of A. F. McPherson which occurred Saturday morning. Mr McPherson went downtown to shovel some snow, and on his way back, he felt ill and stepped in to a blacksmith shop, where he died. He had been a resident of that place all his life and was well thought of by all who knew him. He was aged 71 years. A widow and four children the youngest being 10 years old, survive beside a brother, Albert in Hobart. Funeral services were held Tuesday from the M E. church, interment in the village cemetery.

Ninety-two years ago today, the December 20, 1928 issue of the Stamford Mirror-Recorder reported: "Walter Coulter, with a few helpers, is tearing down the red barn by his mill. He will leave the basement and is taking the remainder up to the upper end of the village where he will make an up-to-date shop. They moved the large parts of the building with the tractor." This building still stands behind the house owned by Pat Parsons Miele next to the church.

Ninety-nine years ago today, on December 21, 1921, Violet Hewitt, the little daughter of Mr. and Mrs. John Hewitt, of Margaretville, died in Kingston following an operation for appendicitis. Her remains were brought to Bovina for burial.

206 years ago today, on December 22, 1814, James Gladstone was born, the son of Robert Gladstone and Ann Ray. He was born in Scotland and likely came to Bovina with his parents. He appears to have lived most of his adult life in Andes, but at his death in 1885, he was buried in Bovina in the Associate Presbyterian Church cemetery.

Seventy-seven years ago today, the Bovina column of the December 23, 1943 Delaware Republican reported that "Andrew Reinertsen's horses ran away on Monday morning but little damage was done." 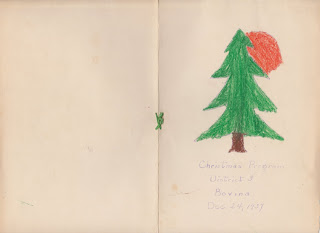 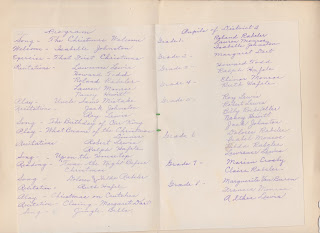 138 years ago today, the December 26, 1882 Stamford Mirror reported in its Bovina column that "Dr. Dickson is moving his stock of drugs and medicines form the basement to the main floor of his store." His store is now the Brushland Eating House.

200 years ago today, on December 27, 1820, Robert Scott posted the following notice in the Delaware Gazette: "Strayed or Stolen, From the Farm of the Subscriber in the town of Bovina, some time since, a number of young CATTLE. - Any person who will give information where the same may be found, shall be liberally rewarded."

156 years ago today, on December 29, 1864, several voters in the Town of Bovina submitted this petition requesting a special town meeting "for the purpose of determining by vote to pay a Bounty not [to] exceed Eight hundred dollars to each volunteer that shall be credited to the said town o the last call of the President for 300,000 men." 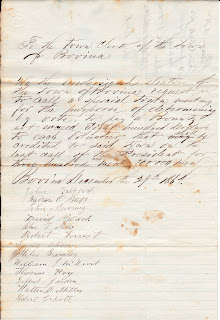 110 years ago today, the December 30, 1910 Bovina column in the Andes Recorder reported that "Mrs. Charlotte Miller continues in very poor health." Charlotte was the wife of David William Miller. Born in 1860, she was the daughter of Robert Gow and Beatrice Graham. She married David Miller in 1887 and was widowed in 1892, left with a two year old son. Charlotte died about a month after this item appeared in the paper on January 24, 1911.

129 years ago today, as later reported in the Andes Recorder, "a large party of young people had a dance in Strangeway's Hall on New Year's eve, [1891]. Music by Sutherland Bros. and Jas. Amos."