It was 100 years ago today, Christmas Day 1920, that Henry Francis Monroe was married to Ruth Ormiston at the home of her mother Margaret. Henry was born on June 19, 1896 in Bovina, the son of James and Margaret (Coulter) Monroe. Ruth was born two years earlier, June 15, 1894, also in Bovina. She was the daughter of Thomas and Margaret (Boggs) Ormiston. 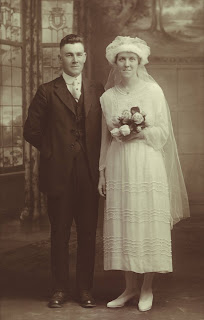 Ruth and Henry would have five children. Their first child was a short-lived son named Robert, born and died in June 1922. They would then have three daughters, Frances in 1923, Isabelle in 1925 and Elinor in 1927. In 1930 their son Lauren was born.

Henry and Ruth lived and worked on the Monroe family farm in the Mountain Brook area, where Lauren and his wife Lois still live. They were active in the community. Henry was a member of the Farm Bureau, Cooperative Extension and the Delaware County Jersey Club. He was an elder of the Bovina U.P Church for many years.
Ruth and Henry would be married for 64 years. Ruth passed away on April 17, 1985. Henry survived his wife, dying on October 13, 1992. At his death, he was survived by his 4 children, 12 grandchildren, 30 great-grandchildren and three great-great-grandchildren.
gfg
Posted by Bovina Historian at 8:00 AM