Sixty-eight years ago today, on June 1, 1952, Alphonso P. Lee died, just shy of his 90th birthday. He was the son of Charles Lee and Sarah Bouton and was named for his paternal grandfather. He is buried in Bovina next to his first wife, Ada Davis, who died in 1891. Alphonso married as his second wife Julia Van K. Stewart, who also predeceased him in 1926.

138 years ago today, on June 2, 1882, as later reported in the Stamford Mirror, "Will Cathels left his team standing before Strangeway's store…and went into the store. The horses became frightened and ran away, throwing a new plow from the wagon and breaking it, and then smashed up the wagon."

Eighty-one years ago today, on June 3, 1939, as later reported in the Bovina column of the Delaware Republican, "Miss Margaret Gordon accompanied Miss Alice Hayes with the Brownies to Howes Caverns…"

Ninety-nine years ago today, on June 5, 1921, William Johnson and his wife arrived at the home of his sister, Mrs. Alex Crosier at the Butt End. Mr. and Mrs. Johnson had traveled from their home in Kansas, leaving on May 23. The Andes Recorder in reporting their arrival noted that they "covered over 1700 miles in their Maxwell car."

124 years ago today, June 6, 1896, as later reported in the Andes Recorder, "The funeral of Mrs. John Phyfe on Saturday was largely attended.  Rev. Samson officiated.  She was a loving wife and kind neighbor, and will be missed in her home, in the community, and in the church." Mrs. Phyfe was the former Mary Ann Pulling, the third wife of John Phyfe. She was born in Stamford in 1825. John Phyfe survived his third wife for 4 years, dying in 1901 at the age of 83.

Seventy-six ago today, on June 7, 1944, Carl 'Art' Reinertsen, son of Andrew and Sophie Reinertsen, was killed in action in France during the Normandy invasion. Art was born in Bovina in 1919 and was 25 years old at his death. He was survived by his parents and eight siblings, including two other brothers who were in service, Robert and Sigurd.

159 years ago today, on June 8, 1861, Isabella J. Laing was born, the daughter of James Laing and Mary Gardiner. She married Alexander Myers in 1879 and would have five children. For 38 years, she was the telephone operator in Bovina. In 1943, she and her husband moved to the Binghamton area. He died in 1947. She died in Johnson City in October 1951 and is buried in Bovina. 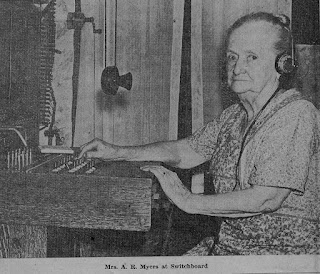 135 years ago today, the June 9, 1885 Bovina column of the Stamford Mirror, under the by-line 'Clodhopper' reported that "it is rumored that the adjoining towns need not look to Bovina for aid in building Railroads when there is not enterprise enough in the town to put up a Telephone line from Brushland to New Kingston."

Eighty-two years ago, on June 10, 1938, a three-act comedy, "The Real Jerry Jones" was given at the Community Hall. Admission was 40 cents (children could get in for 20 cents). The cast included Marjorie Ormiston, Grace MacFarlane, Arthur MacFarlane, Harvey McClellan, and Alex Hilson as George Baker, a lunatic.

119 years ago today, June 11, 1901, as later reported in the Andes Recorder, John L. Gordon and his wife arrived in Bovina for their vacation. The paper noted that he "is a policeman at Old Slip precinct station." See the Bovina NY History blog at http://bovinanyhistory.blogspot.com/2014/05/stories-from-bovina-cemeteries.html for more about John’s short and tragic life.

124 years ago today, on June 12, 1896, the village school was closed for the school year. The Andes Recorder reported that "The year just closed has been a very successful one and this has been largely due to the efficient teachers, and it is to be hoped that they may be retained for another year."

156 years ago, on June 13, 1864, a liquor license was issued in Delhi for P.D. Aitkin. Her tavern was located in Bovina where Jardine's house is today. Mrs. Aitkin's full name was Pamelia Dorcas Hilton Hamilton Aitken (1823-1883). At the time of this license, she was married to her second husband, John G. Aitken. The tavern she ran had been her first husband's, Walter Hamilton. She left Bovina in the late 1860s and spent the rest of her life in Delhi. This license comes from the Town of Bovina Town Clerk files. 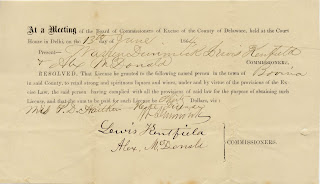 110 years ago today, on June 14, 1910, as later reported in the Andes Recorder, J. Alex Stott shot and killed a mad dog. The paper reported that the dog, belonging to E.L. Coulter, had been having fits for some time. On the 14th, "it appears to go mad and started across the hill toward S.R. Seacord's and a warning was sent out over the telephone to the neighbors." The dog traveled some distance then turned toward the Stott farm. When it got there it "was frothing at the mouth and making a peculiar noise." Mr. Stott "promptly shot it."

Eighty-two years ago today, on June 15, 1938, as later reported in the Andes Recorder, "Marjorie Russell, a student at Muskingum college at New Concord, Ohio, arrived home … for the summer."

109 years ago today, the Bovina column of the June 16, 1911 Andes Recorder reported that "Alex Hilson has purchased a new Maxwell automobile from Burr Hubbell, of Halcottville, and expects it this week."

139 years ago today, on June 17, 1881, the Bovina correspondent for the Stamford Mirror reported that "Thomas E. Forrest has received news of the death of his son Wilson, which occurred some two weeks ago near Truckee, California." William Wilson Forrest, born in 1847, died on May 19 and is buried in Nevada County, California.

159 years ago today, a Notice, dated June 18, 1861, appeared in the Bloomville Mirror: “We, the undersigned inhabitants of the town of Bovina, do hereby forbid any person or persons from fishing in the streams running through our lands after this date, under penalty of the law. Bovina, June 18th,1861. Walter Stott, Thomas E. Forest, Jas. Thomson, Jr., Andrew Thomson, David Coulter.”

109 years ago today June 19, 1911, as later reported in the Andes Recorder, "Miss Helen Blair graduated Monday from the high school at Oneonta.  Her parents, Mr. and Mrs. John Blair, Millard Blair and Miss Mary Thomson attended the exercises.  Miss Blair will enter the Oneonta Normal next fall." Helen Blair later married Marshall Thomson and passed away in 1997 at the age of 107. More about Helen can be found on the Bovina NY History blog at https://bovinanyhistory.blogspot.com/2012/12/stories-from-bovinas-cemeteries-bovinas.html

Ninety eight years ago today, on June 20, 1922, as later reported in the Andes Recorder, "Archie Boggs died in New York city … after an illness of a week from pneumonia, at the age of about 40 years. He leaves a wife, his mother, Mrs. Charles Boggs [of Bovina], and a sister."

Ninety-one years ago today, on June 21, 1929, the Hilson's new barn was the site of "a dance for the benefit of the Bovina Center fire department…" It was announced that another dance would be held a week later.

Ninety-nine years ago, on June 22, 1921, as later reported in the Andes Recorder under the headline "Bovina Boy Married", Everett Orr Russell married "Ethel Harris, daughter of the late Dr. Harris, formerly of Andes and Walton…at Los Angeles, California." Everett was the son of John A. Russell and Agnes Orr. Everett and Ethel lived in California the rest of their lives, having one daughter. In 1940, Everett is listed as a lemon inspector living in Ventura, California. He was a widower by the time of his death in California in May 1966. He was 76 years old.

121 years ago today, the Bovina column of the June 23, 1899 Andes Recorder reported that “Miss Anna Phyfe received her graduation diploma from the Oneonta Normal School this week" while "Miss Jennie Hastings graduated from Delaware Literary Institute this week as salutatorian of her class."

Seventy-seven years ago today, the Bovina Center column of the June 24, 1943 Delaware Republican reported that "Miss Catherine Banaut, a teacher at Caroga Lake, is at the home of her parents, Mr. and Mrs. Anthony Banaut for the summer vacation." (Note that Banuat was misspelled in the paper.)

Eighty years ago today, on June 25, 1940, as later reported in the Bovina column of the Delaware Republican, "A number from here were at the Junior prom at the new school at Delhi on Tuesday evening."

200 years ago today, June 26, 1820, several applications for roads were submitted to the town of Bovina. This is the application for a private road on the property of Andrew Bartram. I don't know exactly where this is located, but it appears to be in the Lee Hollow/Bramley Mountain area. 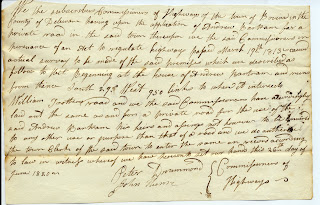 124 years ago today, on June 27, 1896, as later reported in the Andes Recorder, "G.D. Miller had tomatoes on the vines in his garden.  One measured seven and a half inches in circumference.  Next."

112 years ago today, the June 28, 1907 issue of the Catskill Mountain News reported the following concerning a lawsuit brought before a Bovina Town Justice by Ella Brown Campbell, who lived in Bovina, against her brother: "A lawsuit brought by Mrs. Henry S. Campbell against her brother, George Brown, of Arena, as administrator of her mother's estate, came up before Justice T.C. Strangeway Friday.  The suit was withdrawn, and another action immediately brought. The action is brought to secure pay for caring for the mother."

139 years ago today, the June 29, 1881 Delaware Gazette reported that "The name of the Post-office Bovina Valley, Delaware County, N.Y., has been changed to Lake Delaware."