Grandma's First Husband - "...your loving husband has been called home."

As reported in last month's blog entry, my grandmother, Anna Bell Barnhart, lost her first husband in the First World War. It was a month before she got the word of his death. She received numerous expressions of sympathy after the death of her husband. Not just cards either, but letters.  Probably the very first letter was written the day she got the news.  It came from her future brother-in-law, James Boggs, dated November 15, 1918.

Dear Friend Annabell;
I have just heard tonight of the news you have received that your loving husband has been called home.  My heart goes out to you in love and sympathy in this time of sorrow and bereavement.  I know you will be trusting in Our Heavenly Father who gave us our loved ones and also called them home.  Gods ways are not our ways, but we must say in all things “Thy will not mine be done.”
There is not much that I can say to comfort you.  I know you will see many lonely weeks and months and I know how much a little human sympathy means in a time like this.  I will remember you often in prayer and ask Him that He, who doeth all things well, will give you strength to bear it and that he will find up your broken heart with His unfailing love.  I know it will be well with James, he was always so kind and noble and true to everything on the side or right.  Give my sympathy to James’ mother when you see her and tell her for me that he was a clean and noble christian boy.
Accept again my heartfelt sympathy for yourself and all your loved ones and may God bless and keep you in His love.
Sincerely your friend, James A. Boggs

Some of the letters she received were briefer than others.  Another future in-law, Viola Russell, sent a short note on November 22 expressing her sympathy.  Another fairly brief note came from Mary Oliver of Andes, dated November 18.  In it, she says that she “can’t helping think that you may hear good news yet.”

My Dear Annabell
I wish to express to you our sincere sympathy in you[r] sorrow, but the Good Lord knows best his ways are not our ways.  Remember it was Jesus who said “Blessed are they that mourn for they shall be Comforted” and I for one know he is the only one to go to in time of trouble.  His grace is Sufficient.  Now Annabell when we get down in our new home you and Edith must come and see us.  May the good Lord comfort you and give you strength to bear your great sorrow.
Mrs. J.A. Irvine and family

A letter came from Arena with a November 26 postmark from her friend Blanche.  It has a different tone from some of the letters she received:

My Dear Old galie;
I am now writing you and telling you how my kind feelings to out for you dear in all your trubles as I saw by the paper you[r] brave husband was one of the unfortunate ones.  We are all so happy that it is over.  Now I have one soldier bro and one sailor bro one has been away from over a year and I never saw him.  We hear from them real often.  How are all of you people?  Is Edith married yet? & how about Ralph?  I must come up and stay long enough to visit all of my old friends again.  I am still the same Blanche.  Just as much as ever.  Wish I could see you to sympathize and cheer you are you with your mother’s now? How is Will’s people? Also Johns?  I hear that Cecil Russell has the store now.  How is his wife?
Write when you feel like it and tell me all the news.  Love Blanche

On Sunday, November 24, the Bovina U.P. Church held a memorial service for James, joined by the Andes Presbyterian Church. 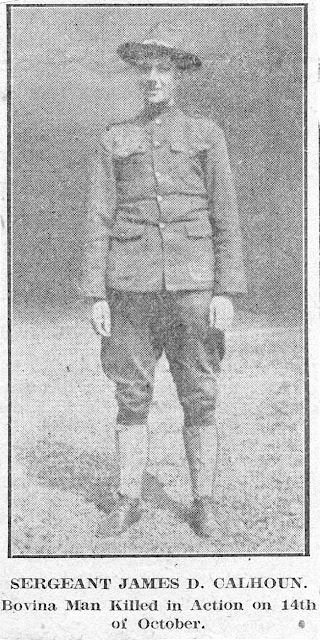