On October 23, 1918, my grandmother received the last letter she would ever receive from her husband James D. Calhoun. Written from France in September, she did not know that by the time she received the letter that James was already dead.

James died 100 years ago today on October 13, 1918 near a town called Montfacon, France (though the first notice of his death said he died on the 14th). Anna was notified by telegram on November 16, two days after her first wedding anniversary and five days after the Armistice. 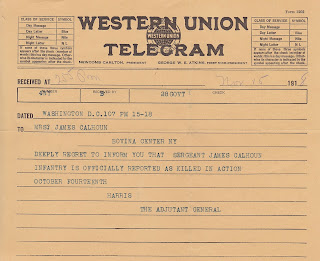 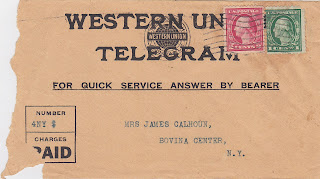 Over the next few months, Anna Bell contacted a number of people to find out more about the circumstances James' death. A letter from Lieutenant Charles Allen written January 14, 1919 from Anderauch, Germany, provided her more detail about how James died:

“Perhaps I can give you what information you want.  On Sept 29 we relieved the 79th Division near Montfaucon.  We were at all times subjected to a heavy fire but your husband came thru O.K. until Oct 14th.  At all times during the actions he showed wonderful courage and was highly respected and loved by all of the men in the company including Lieut Spencer and myself.  I was slightly wounded on Oct 12 and left for the hospital but the particulars I received were that on the night of Oct 14th James and Lieut Williams were sleeping together and a shell landed near.  A large piece struck James killing him instantly.  Lieut. Williams suffered the same fate.  James was buried just east of Montfaucon near the town of Romange and Cierges.”

Another version of the story was contained in a letter from Emma Y. Dickson, also from Anderuach, Germany, dated January 20, 1919.  She worked in the YMCA of the 7th Infantry and she noted that “I feel as if they were all my children, so when the list comes in of the brave boys who have ‘gone west’ I too feel it very deeply.”  She received permission from James’s captain to write with more details:

“It happened on October 13 near the town of Cunel.  The first battalion was about to attack but there were some German machine guns concealed in the underbrush at the right and it was necessary to clear them out before the advance could be made - so Sergeant Calhoun volunteered to accompany Lieutenant Williams and arrived with hand grenades they bravely started to clear the way for their comrades, and it was while doing this courageous thing that the same shell brought them both instant death.”

About 9 months later, Anna received a letter from the mother of George Votee, who served with James in service.  She reported that her son was back home and had responded to Anna’s letter to him last winter.  “The letter must have been lost.”  She went on to report that James was killed during the Battle of the Argonne.  Her son was in the same battle but not together with James.  He was not with him when he was killed but heard about it the next day.  James was hit with a shell fragment - “he was cut clean through.”

I sometimes wondered if telling Anna that James was killed instantly was a way to save her from thinking he suffered, but about two years after my grandmother's passing, I ordered the graves registration records for James. When his body was exhumed for shipping to the US his head was missing, so in this instance, James did die quickly.

The aftermath and impact of James' death on his family and friends will be presented next month.