This Day in Bovina for August

Sixty-six years ago today, the Bovina column in the August 1, 1952 Catskill Mountain News reported that "Willis Davis has been drawing the milk for Roy Hadley while he has been on his wedding trip." The same column also reported that "Fred Henderson and Andrew Reinertsen have commenced a carpenter job on the house of Ralph Barnhart at South Kortright.

Eighty-nine years ago today, the Delaware Express for August 2, 1929 reported on the "Perils of Hay Harvesting." The article went on to report that "Three Residents of Bovina Victims of Seasonal Accidents." Mrs. Ray Thomson broke her hand when a horse stepped on it. Fred Bramley fell from a load of hay, breaking his shoulder. And C.A. McPherson was injured when a piece of a wagon he was driving broke. Here's the full article. 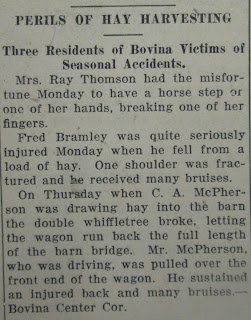 123 years ago today, on August 3, 1895, the Bovina ball team went to Delhi to play their team. They not only lost, but were heavily plagued by injuries. The Andes Recorder reported the injuries: "Chan [probably Chauncey] Squires and Leonard Thomson collided while running to catch a fly and were badly cut about the face. Thomson's cheek was cut so that the services of a physician was required to sew it up and while the doctor was at work dressing the wound John L. Gordon [1871-1908, son of Thomas Gordon and half-brother of Margaret Gordon] and Andrew Seacord [1872-1913] fainted. Al Thomson fell on his arm and injured it so that he was disabled." The paper concluded its report by noting in an understatement that "Taken altogether it was an exciting game."

134 years ago today, the August 4, 1884 Delaware Republican reported that "Rev. O.R. Bouton returned to Bovina on Wednesday evening to gather in the Fresh Air Children for their home voyage yesterday. We learn they were to entertain their hosts with music, recitations, etc., at Brushland, on Wednesday evening, and have no doubt the entertainment was an interesting one. They will return much profited by their trip."

Mary Rotermund was born 173 years ago today, August 5, 1845, in Andes. She was the daughter of Herman and Adelaide Rotermund, both natives of Hannover, Germany. Mary married James A. Coulter in 1868. Widowed in 1882, she died in Bovina in 1931. She was the grandmother of Ruth Coulter Parsons and her sister, Celia Coulter; Don, Bob and Norrie Boggs, and Millard, Art and Ernie Russell.

Ninety-three years ago, on August 6, 1925, as reported later by the Andes Recorder, "Elmer Gladstone was attacked by a bull and knocked down. Fortunately, the bull then walked away a short distance and before it could renew hostilities Mr. Gladstone made his escape.  All the other members of the family were absent from home."  Elmer probably was Robert Elmer Gladstone, the son of George and Helen Gladstone.  This likely happened on the Gladstone farm, located on what is now known as Bob Hall Road.  Elmer was 49 when this accident happened and would live to be almost 81, dying in 1956.

117 years ago today, on August 7, 1896, as later reported in the Andes Recorder, "The union Sabbath School picnic in Michael Dickson's fine grove last Friday passed off very nicely, and all appeared to enjoy themselves. The sports were numerous. There were races by the little folks, then a tug of war between the married and single men, but the young men were sharp, laid down and neither side won. After dinner D.L. Thompson, master of ceremonies called the assemblage to order and invited the ministers, superintendents and their wives to the platform and Mrs. Myres recited "Deacon Jones' Prayer," and Revs. Lee, Buck, Myres and Samson made short addresses. Sports were again indulged in, and the short and also the four-mile bicycle races were won by Elmer McNair, the foot race between John Gordon and Milton Hastings was won by the latter. It was estimated that there were five hundred people present."

Leroy Worden was born in September 1899, the son of David Champ Worden and Harriett Boyd. He was married to Eleanor Campbell. Roy was my next-door neighbor throughout my childhood. This Bob Wyer photograph was taken in May 1943. Photo courtesy of the Delaware County Historical Association. 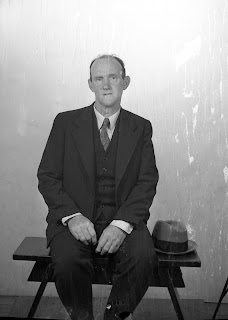 Ninety years ago today, on August 9, 1928, three year old John Storie, the son of Mr. and Mrs. William Storie, fell and broke his collar bone.  The accident happened at the home of his uncle, Fletcher Davidson, while he was at play with his little cousins.  This is where the Denisons live now.  Tragically, John would die in another childhood accident while, again, playing with his Davidson cousins.  In January 1938, when he was 12, he was sledding with Alan Davidson when he was thrown from his sled, rupturing his spleen.  His spleen was removed but he died about three days later.

131 years ago today, the August 10, 1887 Delaware Gazette carried the following report from the Bovina correspondent of the Dairyman newspaper (Franklin, NY): "David Sloan and Peter McNair went to Hobart last Monday, after Dr. McNaught to come and visit McNair's wife. They did not return that evening, as expected, nor the next. Alex. Hoy became alarmed about his horse and wagon and on Wednesday he sent David Finkle to bring the horse home. He found them at Bloomville, where they had driven through the rain on Tuesday. They had imbibed too freely at Hobart and had upset or in some way had broken the wagon and were in a sorry condition. McNair came home with Finkle, but Sloan was not satisfied and went on to Delhi and has not returned yet."

One hundred and seventeen years ago today, on August 12, 1901, work was commenced on construction of the Bovina Center creamery. 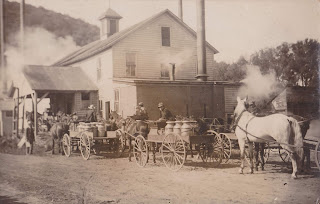 Harold Hall was born in October 1912, the son of Harrison Hall and Elizabeth Kinch. He was married to Mildred Hitt. Harold was 91 years old at his passing in 2004. He worked for many years for McIntosh Farms. Bob Wyer took this shot of Harold in September 1944. Photo courtesy of the Delaware County Historical Association. 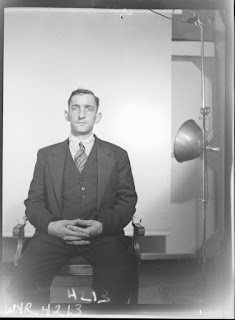 Seventy-eight years ago today, the August 15, 1940 Bovina column of the Delaware Republican reported that "The Bovina Recreation Club will hold a garden tour on Thursday, starting from Mrs. John Hilson's home at 10:30 am."

A special school meeting was held in the Coulter Brook district one hundred and seventeen years ago today, August 16, 1901.  As later reported in the Andes Recorder, "both those for and against a new school house had their forces marshaled and the result was a tie vote.  The result will probably be that the Commissioner will condemn the old shell of a building now in use."

Sixty-eight years ago today, the August 18, 1950 Catskill Mountain News reported in its Bovina column that "Miss Matilda Menke, who will become the bride of Paul Rabeler Aug. 27, was honored at a shower recently at the home of Miss Hilda Goldhammer."

Seventy-five years ago today, the Lake Delaware column of the August 19, 1943 Delaware Republican-Express reported the following: "A group of players from the Lake Delaware Boys' camp will entertain with a play at St. James parish hall on Thursday evening of this week. Everyone is welcome. No admission will be charged. The entertainment will be followed by dancing and refreshments."

The Bovina column of the Delaware Republican reported seventy-six years ago in its August 20, 1942 issue that "John W. McCune, for many years sexton of the Bovina U.P. Church passed away at his home here early Saturday morning. Funeral services were held from the home on Monday at 2 p.m., the Rev W. Wade Miller officiating." 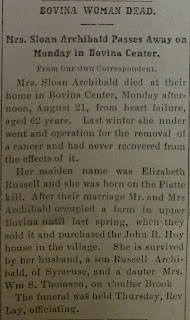 James Burns was born in April 1917, the son of William Clinton Burns and Emily Eleanor Elliott. He owned a farm on Pink Street for many years (the farm is now owned by his son Thomas). He was married to Helen Bowen and passed away in March 1994. These photos of Jim were taken by Bob Wyer in May 1945 and May 1952. Photos courtesy of the Delaware County Historical Association. 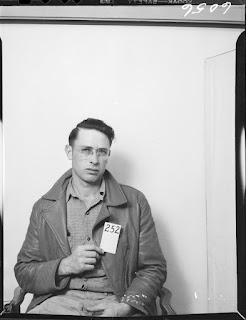 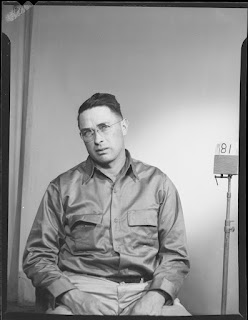 107 years ago today, August 23, 1911, as later reported in the Andes Recorder "The school controversy in the D.J. Miller district was settled at a special meeting Wednesday evening by the district voting to have school this coming year. For several years the pupils of this district have been sent to the Center school." The Miller district was at the intersection of Miller Avenue and Lee Hollow.

Seventy-four years ago today, the Bovina Center column of the August 24, 1944 Delaware Republican-Express reported that "Mrs. James Foy and son Richard are spending a few days at the home of her parents, Mr. and Mrs. Claude Erckson (sic). Mrs. Erckson is ill." Mrs. Erkson would pass away the following February.

The Bovina Town Picnic was held ninety-seven years ago today, August 25, 1921. The Oneonta Star reported on the event the next day under the headline "15,000 at Bovina Town Picnic." The article noted that "Aside from the feasting, there were wheelbarrow races, a tug of war and a baseball game for the amusement of the throng, while the Delhi band with its music added to the enjoyment of the day. Reminiscent speeches were made by Hon. Lincoln R. Long, member of assembly from Delaware county, and Rev. Marvin Thompson of Troy.

Seventy-five years ago, the August 26, 1943 Delaware Republican-Express reported in its Bovina column that "Miss Evelyn G. Lay was the guest of her friends, the Misses Ruth Thomas, Mary Hart and Frances Harner of near Afton last week Thursday. All visited the Afton fair in the afternoon. She was also a week-end guest of her friend, Miss Vesta Norwood at Norwich. All are employed on the 11 p.m. to 7 a.m. shift in the Scintilla plant at Sidney. Miss Norwood is floor-lady in Dept. 27." Evelyn was the sister of Clark Lay.

Eighty-seven years ago today, August 27, 1931, as later reported in the Andes Recorder Bovina column: "Born to Mr. and Mrs. Benson LaFever on August 27, a son - Charles Raymond." Dad had two license photos taken by Bob Wyer, the first in August 1949 (two days before his 18th birthday) and again in May 1952. Photos courtesy of the Delaware County Historical Association. 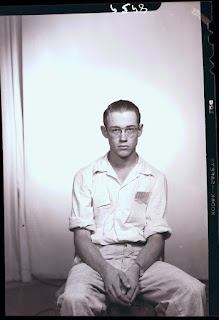 104 years ago, the August 28, 1914 Catskill Mountain News published a small article entitled "Gerry Will Build Road." The article noted that "Robert Gerry will have a stone road built from where his private road connects with the highway in southern Bovina to the top of the pitch above T.C. Strangeway's. The town of Bovina will probably put on a team or two. Work is expected to commence about the first of September."

Seventy-eight years ago today, the August 29, 1940 Delaware Republican reported in its Bovina column that Misses Helen Hotchkin and Jean Ditty went to New York City on Sunday to spend a week with friends and visit the World's Fair." The same column noted that "Mr. and Mrs. Marshall Thompson of Manhassett, L.I. are visiting her parents, Mr. and Mrs. John Blair."

Fifty-three years ago today, on August 30, 1965, as later reported in the Delaware Republican Express, "Many of the Bovina people awakened [in the morning] to find their gardens frozen. Some gardens were badly hurt, while others were not damaged nearly so bad. Several have had killing frost every month since they were planted."

178 years ago today, on August 31, 1840, Revolutionary War vet James Vanderburgh died, aged 83 years. He is one of three Revolutionary War Soldiers buried in the town. See the Bovina NY History blog at http://bovinanyhistory.blogspot.com/2012/11/stories-from-bovina-cemeteries-american.html for more about Bovina's Revolutionary War soldiers.